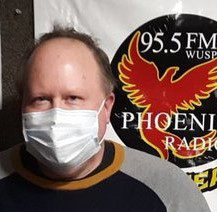 I am writing this column on Monday, March 29th. Sweat is running down my back, yet at the same time, my hands are cold as I type. This past Friday, I received my second dose of the Pfizer COVD vaccine. Most of the side effects are finally subsiding, but I was too sick to write this column until now, two hours before it’s due.

Originally I hadn’t intended to get the shot. Having had Chronic Fatigue Syndrome for ten years made me hesitant. It’s been about six years now since I recovered, or perhaps a better word, is gone into remission. I’ve always felt as if the cause of my CFS-whether virological, bacteriological, is still inside me, kept dormant and suppressed by luck and colloidal silver. I was very reluctant to “poke the bear” by injecting something to trigger an immune response directly into my bloodstream.

But ultimately, I decided to “believe the science” and the positive reports from a private FB group where people with CFS share their experiences with the vaccine. I made up my mind on Wednesday, March 4th, that I was safer getting the vaccine than not getting it. I know it was then because the next day, when I went into work, the superintendent emailed the staff and faculty a link to sign up for vaccination at the Turning Stone. I clicked the link, and that Friday night, I was rolling up my sleeve.

The first dose hit me a little harder than most, but the side effects passed. Between that first and second dose, I managed to squeeze in an interview with someone who, at the time, was still waiting for the opportunity to get the vaccine.

Lisa Matte is the Director of Jervis Public Library in Rome, NY. I learned from her that libraries have not only been busier than ever since the COVID shutdowns they are in the frontlines in the fight against the pandemic. They have helped people do everything from accessing the vaccine sign-up websites to printing out the confirmation tickets once they have gotten their appointments.

“Libraries are community centers,” Matte told me. “The three most popular things we had last week are vaccination requests, tax forms, and snowshoe borrowing. We are doing as much as we can.”

Not surprisingly, people have been contacting them regularly for the most information about COVID.

“They want a trusted partner,” Matte explained. “There is a lot of distrust out there and a lot of negativity.”

It’s been hard on the staff to limit access to the building, but they’ve had to do it, both for their safety and the patrons’ safety. Not only do they serve many vulnerable people, but if their staff were to become ill, they would have to close.

Still, Jervis Public Library has made sure their patrons know that the staff is there for them and temporary measures resulting from the pandemic will not break the connection. One way they did this was to literally call each person on their list of patrons to check on them and offer reassurance.

“We divided up the huge list we had,” Matte recalls. “We called to say, ‘Hi, how are you doing?’ We reminded people that we could print and mail things to them. Some people said, ‘I haven’t talked to anyone in two weeks. It is so good to hear someone’s voice.’ These aren’t just numbers to us. These are people we care about.”

Matte recently summed up all the things libraries offer to their communities on her personal Facebook page. Her stirring words were in response to a journalist from Fox News questioning the role libraries played in COVID relief.

“Chris Wallace really just asked what aid for libraries had to do with COVID relief.  How about you ask someone who actually uses a library when in-person government services are halted?  Or the role libraries are playing in getting folks vaccinated? Or what folks are doing when they have no Internet access and need to take classes, apply for jobs, and check-in for unemployment benefits online?  Even before COVID, libraries provided these services with inadequate funding. Now, libraries (with reduced staffing due to reduced funding) are on the precipice, maybe even hanging onto the wall and trying to get back up to the edge of the precipice. The building isn’t what provides the services; it’s the trained, credentialed people working there who provide the services.  The Work From Home period proved this every day.” 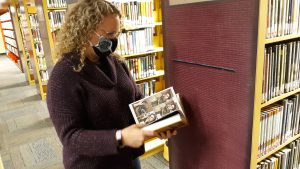 In our interview, she described libraries as a point of synthesis of information and results. She said that people want to leave with a “product,” and while that product can be a book or a DVD, it can also be a resume, a tax form, a paper copy of their vaccine appointment, or even snowshoes.

“I’m a librarian because I want to help people,” she said. “I don’t know where else people would if libraries didn’t exist. We serve everybody. We get to help people do so many different things that we sometimes feel like we’re Santa Claus. It is really meaningful work. If you are a public librarian, you are in it because you like to help people and participate in the community.

When we concluded our original interview, she had to call and check in on one of the library’s patrons. At that point she and her staff were ineligible for the vaccine themselves.

As my deadline looms, I checked back in with Lisa Matte. I was happy to learn that in the time between my original interview and the writing of the column, vaccine eligibility has been opened to library staff. Matte has received her vaccine too.

“We’ve helped hundreds of people in getting the vaccination appointments, and we’re excited to part of the solutions,” Matte said. “They can call 315-336-4570. We’ll help them do it right over the phone.”

While I wrote this column on a late Monday afternoon, my symptoms subsided, and I felt confident I had made the right decision. As I left the house, I noticed the crocuses had come up over the weekend—the first blooms of spring. A year has passed since I’ve written my first column on COVID. Maybe this can be my last.