A high number of people who took a COVID shot in the UK have reported experiencing harmful effects. This data is collected in official database that is voluntary much like the CDC’s VAERS system in the US. These reporting systems exist to identify issues with vaccines which might not have been previously known about.

A recent report issued by the UK-based Evidence-Based Medicine Consultancy Ltd calls for the UK version of the FDA to completely stop giving COVID vaccines to humans.

Their report states that in 2021, between January 4th and May 26th 1,253 deaths and 888,196 adverse reactions were reported. They broke these down in to 6 main categories of adverse drug reactions (ADRs).

A. Bleeding, Clotting and Ischaemic

A. There were 13,766 bleeding, clotting and ischaemic reactions identified, 856 of which were fatal.

B. A total of 54,870 reactions and 171 fatalities fell into the immune system category.

C. Pain reactions accounted for at least 157,579 reactions in total. A large number of these were joint and muscle pains. Among Congenital Disorders (usually conditions present from birth) there were 11 reports of Paroxysmal Extreme Pain Disorder, which is an extremely rare inherited disease caused by a genetic mutation.

D. An additional 185,474 were categorized as Nervous System Disorders. A wide variety of neurological issues were noted, including 1,992 involving seizures and 2,357 involving some form of paralysis, including 626 cases of Bell’s palsy. There were 33 cases of dementia reported following injection.

F. Given that vaccinated pregnant women comprise a small proportion of the vaccinated population at the time of this report, 307 appears to be a high number of Pregnancy adverse drug reactions. This includes one maternal death, 12 still births and 150 spontaneous abortions. 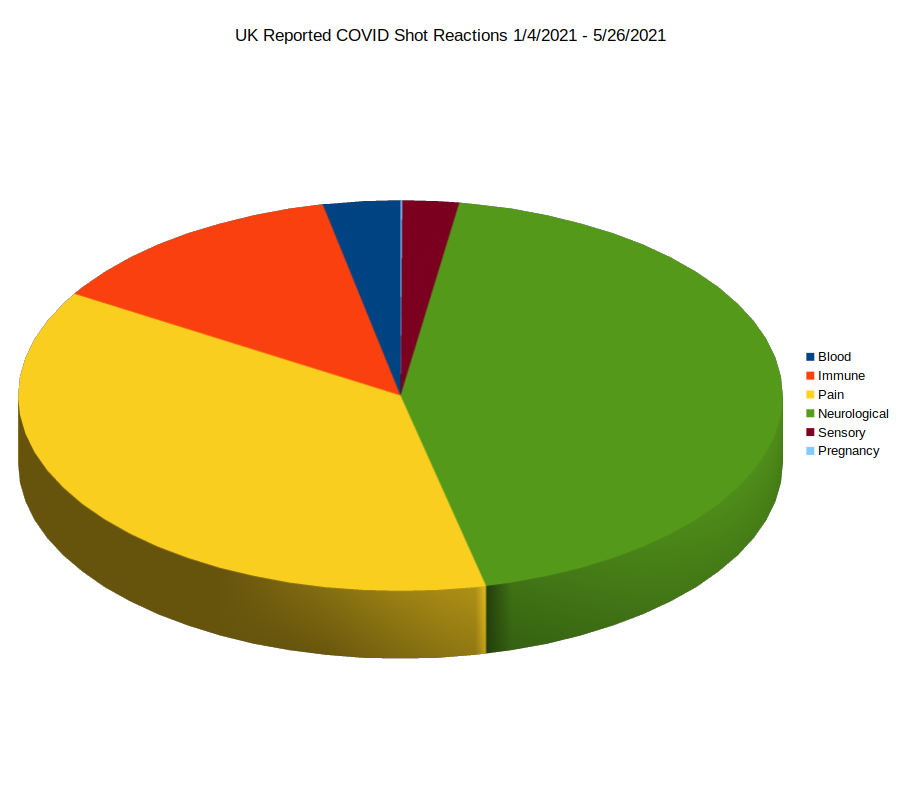 The authors note, that they, “understand that information on reported Adverse Drug Reactions should not be interpreted as meaning that the medicine in question generally causes the observed effect or is unsafe to use. “We are sharing this preliminary report due to the urgent need to communicate information that should lead to cessation of the vaccination roll out while a full investigation is conducted.“

The authors of the report also refer to a recent paper by Seneff and Nigh, that shows potential acute and long-term pathologies from COVID injections include:

•Emergence of novel variants of SARSCoV2

•Integration of the spike protein gene into the human DNA

The striking point here is that vaccine-induced harms are mediated through the vaccine spike protein.

It is now apparent that these products in the blood stream are toxic to humans.

This is why Evidence-Based Medicine Consultancy Ltd is urgently calling for an immediate halt to the vaccination program, while a full and independent safety analysis is undertaken to investigate the full extent of the harms.