The people or politicians: whose voice matters? 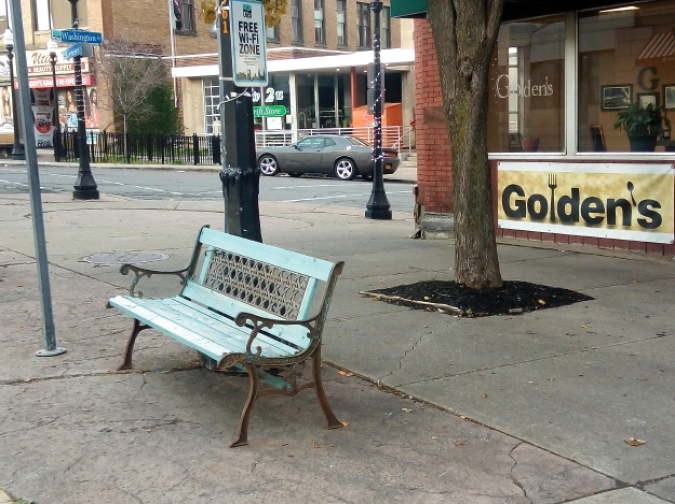 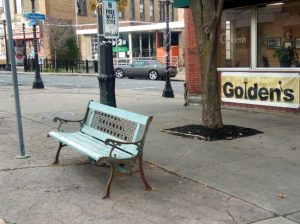 This story focuses on the title question. It details observations noted on a walking tour of Utica. Noticeable these days is the lack of or disappeared benches, public rest stops in public places.

Examples include: Oneida square/circle, at least 6 benches once located there have gone missing, the nurses memorial park on Genesee st. likewise the Fire Station on Park Ave. Question: at whose expense were they placed there and under whose authority were they removed? The answer to the former question is the Utica and NY state tax payers. The later question; was this done by common council vote, Mayoral fiat or??…..you tell me.

An entire structure, the pavilion at MLK park on South St. was installed some years ago and last year was removed. The remaining flat slab of concrete cost $2,600 to place. A rough estimate of the pavilion’s placement and removal is roughly $24,000. The above two questions apply to this public park fixture as well.

If the people can find no place to rest, don’t be surprised by their unrest. The following incident occurred on July 12, 2020: A sixty two year old Utica resident was waiting at the Centro Bus Stop, Genesee St. across from the Gaetano  Veterans Center near Golden’s Restaurant. As there was no public seating at the time, he found an empty chair and table on the sidewalk next to a sub shop and proceeded to roll and light a cigarette. The man was quickly informed he could not sit and smoke at that table. After some brief words were exchanged our man was heard to say “have it your way”, and proceeded to pick up the cast iron table and chair and gently relocate them on the double yellow line in the middle of Genesee S, where he sat and finished his cigarette.

The act of civil disobedience begs the question of to whom does the sidewalk belong and what are the rights of the citizenry in public places? The old man stated he realizes that business owners and property owners pay their share of taxes to the city. Likewise , the old man has been smoking a pack a day for over 40 years now. A quick estimate of cigarette taxes paid to the state over time is over $58,000 by this individual.

Why do I even bring this up? Because, shortly thereafter a bench was placed at that bus stop with an attached cable lock. Come to find out that the bench was donated and installed in a cooperative effort by two Utica business people, enacting a change the city seems unwilling to.

The entire MLK park was professionally designed and built as a public space. The pavilion had become a gathering place for the local street crowd. These were mostly young castaways there for reasons, for many it was drug use, often synthetic marijuana. The pavilion served as a gathering place for some less fortunate Utica citizens, and as such, a convenient place to offer outreach and assistance. At that time counselors from Utica Homeless outreach would visit and offer what services are available. First aid supplies were left there, on two occasions I personally cleaned and dressed  open abscess  needle wounds on the arms of injection drug users. Other vital resources like free condoms could also be found there. And yet, apparently the solution to help these Uticans was to remove what shelter there was, and to disappear the poor and needy instead of providing real assistance. Who decided the weak and poor are  the enemy and declared this some sort of victory?

This story is not over. No readers, I’m just getting warmed up. I plan to present this to the Mayor. I demand answers. I shall follow up with what I learn.. Till then, I will be squatting where I please.