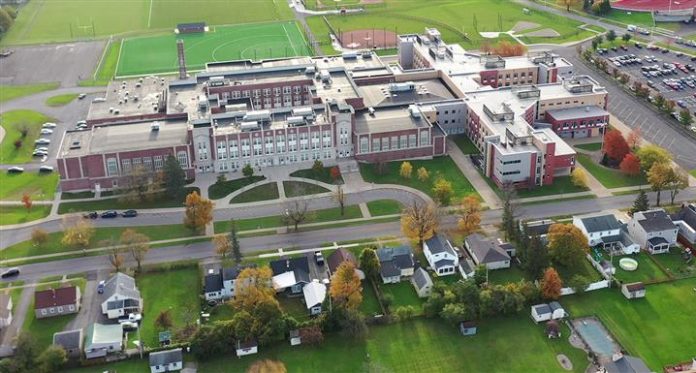 The Utica School Board is bringing trades education back to the inner city. On Monday night, November 21st, at JFK Middle School, Utica SB superintendent Bruce Karam presented information to the public about the plan for expanding Proctor to include a wing for education in the trades. The goal is to give youths an opportunity to learn things like carpentry, auto mechanics, early child development, etc within their own backyard rather than going all the way to BOCES where trades are currently taught.

According to Karam, the Utica School District housed all of these educational opportunities up until the late 1980’s when they were all moved to BOCES. Karam says that a major problem for Utica students at UFA and Proctor is that if they want to learn anything practical like the trades, it comes at the cost of their primary education. Thus, the need for a new Career & Technical Education (CTE) school within the proctor where students will be able to take trade courses as electives in addition to their standard classes, and have the flexibility that is lacking for them at BOCES.

The public,  including concerned parents and other active community members, voted on the proposed CTE School on December 7th in a public referendum. The proposed school will only cost $17,995,000 to build and the Utica School Board states that this will not increase taxes for Uticans. Once operational in 2024, the school will have 13 teachers and about 220 students (expected to increase to 440 students by 2027). The School Board is establishing job shadowing opportunities with local unions so that they can offer their potential students real life experience.

Former mayor Tim Julian supported this proposal with great enthusiasm as he believes that getting Utica’s youths into local practical jobs that pay well is a great way to lift the city in general.

Lou Parrotta, a local educator,  had this to say about the current problem with Utica kids having to go to BOCES and why he thinks they need closer opportunities: “I have students who miss 15 minutes of my class. We have block scheduling – it’s 90 minutes, 80 minutes. They [BOCES students] can get out 15 minutes early, multiply that by 90 classes and they’re missing over 900 minutes of school of a core class that is taking a regents exam at the end of the year. We have counselors that I’ve spoken to, who have juniors and seniors who don’t want to miss their junior and senior year when they’re the leaders of the school because they have to travel half an hour there and half an hour back. So, it’s [the proposed school] a win-win. I wholeheartedly agree with it. My students will get an opportunity to do both: [learn a trade] and they get the opportunity to take a course like my advanced government class (which you get college credits from). But I have it [advanced gov] in first block and last block, so if you don’t have that flexibility in the middle of the day for travelling then you can’t take one of those classes because you’re traveling and you have to take a science class or a physics class or something like that.”

Facebook
Twitter
Previous articleNatives Have the Highest Rate of Death by Cops
Next articleThe people or politicians: whose voice matters?