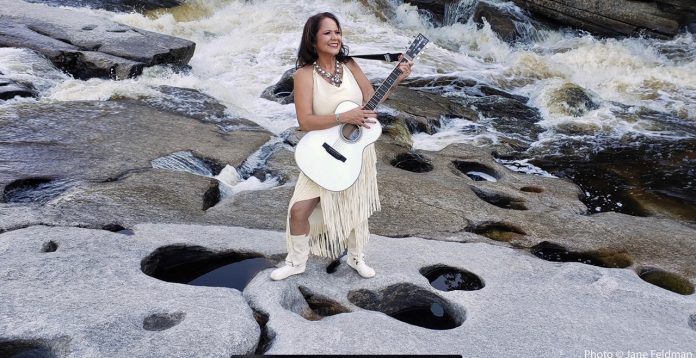 She had a bright voice like liquid gold, a luminous heart, and a magnetic smile.   Joanne Shenandoah-Tekaliwakwah, one of the most renowned Indigenous musicians on the Native American music scene, nurtured the spirit, inspired joy, and shared her love of laughter and her people with audiences around the world. She passed into the spirit world on November 22, 2021, at the Mayo Clinic in Scottsdale, AZ at the age of 64.

Joanne was known as a matriarch of Indigenous music. Given the Oneida Wolf Clan name “Tekaliwakwha” meaning “She Sings”, she fully lived into her name. She was publicly acknowledged as the most prolific and creative Indigenous songwriter and performer of her era. She was a cross-cultural artist who released 24 award-winning albums and inspired many artists in the burgeoning Indigenous music industry. Teaching Haudenosanee culture was paramount to Joanne, and her people’s principles of peace were woven throughout her songs, performances, and humanitarian efforts.

Joanne was a visionary trailblazer who has left an impactful global legacy.

Her original musical compositions blended ancestral Haudenosaunee melodies and songs with contemporary lyrics and instrumentation. Her innovative recordings ranged from Indigenous to world, folk, pop, new age, and country — she was in a genre that could truly be called her own. Joanne was adept at picking up any instrument she was interested in. She played the guitar, piano, flute, and cello. In 2005 Shenandoah was awarded a GRAMMY for the album Sacred Ground: A Tribute to Mother Earth. Among her more than 40 awards, she received two additional GRAMMY nominations, an unprecedented 14 Native American Music Awards (NAMMYS), multiple Syracuse Area Music Awards (SAMMYS). Globally, she received multitudes of accolades for her stunning creativity, beautiful vocals, and teachings.

Joanne’s remarkable talent as a singer took her around the world with performances in Australia, South Korea, South Africa, Turkey, and across North America and Europe. She sang before audiences at prestigious concert halls and festivals in performances  that included opening the first Woodstock revival in 1994 accompanied by a large Haudenosaunee contingency who joined her with song and dance; performing for Earth Day on the National Mall in Washington DC before 400,000 people; singing for the Dalai Lama; at Madison Garden for Seeger’s 90th birthday celebration with Bruce Springsteen, Kris Kristofferson and Dave Matthews; at the Vatican for the canonization of the first Native American saint, Kateri Tekakwitha; at the Grand Ole Opry, Sagrada Familia Barcelona, and the Parliament of the World’s Religions (South Africa, Spain, Australia, Canada.)

Musicality flows through the Schenandoah family. Joanne was often joined on stage by her daughter Leah and sister Diane Schenandoah singing in exquisite three-part harmony. Both are featured in many of Schenandoah’s recordings.  “Joanne said her lyrics came to her as gifts from the ancestors,” said her sister Diane. “The first time Jo, Leah, and I sang together, our voices blended so beautifully it made us cry, it felt sacred.”

Joanne starred as a headliner at Foxwoods Casino on many occasions where she opened for musical legends such as Smokey Robinson, Randy Travis, and Willie Nelson. She also sang a musical rendition of “Dawn Treader” at Carnegie Hall in 2006 for a musical tribute to Joni Mitchell. Joanne traveled extensively and ensured she performed for her own Indigenous relatives in hundreds of Native American communities. Joanne shared the stage with musical stars such as Odetta, John Denver, David Amram, and Indigenous greats such as Rita Coolidge, Redbone, Robbie Robertson, Floyd Westerman, Ulali, and R. Carlos Nakai.

In 1989 Joanne released her first album titled “Joanne Shenandoah”. She recorded a top-hit electronica song in Germany called “Nature Dance” with producer Arian Beheshti in 1991. She later composed the symphony “Skywoman, A Symphonic Odyssey of Iroquois Legends” with German guitarist and composer, Gerhard Rebmann, and which was produced by Tom Wasinger. Joanne performed Skywoman with Leah and Diane, with the Syracuse orchestra Symphoria at the Civic Center in Syracuse, NY, and with the New Mexico Symphony Orchestra that was featured on PBS. She also co-authored the book “Skywoman: Legends of the Iroquois” with her husband Doug George-Kanentiio.

Being embraced by Native American musical legends gave her a boost at the start of her career. Her second album Loving Ways was recorded with the late Apache musician, A. Paul Ortega in 1995. Joanne was fond of saying that he told her to never decline a request to sing and to always share her musical gift that the Creator gave her and that Cherokee musician Loretta Lynn told her to stay after her concerts until the last fan has left.

Some of her songs also foretold prophecy and broken promises. She co-wrote “Treaty” with her good friend and musical great Neil Young that is featured on her album Eagle Cries that urges US Presidents to honor their word. She inspired people to care for the planet in “They Didn’t Listen” and Mother Earth Speaks. In her recording of “Prophecy Song” she blends spoken English with Anishinaabe language singing, calling us to awaken; saying that “We are now reminded to be aware of our place upon his earth. And to fulfill our obligations to ourselves, our families, nations, the natural world and to the Creator,” adding “The words say, ‘We are to awaken, stand up, be counted, for you are being recognized in the spirit world.’”  Joanne’s music was meditative, healing, and uplifted the spirit. Her lyrics helped comfort those suffering from grief, healing from physical ailments, and is often used in the delivery of babies, surgeries, and played for those transitioning to the spirit realm.

Beyond music albums, she composed music for a number of film and television shows, including “Indian in the Cupboard”, “Transamerica”; the Indigenous film “Dance Me Outside”; the Silver Telly award-winning film “Warrior in Two Worlds” and 2019 Emmy nominated PBS Series “Native America”. She acted alongside Ron Perlman, James Le Gros, and Connie Britton in the film “The Last Winter” directed by Larry Fessenden. Her film credits can be found on IMDB. For her life’s work, she was, bestowed an Honorary Doctorate of Music from Syracuse University in 2002, and in 2007, she received both a Lifetime Achievement Award from the National Native American Music Awards and entered the Hall of Fame at the Syracuse Area Music Awards. You can find Joanne’s music on Spotify, YouTube, and secured at Apple Music, Amazon, and via her website: http://www.joanneshenandoah.com.

Joanne was driven to aid and inspire where there was a need. She supported many causes and offered free performances for musical benefits across the country and loved performing for elders in nursing homes. As an advocate for Native American music, she supported Ellen Bello, president of the Native American Music Awards, in giving a voice to hundreds of Indigenous artists across the Americas. At the first NAMMYS awards show in 1998, Joanne’s outreach attracted Wayne Newton, Richie Havens, Robbie Robertson, the Coolidge sisters, Floyd Red Crow Westerman, and John Fusco to the stage. Joanne was an ordained friend of the East-West Interfaith Ministry alongside Nelson Mandela, the Dalai Lama, Elie Weisel, and Amma. She officiated many weddings across the country. Mentoring was important to Joanne. She generously encouraged many young Indigenous musicians to join her on stage and gave many the start to their musical careers. She focused messages of encouragement to the youth and for all people to be mindful of the next seven generations.

Joanne was a founding board member of the Hiawatha Institute for Indigenous Knowledge based on Haudenosaunee principles of peace. In 2014 she served as Co-Chair for the National Task Force of Children   Exposed to Violence for the Department of Justice at the request of US Attorney General Eric Holder and President Barack Obama.

Joanne descended from a long line of Haudenosaunee leaders. Her ancestor Oneida Chief Skenandoa (Shenandoah) was a close friend of George Washington for whom the Shenandoah Valley in Virginia was named. The Oneidas under Skenandoa’s leadership helped save Washington’s army during the Revolutionary War and from the naming of this valley, came the inspiration for the American ballad “O Shenandoah”. Chief Skenandoa worked alongside his good friend Reverend Samuel Kirkland to found Hamilton College in Clinton, NY for the education of Oneida peoples.

In September of 1991, she married Doug George-Kanentiio, Akwesasne Mohawk journalist. They purchased Tkanalohale, the historic homestead of the great Chief Skenandoa in Oneida Castle. Joanne lived there for 28 years with her husband, daughter Leah Shenandoah, a Ph.D. candidate at Cornell, and their grandson Ryder Oroniakenrats (Beautiful Sky) Shenandoah. Chief Skenandoa lived and died here at the age of 110. Joanne had wished to turn the historic home into a cultural center.

Another relative was an international advocate for Native American rights, Laura Cornelius Kellogg (Oneida) who lived at the turn of the 20th century. In 2020, Joanne served alongside 25 Haudenosaunee leaders and community members as consultants to the Women’s Suffrage Centennial Commission that memorialized Cornelius-Kellogg in a bronze monument in Seneca Falls, NY.  At the time of her passing Joanne was working on her autobiography.

Joanne was predeceased by her parents Oneida Wolf Clanmother Maisie Schenandoah and Onondaga Pine Tree Chief Clifford Schenandoah, her beloved grandma Gertrude Schenandoah and her cherished brother Gerald Schenandoah (Cheryl, living.) She is survived by her sisters Wanda Wood, Diane, Victoria, and Danielle Schenandoah (Tony Mata), of central New York. She also departs from many nieces, nephews, and hundreds of cousins across the continent.

Joanne Shenandoah was a kind and generous soul who always found a reason to celebrate, laugh, and find gratitude in every situation. She fought a long battle for her health that began in 2015 with an infection from C. diff that led to organ failure and nearly took her life. She was gifted the last five years with her family, saw her daughter become a mother, and welcomed her grandson into the world. She will be greatly missed by her family, friends, and fans.

A national public memorial to commemorate Joanne’s life will be held in the spring of 2022. Details will be forthcoming. Private funeral services were conducted at Hamilton College on December 7, 2021. In lieu of flowers please send sympathies and donations to the care of Leah & Ryder Shenandoah & Doug George. Condolences may also be shared at https://www.faroneandsoninc.com/m/obituaries/Joanne-Shenandoah/Memories.