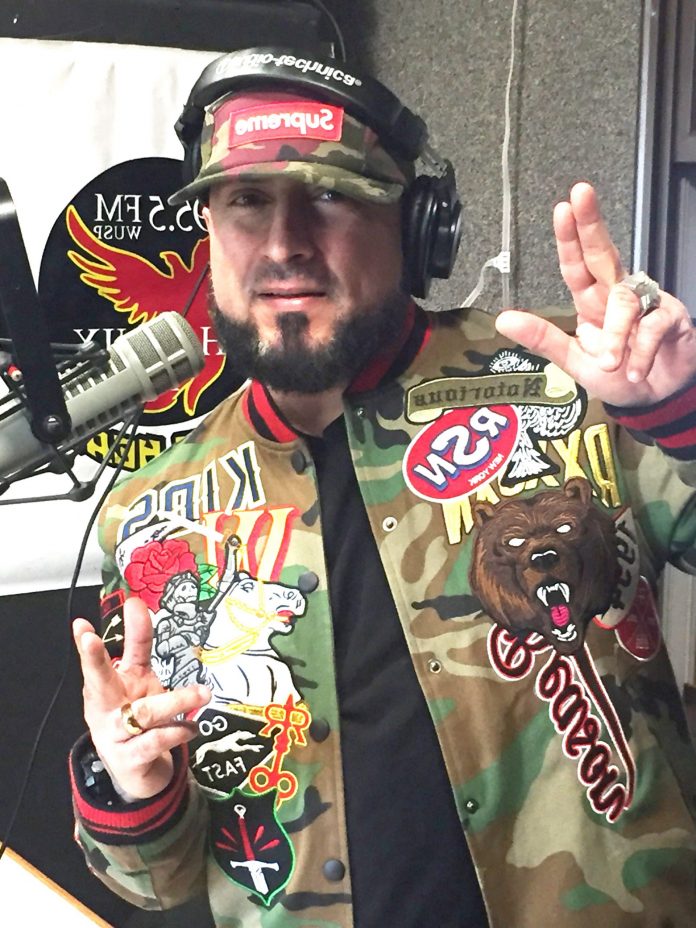 While Rap and Hip Hop music are immensely popular, some are reluctant to listen to it because of its reputation for being anti-law and anti-police. But leave it to Phoenix Radio to find a retired police officer who is also a Hip-Hop D.J.

“I usually play Hip hop, new and old school, classic material like funk music, disco and throwbacks, Carribean flavors like Dancehall, Moombaton, traditional Reegae, Reegaeton, Salsa and Merengue, I also play one of my favorites, House music from the 90’s and Deep house from sound Africa,” said DJ Salsa, whose legal name is Carlos Alberto Godinez.
DJ Salsa was led to both music and law enforcement in Puerto Rico, where he was born.
“ My youth was a very difficult one,” he explained. “I grew up without a father figure. My early years until my teen years were hard.”

DJ Salsa described growing up in an environment that encouraged bad choices, including turning to violence. He credits God, and his mother for helping him survive the crime and chaos he saw all around him.

Although a career in the music industry was always a dream, as an adult, DJ Salsa felt called to take a direct approach to fighting back against the harmful environment of his youth.

“Tired of all the violence around me, I decided to put my dream aside. I decided to join the police department in Puerto Rico. I belonged to a special operations group dedicated to wiping out the high crime statistics in Puerto Rico. In 2013, I finished my career with the S.W.A.T. team. I moved to the United States with my wife and kids that same year.”
But DJ Salsa never forgot the love of music that had been with him his entire life.
“I decided to be a DJ when I was around thirteen years old,” he said. “At my friends’ parties, I always played the music, changing the tapes around and setting up the festivities for them.”

During his early years in Puerto Rico, DJ Salsa would be further encouraged toward a career in music through getting to know many in the music scene there.

“ In Puerto Rico, I met a bunch of people who are part of the Rap and Reggaeton culture in Latin America and Beyond like Wiso G, Mexicano (R.IP), Dj Sammy Selle(M.a.p), Don Chesina, Ranking Stone, Dj Chepo, Dj Pito Volvo, Nestito Mc (R.I.P), No Mel Sindicate, Eddie D, Brewley Mc and Dj Tony Touch (Tony Toca), Red Fox and Mad Lion,” he said. “In the 1990s I also lived in New York City, and my musical knowledge grew there. I learned to be a DJ watching my friends work at parties, because I was hanging out with them most of the time.”

Finally, in 2003, DJ Salsa launched his own career as a professional DJ while continuing to tend to other responsibilities, including caring for his children.
Ten years later, in 2013, he moved to Utica, New York with his family. His first job as a DJ in Utica was at Noles Bar as a resident DJ. During that time, he was able to create a demo that would be heard by one of Utica’s greatest DJs, “Big B.” (of blessed memory). This led to his current gig, one he fills with gratitude and love for the music and for the people who listen to it.

“My full Dj Name is ‘DJ Salsa From The Movement, Salsa because salsa means sauce in English and usually we use the sauce to add some extra flavor to our favorite food, right? In this case the menu is the music and I’m the sauce that add the unique touch to the sounds, the sounds that make a simple joint a special one.” he explained.

In addition,, the Movement represents the urban culture inside the music and everyone else who really loves and enjoy the music in all aspects, no matter if they are singing, dancing, producing, or if they are just enjoying it.”  DJ Salsa adds that the music he plays is unique, and something you can only hear on 95.5 the Heat, Phoenix Radio.

“The way that I mix the music and the special blends I create, that is my seal,” he said. “Through music you can fill the heart with joy bringing, happiness and positive vibes to everyone who listens to it. The music in all its expressions is a universal way to express our feelings and to release them at the same time, it is a great therapy for the soul. Music is the answer.”

Salsa now lives in Corn Hill with his wife of 21 years Karol and their 4 children.
DJ Salsa further encourages anyone who wants to do the type of work he does now to pursue their dreams.

“If you really love music, don’t give up, and fight,” he said. “Educate yourself and go for it. The most important thing is believing in yourself.”

Whether you’re in need of some therapy for the soul, a bit of happiness and joy, or some inspiration to launch your own career, be sure to check out DJ Salsa on Flava Factory and Sabato Ardiente (Saturday Heat), the DJ Salsa show. Flava Factory can be heard every Thursday from 8 p.m. until 10 p.m. and Friday from 5 p.m. until 7 p.m. Sabato Ardiente can be heard each Saturday from 7 p.m. until 11 p.m….exclusively on Phoenix Radio, 95.5 FM.