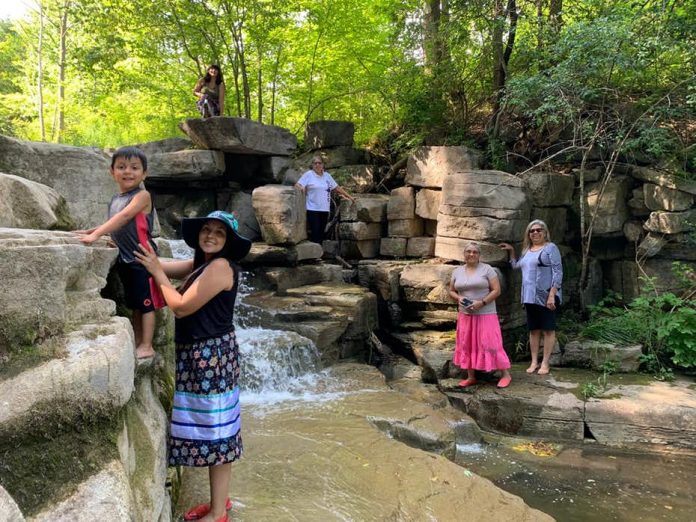 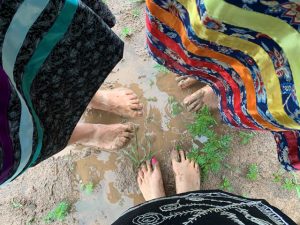 Oneida women from the three communities located in New York, Canada, and Wisconsin, announced receiving a gift of nearly 30 acres of land from a Quaker ally within their traditional homelands in Clinton, N.Y. Divided by centuries of the U.S. government’s removal and impacts of colonization, a younger generation of women accepted this gift through a non-profit organization they formed, called Akwéku Ohshʌ’he Yukwayóte̲, meaning, “We Work Together.”

aver, is Oneida turtle clan from Canada and also a director of Akwéku Ohshʌ’he Yukwayóte̲.

Commonly known as the Oneida people, their traditional name is, On^yota’aka, the People of the Standing Stone.

“After nearly 200 years of being separated, reuniting all Oneidas on our ancestral homelands was always the original intent of our land claims case,” said Diane Shenandoah, Oneida Wolf Clan Faithkeeper in New York.

“My grandmother traveled between our three communities gaining the support of our claims going before the U.S. Supreme Court in 1951. Witnessing these young women work together all these years later for the greater good of unifying our people’s heart, this is the happiest day. I know our ancestors are looking down on us and smiling,” she said.

The Oneidas lost their land base due to

illegal takings by New York State and land squatters. In the early 1800s most Oneidas were relocated to Wisconsin by the U.S. government and endured a treacherous journey across the Great Lakes in poorly built boats provided by the government.

Oneida lives were lost due to starvation, illness and sinking boats. A smaller group of Oneidas relocated to London, Ontario, and some families stayed behind on the homelands in New York, and even among the Onondaga Nation. The Oneida people remained geographically divided over the years and eventually became divided politically.

In 1985 the U.S. Supreme Court recognized the illegal takings of Oneida lands. In 2005 after a series of court cases, reversing its own decision, the court ruled against the Oneidas.

Bader Ginsberg wrote the court’s final opinion, citing the exploitative Doctrines of Discovery of 1493. She breathed life back into the Catholic Papal Bulls that gave Cristobal Colon (Columbus) and European explorers th

e right to claim lands inhabited by non-Christians, and to convert, enslave, rape, dispossess and kill the indigenous peoples living on their own lands. The Doctrine is valid U.S. law today and serves as the basis of all title to lands in the United States. The Court in the City of Sherrill v. Oneida Indian Nation in 2005 affirmed the now 196-year-old law establishing US supremacy over Indigenous peoples in Johnson v. M’Intosh 21 US (8 Wheat.) 543 (1823).

How did the Oneidas lose their la

nd? In part, through a series of deceptive land “grants” issued by NY Governor George Clinton (after whom the town of Clinton is named) in cahoots with US President George Washington. Despite the sacrifices of the Oneidas during the Revolution, Washington had no hesitation in conspiring to steal their territory. That “grant” area is where the 30 acres are located. When the Oneidas sought redress in the US Courts their claims were rejected in the 2005 ruling by a 9-0 vote with Supreme Justice Ruth Bader Ginsberg authoring the decision.

nale. In fact, the Jews were confined to ships which took them to northern Africa from the port of Palas at the same time as Cristobal Colon (aka Columbus) began his voyage west in August of 1492. The resources used by Queen Isabella and King Ferdinand to underwrite Colon’s expedition came from the stolen estates of the expelled Jews.

Also citing “latches,” the court stated that the Oneidas waited too long to bring their case. Yet, “Indian” land claims could not be heard in U.S. courts before 1948 when the Indian Claims Commission was established. The Oneida people never relinquished title to their homelands. Generations of paper trails and legal cases generated by the Oneidas shows land reacquisition has always been at the forefront.
Despite all that has kept them separated, Oneida women from the three communities met in the summer of 2018 in their homelands for unity, healing and to dream on the lands together.

“Our Oneida women found healing together under the solar eclipse of 2017,” said Michelle Shenandoah, Oneida wolf clan member in New York, and a director of Akwéku Ohshʌ’he Yukwayóte̲.

“Over 200 Haudenosaunee women gathered at Rekindling the Fire of Our Sisterhood to honor the role of our ancestral sister, Jigonsaseh. She played a critical role in carrying a message of peace to our people and informing our Haudenosaunee Confederacy. Our Confederacy is the oldest living democracy in the world and influenced the U.S. Constitution and the Women’s Suffrage movement. Colonization has led to external violence against us, and lateral violence among our own people — we are focused on healing this.”

“Now, we can celebrate and practice our culture on our own lands together, thanks to the gift of a generous soul, Liseli Haines, who wants to make things right,” said Shenandoah.

“I have lived on Oneida lands for 43 years and inherited this land from my mother,” said Liseli Haines. “When I heard Michelle talk about the Oneida women gathering on their homelands and their desire to have a place of their own, I knew this was the right thing to do.” said Haines. “My mother would be glad.”

“A farmer has organically farmed part of the lands, and a neighbor has hunted here for years. I was worried about what would happen to them, but the ladies let me know that they would work together with these individuals. They said, they know what it’s like to be thrown off the lands and not be able to use it again, and they wouldn’t do that to someone else,” said Haines.

Samantha Doxtator, Oneida wolf clan member from Canada and also a director of the non-profit, has always dreamed of returning home. “When I first learned about this gift coming our way, I could hardly believe it. The name, Akwéku Ohshʌ’he Yukwayóte̲, is perfect because it reminds us, this is how it will be – we work together,” she said.

Doxtator is a traditional member of the longhouse ways and granddaughter to a wolf clan mother in Canada. “We have always stayed connected to our homelands because this is where our spiritual umbilical cord is tied,” she said.
Portia Skenandore-Wheelock, wolf clan member of the Oneidas in Wisconsin, and a director said, “Unlike the typical hierarchical board, this organization follows our traditional matriarchal clan structure and decision-making processes.”

“The organization and the lands are held in the name of our women for the benefit of all Oneidas who wish to learn, practice and help our traditional Longhouse culture thrive. We get to show the world that our ways hold solutions for today’s problems,” said Skenandore-Wheelock.

Schuyler-Dreaver said, “We are instructed to act on behalf of seven generations into the future, so our great-great-grandchildren and their children can live a life as good as we have, or even better. My daughter will remind us of the voice of our young, and she’ll only have memories of unified Oneidas.”

When the Oneida women first met together on their homelands last summer, Otatdodah Homer, the Wolf Clan Mother in the On^yota’aka homelands said, “We promised. Not to let anybody come between us and discourage us ever again! We are finally together after all this time. It is something that hasn’t happened in almost two hundred years. We discussed this as Clan Mothers, as Faithkeepers, and as the leaders whom were present.”

These Oneida women hold a vision of being together, practicing their language, growing their own foods and strengthening their relationships among the nations of the Haudenosaunee Confederacy.

Schuyler-Dreaver said, “I can now see the future for our Oneida children clearly, that is, united with one heart and mind.” 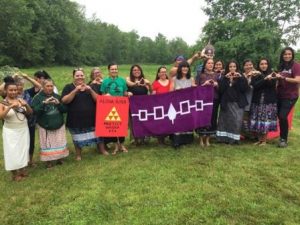