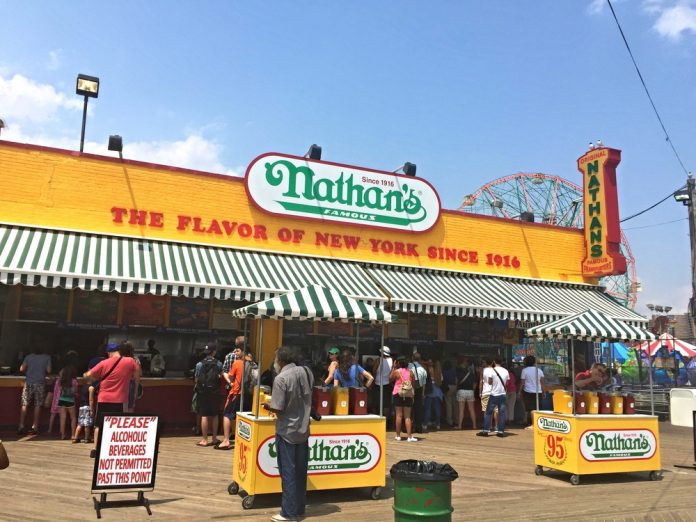 The hot dog is a classic American food. It is connected to Coney island, America’s most storied amusement resort. Nathan’s century old triumph of entrepreneurship is only part of the Ellis-Island- meets–Coney-Island story. The name “Coney Island hot dog” means one thing in New York and another in the Midwest and beyond. This is thanks to immigrants from both Northern and Eastern Europe.

Nathan Handwerker was a Polish immigrant. He had a day job as a restaurant delivery boy and a worked Sunday afternoons at Feltman’s German Gardens slicing rolls. According to Handwerker’s 1974 New York Times Obituary, Jimmy Durante and Eddie Cantor encouraged Handwerker to strike out from Feltman’s. They told him to sell hot dogs for a nickel instead of a dime.

Durante and Cantor worked as singing waiters on Coney Island before they found fame. In 1916 he did just that. He opened a small hot dog stand with his wife. The stand was at Surf and Stillwell, the Subway’s extension to Coney Island, which in  1920, brought countless New Yorkers to his stand. Society people and politicians, actors and sportsmen flocked to Nathan’s.

They brushed shoulders with truck drivers, laborers, and housewives. Franklin D. Roosevelt famously served Nathan’s hot dogs at a 1936 lawn party for Britain’s King George VI and his wife, Queen Elizabeth. They were the parents of the now-reigning Queen Elizabeth II. Coney Island hot dogs are hot dogs smothered in chili or ground beef. They also have mustard and onions on them.

The hot dog stand at the corner of Stillwell and Surf became a renowned  part of Coney Island. In the summer of 1916, according to one of the more famous tales about the working man’s lunch, Nathan’s held the first in what would become its annual Fourth of July hot-dog eating contests, a competition that pitted four immigrants against each other. The winner was that one who scarfed down the most hot dogs as a demonstration of his American-ness.

The competitors stand  on a raised platform behind a long table with drinks and Nathan’s famous hot dogs in buns. Most contestants have water on hand, but other kinds of drinks can and have been used. Condiments are allowed, but usually are not used. The hot dogs are allowed to cool slightly after grilling to prevent possible mouth burns. The contestant that consumes (and can keep down) the most hot dogs and buns in ten minutes is declared the winner.

The length of the contest has changed over the years, previously 12 minutes, and in some years, only three and a half minutes. Since 2008 the contest time has been ten minutes. Spectators watch and cheer the eaters on from close proximity. A designated scorekeeper is paired with each contestant, flipping number board, counting each hot dog consumed. Partially eaten hot dogs count and the granularity of measurement is eighths of a length. Hot dogs still in the mouth at the end of regulation count if they are subsequently swallowed. If  there is a tie, the contestants go to a 5-hot-dog-eat-off to see who can eat that many more quickly. Further ties will result in a sudden-death eat-off of eating one more hot dog in the fastest time.

The winner of the men’s competition is given possession of the coveted international “Bejeweled” mustard-yellow belt. The belt is one of “unknown age and value” and according to George Shea and rests in the country of its owner.    In 2011 Sonya Thomas won the inaugural women’s completion and its “Bejeweled” pink belt. Various other prized have been awarded over the years. For example, in 2004 Orbitz donated a travel package to the winner and starting in 2007, cash prizes have been awarded to the top finishers.

The Nathan’s hot dog eating contest has been held at the original location on Coney Island most years since about 1972, usually in conjunction with Independence Day. Nathan’s promoter, Mortimer Matz, claimed that on July 4, 1916 four immigrants held a hot dog eating contest at Nathan’s famous stand on Coney Island to settle an argument about who was  the most patriotic. He also made the spurious claim that the contest has been held each year since then except in 1941, as a protest to the war in Europe and in 1971 as a protest to political unrest in the United States.

As Coney Island is often linked with recreational activities of the summer season, several early contests were held on other holidays associated with summer besides Independence Day. Memorial Day contests were scheduled for 1972, 1975, and 1978, and a second 1973 event was held on Labor Day. The rise in popularity of the event coincided with the surge in popularity of the worldwide competitive eating contest circuit.

On July 4, 2011 Sonya Thomas became the champion of the first Nathan’s hot dog eating contest for women. Previously, women and men had competed against each other, except for one all-female Memorial Day competition held in 1975. Eating 40 hot dogs in 10 minutes, Thomas earned the inaugural Pepto-Bismol–sponsored pink belt and won $10,000.

The competition draws many spectators and worldwide press coverage. In 2007 an estimated 50,000 came out to witness the event. In 2004 a three-story-high ”hot dog eating wall of fame” was erected at the site of the annual contest.

The wall lists past winners, and has a digital clock which counts down the minutes until the next contest. Despite substantial damage suffered at Nathan’s due to Hurricane Sandy in October, 2012, the location was repaired, reopened, and the 2013 event was held as scheduled. ESPN has long enjoyed solid ratings from its broadcast of the hot dog eating contest on Independence Day and on July 1, 2014, the network announced it had extended its agreement with  major league eating and will broadcast the contest through 2024. The event continues to be recognized for its power as a marketing tool.

In 2003 ESPN aired the contest for the first time on a tape-delayed basis. Starting in 2004 ESPN began airing the contest live. Since 2005 Paul Page, has been ESPN’s play-by-play announcer for the event, accompanied by color commentator Richard Shea. In 2011 the women’s competition was carried live on ESPN 3 followed by the men’s competition on ESPN. In 2012 ESPN signed an extension to carry the event through 2017. In 2014 ESPN signed an agreement to carry the competition on its networks for 10 years until 2014. The event also enjoys great newspaper coverage.

Coney Island is on the southwestern tip of Brooklyn in New York City. The spot has been inhabited for several hundred years, but it became a resort area in the mid-19th century. A few decades later, Coney Island became the largest amusement park spot in the country. Today some of those original amusement park rides still exist!

Coney Island is not, in fact, an island. Although it originally was a island, today it is a peninsula following the shore being filled in during the beginning of the 20th Century. New York City law bans swimming without a life guard, but even with a grey sky or a frosty wind, a person can’t help but be taken in by the romance of the waves crashing on the beach.

The famous Coney Island amusement park rides stand still and silent during the winter, but there are so few people on the boardwalk and the beach that it’s easy to imagine you have it all to yourself. There’s always a chance you might find a seashell or the remnants of one along the beach. In any case, you’ll have the seagulls to keep you company!

Celebrating 100 years on Coney Island from 1916 to 2016, they’ll be selling hot dogs for 5 cents, the price of a Nathan’s hot dog when the stand was first opened a century back. Five cents is an important price in Nathan’s history, which starts with young Nathan’s Handwerker working at the original Coney Island Feltman’s. Charles Feltman hired young Nathan Handwerker at his sprawling Coney Island complex, where he sold a version of what is widely credited as one of the world’s first hot dogs for 10 cents.

Seeing an opportunity, Nathan left Feltman’s and opened his own Nathan’s hot dog stand down the street, borrowing $300 to do so . There he sold a hot dog of his wife’s creation. The recipe is still a secret. For 5 cents the shrewd business move was a success, obviously. It was Governor Nelson A. Rockefeller, who said, “No man can hope to be elected in this state without being photographed eating a hot dog at Nathan’s Famous,” a notion that persists to this day. In the 1940s Nathan Handwerker’s son, Murray, returned from World War II, and helped his parents open locations outside of Coney Island. By 1965 Nathan’s had operated 365 days per year, 24 hours a day.

In 1968 Murray Handwerker was named  president of Nathan’s. Under his guidance the humble hot dog stand founded by his father went public, resulting in the enormous hot dog empire that is Nathan’s today. Nathan Handwerker passed away in 1974 and his son died in 2011. Now I am on my way to the grocery store to shop for a package of Nathan’s hot dogs and buns. Winter is gone. Flowers are blooming. It is time to fire up the grill and enjoy a great hot dog treat!