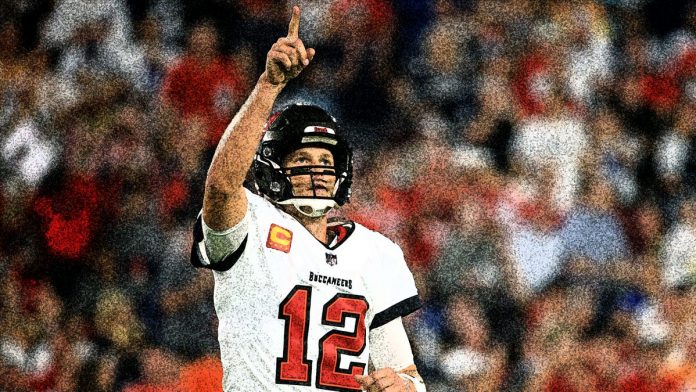 The reckoning is coming.Illustration: Getty Images

The Tom Brady resurgence is a fraud.

The notion that Brady, the Tampa Bay Buccaneers’ quarterback, could possibly have his best season ever at 44 is such a reach, a fairy tale.

So many want to push a false narrative about Brady that they won’t even look deeper at his gaudy numbers to get a real picture of what exactly Brady has been doing.

Take this season so far, Brady has excelled, but against shabby competition. In fact, that’s where he has fared the best since joining Tampa Bay from New England.

Brady has gotten fat on bad teams. In 2020, against teams that finished below .500, Brady had 26 TDs and just three interceptions. He completed passes at a 68 percent clip.

Against teams that finished .500 or better, Brady had just 14 touchdowns and a whopping nine picks. His completion rate dropped to 62.6 percent.

If you take out the Las Vegas Raiders and Chicago Bears (both finished 8-8 or exactly .500), Brady could only muster nine TDs and also had nine INTs. His completion rate fell to 60.5 percent.

It’s been the same pattern so far this season.

And before you say this pattern is common with all quarterbacks, it’s just not true. For comparison sake, Green Bay Packers’ QB Aaron Rodgers excelled against the best teams in the league. In 2020, against teams that finished .500 or better, A-Rodg had 18 touchdowns with four picks and a 68 percent completion rate.

It tells you that Rodgers did some of his best work against some of the elite teams in the league.

The same people who are ranting and raving about Brady’s numbers, pooh-poohed Rodgers’ four-TD performance against the Detroit Lions on Monday night.

In that case, they claimed it was no big deal, and that Rodgers should have destroyed the Lions. They don’t want to give Rodgers credit for taking candy from a baby.

The same should go for Brady. He has opened the season against two bad teams. The Atlanta Falcons were embarrassing a year ago and are in midseason form already this season. And Brady beat the Dallas Cowboys in the opener, another bad team that didn’t make the playoffs in 2020.

Against these two also-rans, Brady put up nine touchdowns and just two picks.

It has made some write and say Brady will win the MVP and is en route to his greatest season ever. Some Brady fanboys in the media have the Bucs going undefeated.

There’s a long way to go and Brady won’t have a free lunch the entire season. Eventually, Brady will have to face good teams and good defenses. It starts this Sunday when the Bucs play the Rams in Los Angeles.

This is where Brady could struggle, and become mortal.

There’s a reason Brady was snubbed by the Pro Bowl last season despite throwing 40 touchdowns. Instead, Rodgers, Seattle’s Russell Wilson and Arizona’s Kyler Murray were named NFC Pro Bowl QBs. The omission of Brady was just.

Truth be told, Brady was having just a so-so season until the final four games of the year. Brady had 12 touchdowns and one interceptions against three non-playoff teams. He played the Falcons twice in the final three games.

Before the feasting part of the schedule at the end, Brady had 28 touchdowns and 11 picks.

And in the previous two games before Brady’s stats got fat, he had five touchdowns and four picks in back-to-back losses against good teams, the Kansas City Chiefs and the Rams.

In the NFC Championship Game, Brady got lucky again. He threw three touchdowns, but also had three picks, completed only 56 percent of his passes and had a QB rating of 73.8.

You don’t believe Brady was lucky? It was the fourth time Brady threw three interceptions in a single-elimination setting. But his record in those games is 3-1. Every other quarterback with that dubious feat are a combined 20-123.

In the NFC playoffs, covering three games, Brady had seven touchdowns and three INTs and completed 55 percent of his passes.

Eventually, the dust will clear and Brady fanboys will see that his numbers are smeared.