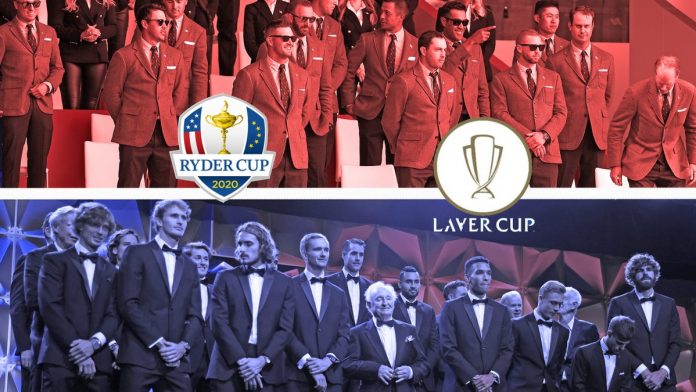 A little off the beaten path, especially at this time of year, but this weekend sees two international competitions on these shores. First up is the Ryder Cup, which is fun for non-golf fans as everyone can enjoy watching stuffy-ass golfers having their sphincter close up tighter than a snare drum when they’re playing for something other than someone else’s money.

It’s a rare phenomenon, almost exclusive to the Ryder Cup. Almost always, Team Europe is filled with guys you’ve barely heard of, and maybe one or two major champions, if that. You’d think the much more heralded U.S. team would wipe the floor with them. But almost without fail, you’ll find European players who can’t miss a putt within 50 yards when the going gets tough. They seem to revel in these challenges.

Well before he actually claimed the Masters, Sergio Garcia couldn’t be beaten in the Ryder Cup. It drove everyone nuts. Ian Poulter is basically an also-ran when it comes to the PGA Tour. But, in the Ryder Cup, he becomes the lovechild of Bobby Jones and Ares, caddied by Bagger Vance. He’s never been beaten in the singles portion of the competition in six tries.

Meanwhile, the U.S. team is filled with names you see around the top on major weekends. Feels like nothing should crack them. Most of these guys have taken big shots late on a Sunday with the biggest trophies in the sport on offer. This should be nothing different. And most years, you can find the U.S. crapping themselves all over the course. Jordan Spieth has lost all three of his singles runs in this. Dustin Johnson and the stiff breeze between his ears is 7-9-0 all time. And I think we’re all here to see Bryson DeChambeau faceplant again as he did in 2018 in France. Then again, he’s the kind of asshole who might come alive, you never know.

The U.S. has only won one of the last five Ryder Cups, and two of the last nine of these, even though they almost always boast higher-ranked players. Give these guys something genuine on the line, like in a team competition, and they can’t handle it. They can’t settle for whatever check comes their way. They either lose or they don’t, and it’s too much. Make them play for sponsor money, and it’s all fine. Meanwhile, Europe loves playing with the pressure of being teammates. Makes for riveting television.

At the same time, in Boston, the Laver Cup will be going on, tennis’ answer to the Ryder Cup, though it’s Team World vs. Team Europe. This edition, the fourth, will be the first that doesn’t have any of the big three of Roger Federer (whose baby this is), Rafa Nadal, or Novak Djokovic. It feels a bit gimmicky because it’s so new, but the players on both sides get really into it which feeds to the fans. There are some fun pairings in doubles, as Nadal and Federer have combined in the past, as have Djokovic and Federer. It’s the only tournament that generally gets Nick Kyrgios’ full attention, and when you watch him play in this it makes you wonder why he’s not a top-five player in the world. The 11-point tiebreaker, if it’s one set all, makes for a real urgency to play as well.

If you need a break from the usual, either of these events work as that.

The Dodgers had themselves a themed road trip. Apparently their social media guy didn’t quite have their finger in the wind:

Someone missing from this picture? Feels like there is. Can’t quite place it. Oh, right, The guy accused of sexual assault. We’d all like to pretend he doesn’t exist, but then again we aren’t the ones who handed him $40 million a year.

Did you need another dumbass tweet to start your day? Have I got one for you:

Yes, that’s what Texans fans should be livid about. They should really be punching their dashboards that some obscenely rich dude has to fork over his cash to Watson, and not the fact that Watson is being sued for allegedly sexually assaulting nearly two dozen women. Because what’s important is whether he can play football, and whether he’s getting paid or not.

We know who’s to blame for it. It’s Watson. He’s the one being sued. He’s the one under investigation. To shirk that aside is just about the most football thing ever, and to bemoan his payroll status. Football gonna football.