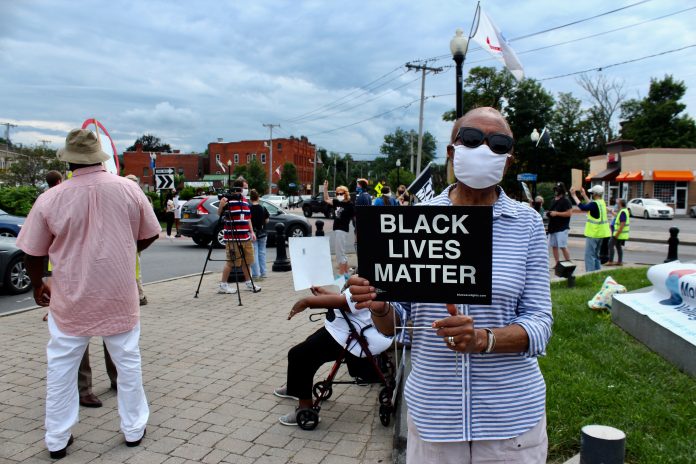 Story and Photos by Eamon Handzel 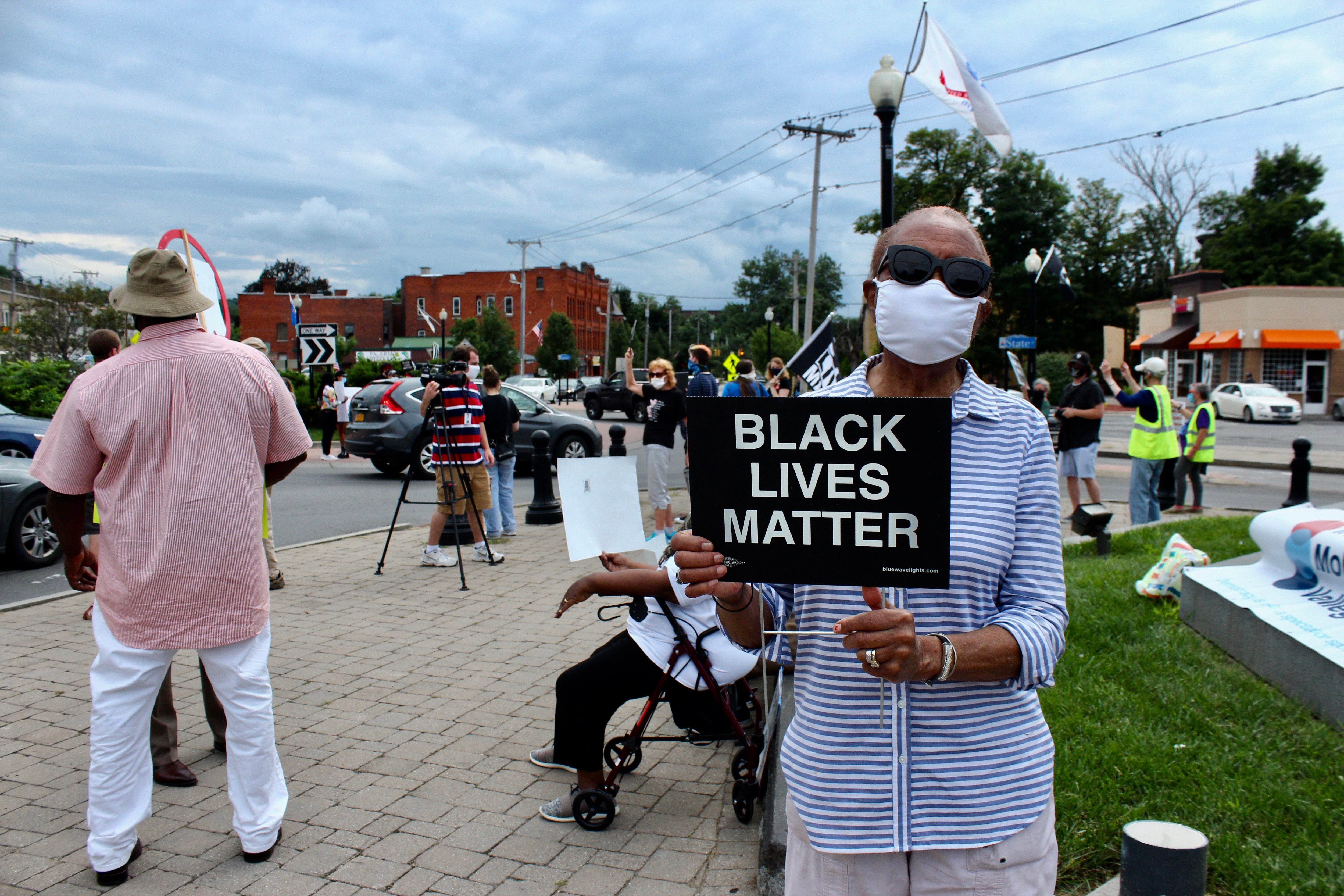 Utica, NY – On August 7th, Utica locals of all races and ethnicities rallied together at Oneida Square in the city center to show their solidarity with the Black Lives Matter movement. The event was titled the “Protect the People Rally”. The demographic was incredibly diverse. Old, Young, Black, White, Rich, and Poor alike spent the afternoon chanting their beliefs and announcing their frustration at a system they claim to be corrupt.

With any rally in a public center, you’re bound to have locals disagree with those protesting. The many protests/rallies at Oneida Square are no exception with many of the cars passing by shouting profanities in the name of the opposition. This rally saw little of that. The vast majority of cars honked in support. There was of course one Republican individual, who formerly ran for District Assembly, that stayed for the entirety of the event to offer mostly civil discourse to the activists.
One of the more iconic images from the event, though not captured on camera, was when a Utica Club truck passed by in the roundabout and honked in support of BLM with the driver smiling and raising his fist high. There is no better beer for this than Utica Club as it is the city’s beer. 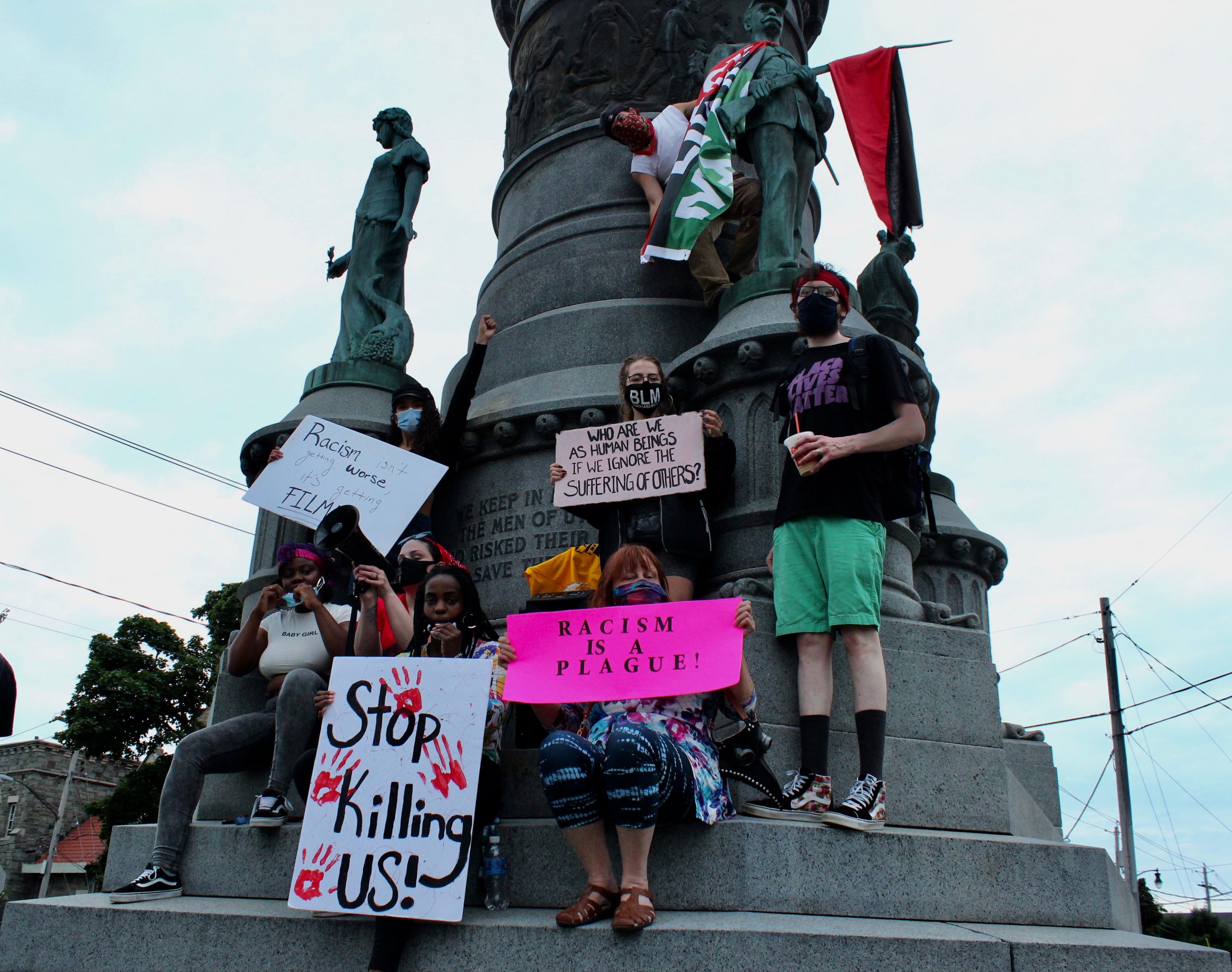 One group of young activists, known as the Utica Abolitionists (see above image), showed particular energy and commitment, with their leader eventually climbing the statue of the Square to hang a BLM flag on the statue itself.
The police, while present, showed restraint and held their position far away from the crowd. However, as the young activist climbed the statue, an officer approached the crowd to ask for the man to climb down. The man refused, and that was the end of the matter.
According to the Abolitionist’s website, their name implies the obvious: the abolition of Law Enforcement. However, this view is not shared by all members, with several of them only asking for a defunding of Law Enforcement. But which community will be the first to try this experiment? Who goes first?
Most of their suggestions towards defunding the Police seemed reasonable enough. They suggested taking money away from police only so far as to limit their responsibilities to more traditional means of immediate response to violent situations and that the withdrawn funds should go towards schools, mental health facilities, job placement programs, and any other programs that could prevent criminal behavior in the first place.
When asked, several former Officers have rebuked this idea as fantasy due to the aforementioned programs not being able to handle the extra work that police do themselves. One officer stated that Police often direct many people to various social programs anyway, so what’s the problem?
This issue, while complicated, does somewhat come down to police saying the system works, while BLM says it doesn’t and that it requires radical restructuring.
As always, the lingering question is, “what happens next?”. What methods will activists take to see their goals met? The Abolitionists and other local BLM activists have said they plan on holding many more rallies and will continue their work. Utica will just have to wait and see what is accomplished.