A Quiet Place – A Review 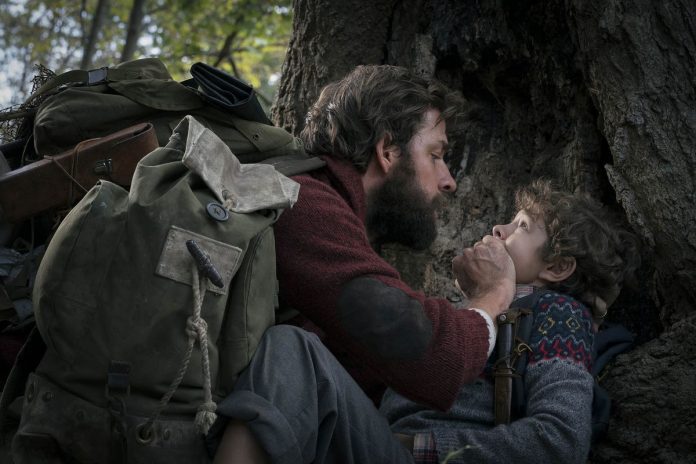 Playing our nerves and frequently our imaginations, horror movies, when done right, can set the tone. And if films like “Jaws” made us afraid to go in the water, “A Quiet Place,” John Krasinski’s latest film, will make you afraid to utter a sound. The film, produced with a budget of $7M, has already had an impressive Box Office return of $50M its first weekend. And, while not a genre buster, the movie takes a familiar concept of a creature feature and instills in it a sense of visual terror and, surprisingly, emotion. The film entertains smartly, and its biggest achievement is that it lets you feel its protagonists’ bond amidst the terror.
The film is complex, yet the plot is confined to a simple narrative. The Abbott family live in a post-apocalyptic world that is stalked by aliens that can’t see, but who hunt with superhuman hearing. Make a sound and you die. This simple but elemental concept is solidified in the first 10 minutes of the film in a scene (which won’t be spoiled here) that shows just how dangerous making a sound really is. The Abbott’s live in perpetual silence on their farm: mother and father (John Krasinski, Emily Blunt), and two children, played by Noel Jupe and Millicent Edmonds. The dynamic between the family, as between silence and sound, is further helped by the wonderful job Edmonds brings to the role, especially given that Edmonds plays a deaf child while also being deaf in real life.

Krasinski is quick to set up this world. The family doesn’t wear shoes and walks barefoot to mitigate noise. Children play monopoly with pieces their mother has sewn out of yarn. Their father paves the way from their house into town in white sand to reduce noisy footsteps and paints sections of their wooden floor so as to remember what boards creak. The sound design in the film is pristine, setting up the extreme care the family must take to avoid making a sound at all costs. This is helped in many ways, such as dinners that take place in silence, an almost total absence of dialogue (the family mostly talks in sign language), and shots were taken from the daughter’s point of view where we, as her, can hear nothing at all.

I could talk about the film’s creatures, which are exquisite in their creation. But it’s unnecessary. This isn’t a film of anticipation, where the monsters are revealed in the third act as a surprise. They are shown, frequently and up close. The horror is not their reveal, nor their menace, but the horror of what making a sound may bring. Noise is the real enemy here. 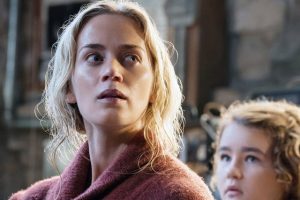 There’s no better example of this than one of only two spoken scenes in the film between Krasinski and Jupe. They speak greedily, hungrily. We understand what a precious gift it is to be able to speak a few sentences without fear of death. But wisely Krasinski doesn’t waste the opportunity. The scene is used to effectively set up a later scene – and an emotional experience – I wasn’t at all expecting from a horror movie. Its power stays with you until the end.

The performances are a wonder. Krasinski is able to imbue his protection and love towards his family with only expressions and gestures. And while humorous on “The Office,” there’s no trace of comedy here. He takes a serious role and runs with it.

Behind him, Blunt, a terrific actress, harnesses all her character’s emotions and brings them to life. A scene of her trying to stay quiet through incredible pain is empowering and gut-wrenching. Jupe is splendid and has nice scenes with Krasinski, Blunt, and Edmonds. And speaking of Edmonds, she simply owns her character in a way rare for young actors. A scene as she angrily struggles to accept her deafness and her father’s overprotectiveness, facial acting and signing her only tools, adds to the film in unforgettable ways.

“A Quiet Place” is unique horror. It will rack your nerves, test your limits – and don’t be surprised if you find yourself afraid to make a sound during it. You care about the family, about what happens to them, and the film makes you an active participant in its soundless environment. And underneath the fear and tension is a message about family bonds and protecting your own – wrapped up in an ending that is one of the best in recent horror.
The bottom line: for an emotional and nerve-wracking ride you won’t soon forget, “A Quiet Place” is a tough sell to beat.