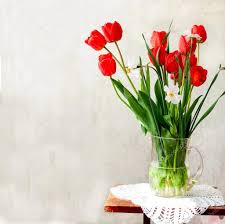 May is usually a pleasant month with cool temperatures, not usually hot or cold. The high temperature is typically 65-75°F. Temperatures are usually 40-50°F in the early morning, though frost may occur perhaps three or four times during the month. The record low May temperature for Utica is 23°F, and snow is rare, perhaps once a decade. Evening daylight extends to past 8 p.m. by May Day, and past 8:30 p.m. by Memorial Day.

May is usually a pleasant month with cool temperatures, not usually hot or cold. The high temperature is typically 65-75°F. Temperatures are usually 40-50°F in the early morning, though frost may occur perhaps three or four times during the month. The record low May temperature for Utica is 23°F, and snow is rare, perhaps once a decade. Evening daylight extends to past 8 p.m. by May Day, and past 8:30 p.m. by Memorial Day. Spring flowers add color to the home garden. During May, the landscape is transformed from mostly brown and gray to full leafed green of deciduous trees and shrubs.

The first of the month is May Day, a cross-quarter day midway between the vernal equinox of March 20 and the summer solstice of June 21. Also called Beltaine, this marked the beginning of summer in the Celtic calendar. With milder weather and longer daylight hours, outdoor activities increase. These include golf and gardening, bicycling, tennis, running, and the first outdoor barbecues and picnics of the year. Tulip blooms of red, orange, yellow and white flowers begin the month, with Iris later in the month.  Purple and pink lilacs add color and fragrance. Softball sized peony blooms of white, red, and yellow are in full flower by the end of the month. Most common vegetables can be planted by early May. Memorial Day weekend is the time to plant tomatoes, peppers, corn, and beans and mowing the lawn becomes a nearly weekly activity.

May Holidays and Observances
May 1 May Day; Law Day; International Labor Day May 2Rhode Island Independence Day May 5 Cinco de MayoMay 6 Rogation Sunday May 8 Truman Day – MissouriMay 10 Confederate Memorial Day – North & South Carolina; Ascension Day  May 13 Mother’s Day – Second Sunday May 15 Law Enforcement Day; Ramadan (begins at sundown) May 19 Victoria Day in Canada; Armed Forces Day – Third Saturday May 20 Mecklenburg Day – North Carolina; Whitsunday / Pentecost May 22 National Maritime DayMay 29 Trinity Sunday  May 28 Memorial Day – Last MondayMemorial Day Weekend The General Clinton Canoe Regatta on the Susquehanna River from Cooperstown to BainbridgeMother’s Day is on the second Sunday. It is traditional to send a card and flowers to mothers far away or take her out to eat at a restaurant if she lives close by.

Memorial Day is a major national holiday of the year. May 30 was originally known as Decoration Day. It began after the American Civil War as a day to honor war dead by placing flowers at the graves of soldiers killed during that war. This later became formalized as Memorial Day, honoring all war dead, observed on the last Monday of the month since the 1970s.

Memorial Day is the kick-off to the summer season, and many communities have a large parade. It is often the first trip of the year to beaches at nearby lakes for a picnic or weekend camping trip. Others prefer backyard picnics and barbecues. State parks and commercial attractions such as Sylvan Beach on Oneida Lake and the Enchanted Forest and Water Safari in Old Forge open for the season. After a snowy winter that lingered well into late April, this year the warmer weather of May as summer fast approaches will be especially welcome. It is time to get out and enjoy the milder weather and colorful flowers of May in the Mohawk Valley.

Jupiter is visible most of the night all month, rising before 9 p.m. On the 8th to 9th, it is the brightest it will be all year, being in opposition to the Sun. Venus is visible at its highest level all year as an evening star, setting by 11 p.m. The Moon has several conjunctions with planets this month, the first, between Mars and Saturn on the 5th. Venus is to the right of the waxing crescent Moon on May 17. Jupiter, the brightest “star” in the night sky, is in conjunction with the waxing Gibbous (nearly full) Moon on the 27th.