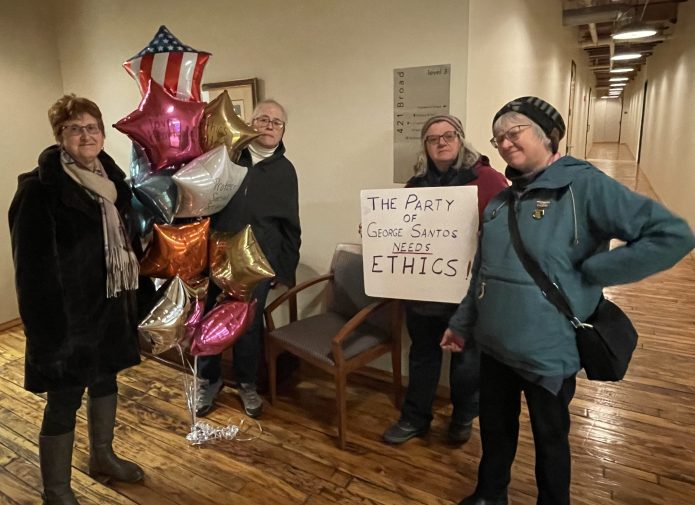 Utica, NY: On January 9th, 2023, 7 members of Indivisible Mohawk Valley brought a large balloon bouquet as a welcome gift to Congressman Williams’ Utica office with their list of demands from him now that he was sworn into Congress.

Each balloon had a written message on it reflecting how the local residents wanted him to vote on upcoming bills. You can find all the photos and videos in this Google file. Some examples of messages on the balloons include:

However, the group couldn’t find his office listed on his website, despite taking the elevator to each floor, politely asking businesses in the building if they knew where the Congressman’s office was and hearing no over and over.

“We want him to vote no on a House rules package if it includes gutting the Office of Congressional Ethics. This is his first vote as the new member of Congress for NY22,” said one participant.

“I’m here to express how important it is to support public education as a retired teacher. The freedom to learn is absolutely vital as is supporting our teachers,” said Kathy Wojciechowski from Oneida Castle.

Now that the House has confirmed a Speaker, the next order of business is voting on the rules package, which is a normal procedure. What’s abnormal is all the concessions that Speaker McCarthy made to members of the House Freedom Caucus. This includes gutting the Office of Congressional Ethics, a bipartisan committee that investigates ethics violations. The House Republicans tried doing this same thing in 2017, but ultimately public pressure changed the minds of Speaker Paul Ryan and Whip Kevin McCarthy.

Diminishing the Office would have a devastating effect on accountability on members of Congress and abuses of power. It is this same Office that would investigate identity thief and newly elected Republican Congressman George Santos from NY03 who lied to constituents about his resume and identity, and is under criminal investigation at multiple levels.

Congressman Brandon Williams has a choice to show all of us in NY22 his true colors. He can be the political outsider he campaigned on and vote no on a rules package that includes strangling the OCE, or he will be a McCarthy man, rubberstamping what he wants instead of what central New Yorkers have asked him to do on their behalf. His Director of Constituent Services, former Assemblyman John Salka, affirmed to the group that he would relay their positions and take a picture of the balloon bouquet and send it to Congressman Williams.