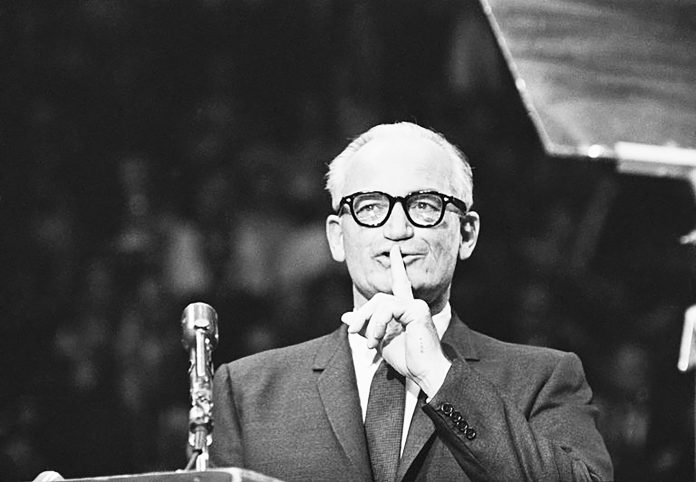 Barry Goldwater served five terms in the United States Senate representing Arizona and was the 1964 Republican candidate for President of the United States. He was the author of the conscience of a conservative (1960).  He is widely recognized as the founder of the modern conservative movement in America.

During the Second World War, Goldwater served as a pilot in the United States Army Air Force in the Asiatic Theater from August, 1941 to November, 1945, flying chiefly between the United States and India, as well as crossing the Himalayas to deliver supplies to China. He joined the Air Force Reserve after the war and founded the Arizona air National Guard, which he desegregated two years earlier than the rest of the United States military.

In 1967 he retired with the rank of Major General, having flown 165 types of aircraft.  After the war, Goldwater served from 1948 to 1950 on an Indian affairs advisory committee for the Department of the Interior. In 1949 he won a seat of the Phoenix City Council, launching his career in public service.  Three years later, in 1958, he won his first of two consecutive terms in the United States Senate, where he gained national prominence as a speaker for conservative causes.  He supported numerous pieces of civil rights legislation.  In 1964 he won the Republican nomination for the presidency.  He was defeated by incumbent Lyndon B. Johnson, but Arizonans returned him to the senate in the 1968, 1974, and 1980; he chose not to seek re-election in 1986.

Goldwater was born in Phoenix, in what was then the Arizona Territory, on January 2, 1909.  His father’s family had founded Goldwater’s, a leading upscale department store in Phoenix.

Goldwater’s paternal grandfather, Michel Goldwasser, a Polish Jew, was born in 1821 in Konin, Poland, where he immigrated to London following the Revolution of 1848.  Soon after arriving in London, he anglicized his name from Goldwasser to Goldwater.  His father was Jewish, and his mother was Episcopalian Goldwater’s parents were married in an Episcopal church in Phoenix.

For his entire life, Goldwater was an Episcopalian.  Barry Goldwater attended the Phoenix public schools, Staunton Military Academy, and one year at the University of Arizona at Tucson in 1928.He began a business career in 1929 in family mercantile.

When the Japanese attacked Pearl Harbor on December 7, 1941, Goldwater was a Reserve First Lieutenant in the United States Army Air Force. He became a pilot assigned to the ferry command, a newly formed unit that flew aircraft and supplies to war zones worldwide.  He was given a slot in the air transport command.  Promoted to captain, he was stationed in the China-Burma-India Theater, where he ferried aircraft over the Himalayan Mountains, through some of the most treacherous weather and terrain in the world.

He spent most of the war flying between the United States and India via the Azores  and North Africa or South America, Nigeria, and Central Africa.  He also flew “The Hump” over the Himalayas to deliver supplies to the Republic of China. Following World War II, Goldwater was a leading proponent of creating the United States Air Force Academy and later served on the Academy’s Board of Visitors.  The Visitor Center at the Academy is now named in his honor.  As a colonel, he also founded the Arizona National Guard, which he would desegregate two years before the rest of the United States military.

Goldwater was instrumental in pushing the Pentagon to support desegregation of the armed services.  Remaining in the Arizona Air National Guard and Air Force Reserve after the war, he eventually retired as a command pilot with the rank of major general. As an Air Force Reserve Major General, he continued piloting aircraft, to include the B-52 stratofortress.

In a heavily Democratic state, Goldwater became a conservative Republican and a friend of Herbert Hoover.  He was outspoken against the New Deal Liberalism, especially if close ties to labor unions he considered corrupt.

A pilot, active amateur radio operator, outdoorsman, and photographer, he criss-crossed Arizona and developed a deep interest in both the natural land the human history of the state.  He entered Phoenix politics in 1949, when he was elected to the city council as part of a nonpartisan team of candidates pledged to clean up widespread prostitution and gambling.  The team won every mayoral and council election for the next two decades.

Goldwater rebuilt the weak Republican party and was instrumental in electing Howard Pyle as governor in 1950. Soon Goldwater was tackling bigger political challenges.  In 1952 he defeated the popular incumbent Senator Earnest McFarland, who happened to be the senate’s Democratic majority leader.  As senator, Goldwater proposed a new-some said radical-political agenda.  “He preached the cause of modern conservatism”, wrote one biographer, which emphasized “individualism, the sanctity of private property…anticommunism, and the dangers of centralized power.”

Before long, the freshman senator moved into the ranks of leadership, becoming a chair of the Republican campaign committee in 1955.

The Conscience of a Conservative

With the publication in 1960, of the “The Conscience of a Conservative”, Barry Goldwater became the leader of a new national movement.  Written with speechwriter Brent Bozell, the book was a statement of Goldwater’s political creed.  In chapters that focused on issues such as civil rights, labor relations, and the welfare state, Goldwater called for the “utmost vigilance and care…to keep political power within its proper bounds.”

The national media largely dismissed the book, but Goldwater’s vision quickly gained an audience and the book became a best-seller.  Today, it is considered a landmark in the development of modern conservatism.

His First Term in the Senate

During this time the Saturday Evening Post described Goldwater as “aggressive, articulate, colorful”’ and having “more leadership potential” than any other republican in the past decade.  Goldwater became an outspoken critic of organized labor and its corrupt bosses like the teamster, Jimmy Hoffa. He declared his opposition to the concentration of power in any hands, whether of government, business, or labor.

He constantly defended the independent entrepreneur and the small businessman, warning that “any government big enough to give you everything you want is big enough to take away everything you have.”  Goldwater was keeping his oath to “support and defend the constitution.” For the conservative, he says, there is no difficulty in “indentifying the day’s overriding political challenges is to preserve and extend freedom”.

The Republican Nomination for President in 1964

Goldwater’s nomination split the Republican ranks between moderates and conservatives.  “Extremism in the defense of liberty is no vice,” Goldwater famously proclaimed in his acceptance speech, hoping to quell dissent.  “Moderation in the pursuit of justice is no virtue.”  Such comments bolstered his followers, but also aided the Democrats who backed Lyndon Johnson.  They portrayed Goldwater as a dangerous extremist in a barrage of campaign speeches and television ads that evoked images of nuclear war.”  The whole campaign was run on fear of me,” Goldwater later recalled.

On November3, 1964, President Lyndon B. Johnson was reelected by the largest popular vote margin in  United States’ history, crushing his conservative opponent, Republican Barry Goldwater. Johnson received 61 percent of the vote, topping the previous record set by Franklin D. Roosevelt, and carried 44 states for a total of 486 electoral votes.

The election also produced the biggest Democratic majority in the House of Representatives since 1936.  The New York Times summed up that “Barry Goldwater not only lost the presidential election, but the conservative cause as well.”  At the time most political analysts agreed with these declarations.  Two years later, the GOP, led by Goldwater—inspired conservatives, made a remarkable comeback, gaining 47 seats in the House, four seats in the Senate, and eight governorships.  Just 16 years after the Goldwater debacle, Republican Ronald Reagan, running as an unapologetic conservative, won the first of two landslide presidential elections. As columnist George Will put it, Barry Goldwater lost 44 states, but won the future.

Successes in the Senate

Goldwater was easily reelected to the United States Senate in 1968 while the President who buried him  in an historic landslide dared not seek reelection.  During his 30 years in the senate (from 1952-1965 and then 1969-1986), Goldwater consistently voted to limit government, except when it came to the military, quoting the constitution that the federal government was responsible for the “common defense” and insisting that peace was best kept through military strength.

Despite his presidential defeat, Goldwater’s leadership helped to fuel conservative victories in the years ahead, particularly in 1980. Goldwater returned to the senate in 1969 and served another 18 years, chairing the Armed Services Committee and the Select Committee on Intelligence and becoming one of America’s respected elder statesmen.

Including the Presidential Medal of Freedom in 1986 and the Langley Gold Medal from the Smithsonian Institution in 1987, buildings and monuments named for him include The Visitor Center at the United States Air Force Academy in Colorado Springs and a terminal at Phoenix Sky Harbor International Airport.  In 1986 Congress established The Barry M. Goldwater Scholarship and Excellence in Education Program to assist college sophomores and juniors studying science, mathematics and engineering.

Barry Goldwater, conservative and individualist, dies at the age of 89 in Paradise Valley, Arizona.  He was in the early stages of Alzheimer’s Disease.  Mr. Goldwater, who retired from the senate in 1986, as one of America’s respected statesmen.  He retired from the senate in 1987 and was succeeded by John McCain, who praised his predecessor as the man who transformed the Republican Party to modern times.