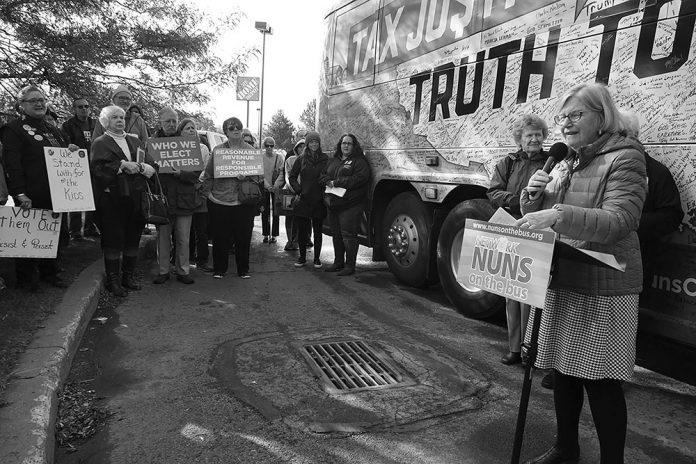 For two long, excruciating years Republicans have controlled both Houses of Congress as well as the Presidency and voted over and over again against the best interests of ordinary  Americans.

They have done everything they can to carry out the agenda of their billionaire donors who want to enact policies that hurt the middle class and help only the wealthy.   Senate Majority Leader Mitch McConnell even recently suggested cutting Social Security and Medicare to curb the mounting deficit brought on by their $1.5 trillion tax scam.  Economists are predicting that a recession is coming which will result in big cuts to programs that benefit children, elderly, and disabled.

There’s only one way to ensure that McConnell never has opportunity to carry out his dishonest and dangerous plan to rob seniors and the disabled of their hard earned Social Security and Medicare benefits: We’ve got to end GOP control of Congress.

To help do just that, the race for the 22nd Congressional District is vitally important.  Citizen Action and the Working Families Party are proud to endorse Anthony Brindisi for Congress.  The latest poll shows a very tight race where every vote will matter.   We have worked with Anthony for years to help get enacted legislation benefitting working families.

He has great integrity, listens to his constituents, and is not afraid to stand up to special interests.  Anthony will fight to protect Social Security and Medicare, defend our health care programs, work to improve our schools, ensure a fair tax system, protect the rights of people of color and women, and revitalize the Upstate New York economy.

We are urging everyone to vote your values on the Working Families Party line – Row E on your ballot.  Your vote on the WFP line sends a powerful message that you’re voting for justice and fairness for the people of our area.

NUNS ON THE BUS COMES TO UTICA

The Nuns on the Bus Tour stopped in Utica at the office of Rep. Claudia Tenney (NY-22) on  October 23rd. Ahead of the midterm elections, the Nuns on the Bus are traveling across the country to educate the public about the deceitfully-named “Tax Cuts and Jobs Act of 2017,” including congressional districts where the incumbent voted in support of the Republican tax law.  The Nuns on the Bus Tax Justice Truth Tour launched in Los Angeles on October 8 and ends outside Mar-a-Lago with a “Fiesta for the Common Good” on November 2.

The Republican Tax Law will hurt

ordinary New Yorkers in these ways:

• 842,800 New Yorkers will lose access to affordable healthcare as a result of the law undermining the Affordable Care Act.

• 8,595,900 New York residents enrolled in Medicare or Medicaid face threats to their coverage from the $1.9 trillion added to the federal deficit over the next ten years.

President Trump promised that employers would use their tax cuts to give workers a raise.  More than six months after the law passed, workers are still waiting. Just 4% of the national workforce has received bonuses or pay raises, while most of the benefit from corporate tax cuts is going to wealthy CEOs and shareholders through stock buybacks

“Last year, Nuns on the Bus stayed in Washington to keep relentless congressional attacks on the common good at bay, but this year we’re going on the road to hold members accountable for their votes,” said Sister Simone Campbell, SSS, executive director of NETWORK Lobby for Catholic Social Justice, which launched the first Nuns on the Bus tour during the 2012 presidential campaign. “Instead of investing in our shared future and ensuring that everyone contributes their fair share towards the common good, Congressional Republicans enacted a tax law that is disastrous for workers, middle-class families, small businesses, and our economy.”

Sr. Simone told the crowd of about 75 that we need tax justice to support 100% of the country and not the 1% and corporations. The Nuns on the Bus Tax Justice Truth Tour includes 30 Catholic Sisters attending 54 events in 21 states over the course of 27 days on a tour that began October 8. Citizen Action was one of the local sponsors of the Nuns on the Bus tour.

Citizen Action of New York is a statewide grassroots organization fighting for social, racial and economic justice. Join the movement for justice by becoming a member and a volunteer.   To support our work, please come to our Central New York Chapter fundraiser on December 2 at 4 p.m. at our offices at 40 Faxton Street.  For more information on our activities, please check our Facebook page at Central New York Citizen Action, call 315.725.0974, or email cnycitizenaction@gmail.com.