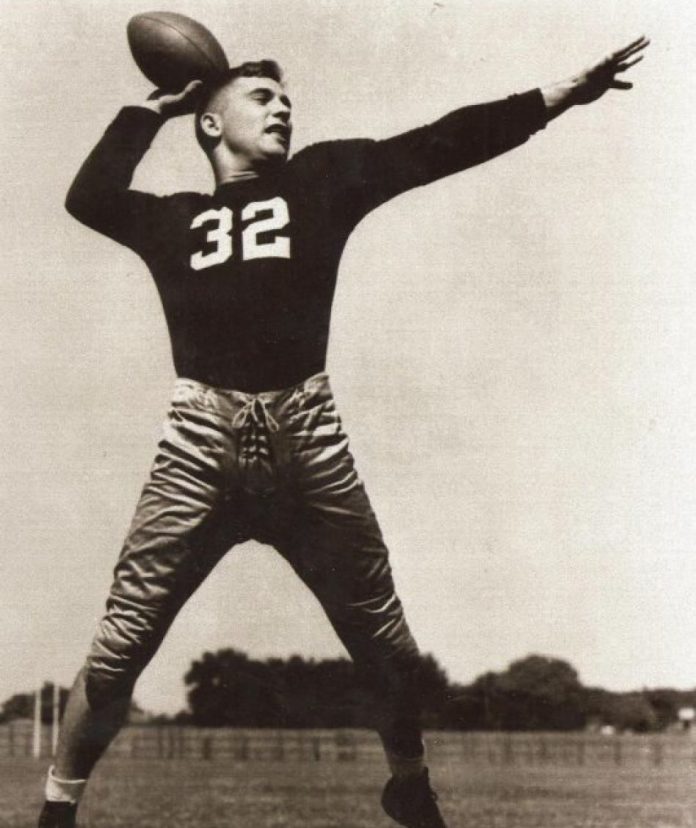 Background
He played college football for the University of Notre Dame, and professionally, for the Chicago Bears. Lujack was the first of several successful quarterbacks who hailed from Western Pennsylvania. Others include pro football Hall of Fame members Johnny Unitas, Joe Namath, Dan Marino, Jim Kelly, Joe Montana, and George Blanda. Lujack was a former American football quarterback and 1947 Heisman Trophy winner.

Early Life
John Christopher Lujack, Jr. was born on January 4, 1925, to Alice and John Sr., in Connellsville, Pennsylvania, the youngest of four sons and fifth child in a family of six children. The family is of Polish descent. His father, John, Sr., worked for the Pittsburgh and Lake Erie Railroad for thirty years as a boiler-maker. Lujack was on the Connellsville High School football team from 1939 to 1941 and was also senior class president and valedictorian. He lettered in four sports: Baseball, Football, Basketball, and Track in high school. His 1941 team, named The Cokers for workers in the coal milling industry who fed the ovens went 8-0-1 but did not get to play for the league championship, because their last game with Brownsville ended in a 13-13 tie. The people in Connellsville had wanted him to go to the United States Military Academy (Army) at West Point, going so far as to ask their local congressman for an appointment. He was the first Connellsville High School student to receive an appointment to West Point, but Lujack, a fan of Notre Dame, listened to their football radio broadcasts, had his heart set on playing in South Bend. Lujack attended Notre Dame, where he was given a scholarship by Frank Leahy, from 1940 to 1943 and then 1946 to 1947. His career was interrupted for two years by World War II, after his sophomore season, where he served as an officer in the United States Navy. His time in the Navy was spent hunting German submarines in the English Channel as an ensign. When he returned from the Atlantic duty, he appeared on the cover of the September 29, 1947, issue of Life magazine. He led the 1947 Fighting Irish to a 9-0 record in his senior year, where he completed 61 passes on 109 attempts for 777 yards and also ran 139 yards on 12 carries and won the Heisman trophy. As he had in high school, he once again received varsity letters (called “monograms”) in four sports—baseball, football, basketball, and track, while at Notre Dame, becoming the third person to do so. He was a two-time unanimous all American (1946 and 1947). In addition to winning the Heisman, he was named Associated Press Athlete of the Year.

Professional Football Career
Lujack was paid $17,000 for his 1948 rookie season with the Bears and $20,000 for his fourth and final season. In his rookie season, he played defensive back where he had 8 interceptions for 131 yards and kicked 44 out of 46 extra points. In the summer of 1949, he starred in a radio program on ABC,

The Adventures of Johnny Lujack, which was a summertime replacement for The Jack Armstrong, The All-American Boy Show. It was a 30-minute program and broadcast on Monday, Wednesday, and Friday. The show was broadcast from the studios of WGN in Chicago over the Mutual Broadcasting System (MBS) and ran for 13 weeks. In the final game of the 1949 season, the 9-3 Bears defeated their
Hometown rivals, The Chicago Cardinals (6-5-1), by a score of 52-21 on December 11. In that game, Lujack threw six touchdown passes and set an NFL record with 468 passing yards. The record was broken later by Norm Van Brokin. Sid Luckman and George Blanda played behind Lujack in the rotation at quarterback for the 1949 and 1950 seasons. During the 1950 season, Lujack set an NFL record with 11 rushing touchdowns by a quarterback. His record was tied by Tobin Rote with the Green Bay Packers in 1956, and broken by the New England Patriot’s Steve Grogan in 1976. Lujack, named to the 1950 All-Pro First Team, also set a Bears’ record for 109 total points in a season with 11 touchdowns, 3 (out of 5) field goals, and 34 (out of 35) extra points. That record was surpassed by Gale Sayers in 1965 with 123 total points. Johnny Lujack married Patricia Ann “Pat” Schierbrock in Davenport, Iowa at the Sacred Heart Cathedral on June 26, 1949. They have three children—Mary, Jeff, and Carol.

Lujack won the Heisman Trophy in 1947
“As you look back now, you say “Boy, that’s something,” Lujack stated. “In 1947, I was the 13th Heisman winner. It really didn’t have the publicity and the hoopla that you have going on today. I was told after the Southern Cal game in 1947 that I won the Heisman Trophy and was really very surprised because I wasn’t after any individual stuff. Now it really means an awful lot when somebody says John was an All-American at Notre Dame and that doesn’t grab them, but then if they add– he was a Heisman Trophy winner, it grabs their attention”. Johnny Lujack was a no. 1 draft choice of The Chicago Bears, and in four busy seasons, he twice was All-Pro–once on defense and then on offense. Lujack was elected to the National Football Foundation Hall of Fame in 1960 and remained close to the Notre Dame scene.

Returned to Notre Dame
After four years with the Bears, he returned to Notre Dame as an assistant coach for 1952 and 1953 to repay Frank Leahy as a debt of gratitude for having given him a scholarship to Notre Dame. Leahy wanted Lujack to succeed him as the head coach of the Fighting Irish, but Terry Brennan was chosen instead by Reverend Theodore Hesburgh, the university president. In 1954 he then started in the car dealership business with his father-in-law, at Lujack -Schierbrock Chevrolet Company of Davenport, Iowa. He sold his dealership interest to his son-in-law in 1988. Lujack served as a television commentator for several years, teaming with Chris Schenkel to call New York Giants games on CBS from 1958 to 1961. However, in 1962 when the Ford Motor Company signed on as a major sponsor and learned that Lujack was a Chevrolet dealer, he was replaced by Pat Summerall. He also worked with Jim McKay on CBS dong college football and on ABC college football telecasts in the late 1906s. On June 8, 1978, Lujack was inducted into the National Polish-American Sports Hall of Fame. In2005 he donated $50,000 to Connellsville High School toward a new field house for the football stadium. It was later named Johnny Lujack Field House. The Johnny Lujack Training Facility was formally dedicated in 2009. He was also inducted into the inaugural class of the Fayette County Sports Hall of Fame.

The Oldest Heisman Trophy Winner
Johnny Lujack is still flinging it, right here in Southern California, out and about in the sandy playground of Indian Wells, where he lives happily and heartily, as he always has, with his wife of 68 years, the lovely Pat. He is nearly 91 and his best years might still be in front of him. He is the nation’s oldest living

Facebook
Twitter
Previous articleDoula Digest-Push It. Push It Good!
Next articleThe Twisted Reason Why We Have the Electoral College