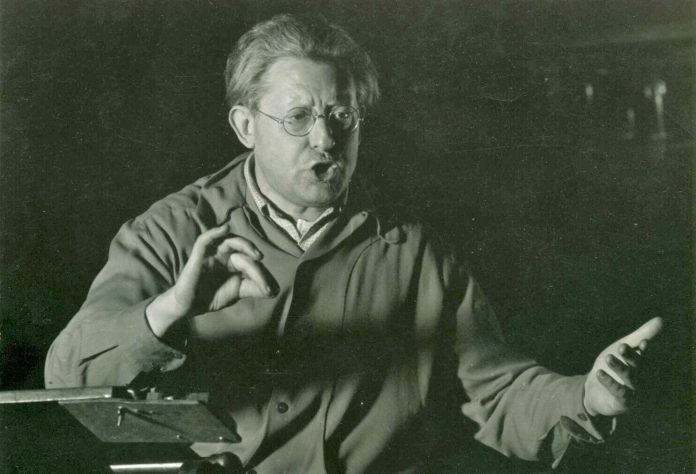 Rodzinski was born in Split, Kingdom of Dalmatia, Austria-Hungary, now in Croatia. Soon afterward his father of Polish descent and a general in the Army of the Habsburg Empire, returned with his family to Lwow, Poland, where Artur studied music.  He later studied law in Vienna, where he simultaneously enrolled at the Academy of Music. His teachers there included Josef Marx and Franz Schreker (composition), Franz Schalk (conducting), and Emil von Sauer and Jerzy Laleicz (piano).

Rodzinski was wounded in action during World War I; after his discharge, he accepted a chorus master position at the opera in that city, making his debut as a conductor in 1920 with Verdi’s Ernani.

The following year saw him conducting the Warsaw Philharmonic Orchestra at the Warsaw Opera. While visiting Poland, Leopold Stokowski heard Rodzinski leading a performance of Wagner’s “Die Meistersinger von Nurnberg” and exclaimed, ”I have found that rare thing, a born conductor!” and invited him to conduct the Philadelphia Orchestra.

At the Los Angeles and Cleveland

Between 1925 and 1929, Rodzinski served as Stokowski’s assistant, conducted for the Philadelphia Grand Opera, and directed the opera and orchestral departments at the Curtis Institute of Music. From 1929 to 1933, Rodzinski was the music director of the Los Angeles Philharmonic. He was named the second music director of the Cleveland Orchestra in 1933, following the departure of Nikolai Sololoff.

A demanding conductor, Rodzinski propelled the orchestra forward.  He would frequently endear himself to the public by conducting without a musical score or baton.  One of his main contributions to Cleveland’s music scene was integrating opera into the Cleveland Orchestra’s repertoire. In addition, Rodzinski sought to feature more contemporary music in orchestra performances, including Claude Debussy, Maurice Ravel, Alban Berg, Dmitri Shostakovich, Jerome Kern, and the first Cleveland performances of Stravinsky’s “Le Sacre du Printemps” (“The Rite of Spring”).

In his quest to perform the U.S. premiere,  Rodzinski was forced  to compete with his mentor at the Philadelphia Orchestra, Leopold Stokowski. Although Rodzinski worried about  the Cleveland audience’s reception for the provocative opera, the orchestra’s performances proved a success.  Shostakovich himself had an abiding faith in the Rodzinski-led performance.

“When you see the Cleveland Orchestra’s presentation of the American premiere of my opera in Severance Hall the last day of January, you will see no traditional opera. I have repudiated all old forms of opera,” Rodzinski said.

One of the most famous recordings made by the orchestra during Rodzinski’s tenure was a performance of  Kern’s 1937   musical “Show Boat.” Arranged by the composer himself as Showboat Scenario for Orchestra, the piece was recorded by the orchestra in 1941 and conducted by Rodzinski 38 times over a three-year period.

Among the more memorable moments of Rodzinski’s career, he was on the podium as a guest conductor with the New York Philharmonic on December 7, 1941, when the Japanese attacked Pearl Harbor. Although Rodzinski declined to announce the news, the concert was being broadcast live on the radio and he led the philharmonic in a performance of the Star-Spangled Banner. Later he noted that the demands of World War II on young men should inspire orchestras to take the unprecedented step of adding women to their ranks.

In Rodinzski’s view, women would make “an excellent addition to any first class symphony orchestra.” Between December, 1939 and February, 1942 Rodzinski and the Cleveland Orchestra made an extensive series of recordings for Columbia Records. He also appeared with the New York Philharmonic  in 1934 and 1937, receiving positive reviews for his concert performance of Richard Strauss’ “Elecktra.”

In addition  Rodzinski was active across Europe, becoming the first naturalized American citizen to conduct the Vienna Philharmonic at the Salzburg Festival in 1936 and 1937. At Arturo Toscanini’s recommendation, Rodzinski was asked by NBC to select musicians for the new NBC Symphony Orchestra, guided some of its first recordings (issued on the budget label World’s Greatest Music with neither conductor nor orchestra identified.), and led its concerts before Toscanini’s  arrival. This engagement inspired Rodzinski to depart Cleveland and New York, where he became music director and conductor of the New York Philharmonic beginning with the 1943, 1944 season.

Rodzinski was appointed Music Director of the New York Philharmonic in 1943. Although his four year tenure  was marked by struggles with Arthur Judson, the manager of the orchestra, Rodzinski achieved high standards of performance.

During Rodzinski’s, time, the renowned music critic and composer, Virgil Thomson wrote about Rodzinski’s tenure at the Philharmonic:

“We now have an orchestra that is great to hear. We owe it to our great Artur Rodzonski conductor.”

During Rodzinski’s time on the podium, the philharmonic recorded  extensively again for Columbia, performed weekly live broadcasts on  CBS radio and appeared in the feature film, “Carnegie Hall.”

However, despite the quality of the orchestra’s performances, numerous artistic matters arose, such as the prerogative grounds of contention. Not willing to compromise on these matters, Rodzinski resigned in 1947. His reputation as a conductor was so prominent at this time that his resignation was the subject of a cover story in Time Magazine on February, 1942.

The Chicago Symphony Orchestra had been wooing Rodzinski for some time, and now he decided to accept the leadership of that orchestra immediately, starting with the 1947, 1948 season.  Here again, an inability to work with the board resulted in his swift departure after only one season. His short tenure still had a significant impact upon the orchestra and local audiences through performances such as an account of Wagner’s Tristan and Isolde with Kirsten Flagstsad.

After his departure from Chicago, Rodzinski’s health began to deteriorate.  There was little recording activity available to him in the U.S., and so he settled in Europe once more.

Here his status as a major musician was recognized, and he was invited to lead significant productions, such as the 1953 first performance of Prokofiev’s “War and Peace” at the Maggio Musicale in Florence Italy as well as traditional repertoire works.  He conducted at La Scala and worked extensively for Italian Radio, conducting well-received readings of Wagner’s “Tannhauser” and Tristan and Mussorgsky’s “Boris Godunov” and “Khovanshchina.”

He reestablished his presence as a recording artist through a contract with Westminster Records for whom he recorded extensively with the Royal Philharmonic Orchestra of London from 1955.

His final recordings were Ernani in 1958.  By this time, the  state of Rodzinski’s health had become fragile.  He was warned by his Italian doctor that further conducting activity would put his life at risk.  However, he returned to Chicago in 1958 to conduct “Tristan” once again.  This time with the Chicago Lyric Opera and soprano Birgit Nilson, his return was a triumph, but these were his last performances and he died shortly afterward.

Rodzinski was married twice and had two sons.  In 1917 he married the concert pianist Madame Ilse and in 1918 they had a son, Witold, who became an historian, majoring in the study of China and its culture and a diplomat.  In 1934 while living in Cleveland, he married Halina Lilpop Wieniawski (1905-1983), who was from a well-known Warsaw family. They had a son named Richard.  He served as artistic administrator at the San Francisco Opera and Metropolitan Opera companies in the 1960s and 1970s.

Rodzinski recently retired from his position as president of the Van Cliburn Foundation, and in 2009 became general director of the International Tchaikovsky Competition. In 1976 Halina Rodzinski wrote the autobiography of their two lives, still the most extensively published account of Rodzinski’s life and career.