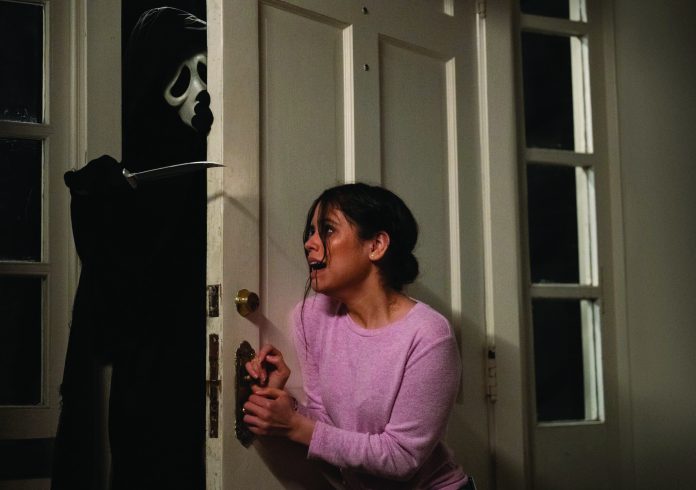 In 1996, the slasher/horror genre was revitalized with Wes Craven’s blockbuster “Scream.” The film featured hot young stars of the era. It also introduced the iconic Ghostface killer, who joined Jason, Freddy, and Michael Myers in the horror hall of fame. I saw the movie with friends at the Sangertown Mall, and it remains amidst my Top 100 favorite films.

25 years later, Ghostface is back in a new “Scream” movie.

We can start with what I liked, since the list will be short. As a fan of the original, I did thoroughly enjoy the callbacks and Easter Eggs to a movie that defined the greatest decade there ever was. There are cordless phones with loud ringers. Several stars reprising previous roles. A quick scene of a character watching the “Dawson’s Creek” Halloween episode. There’s even a guy named Wes.

They also do a great job of including current technology in an effective way. Scenes with automatic door locks and cellular tracking are some of the better parts the story has to offer.

It was great to see stars of the original film; Neve Campbell, Courtney Cox, and David Arquette return. They pick up the characters they left decades ago and make the transition with ease. Maybe it’s the nostalgia junkie in me, but I actually pumped my fist in celebration when Sidney (Campbell) makes her first appearance. If we loved “Scream” then we loved these people, and bringing them back was nothing less than a requirement.

The rest of the ensemble is made up of younger stars—most of which a guy who remembers watching “Scream” in a mall theater won’t recognize. Melissa Barrera, Kyle Gallner, Mason Gooding, Mikey Madison. They’re all fine. No one stands out but, given the nature of the movie, that’s understandable. I did recognize Dylan Minnette from “Don’t Breathe” and “13 Reasons Why” and find him to be very good. Jack Quaid, son of Dennis and Marley Shelton, is also featured.

“Scream” is overly meta. Not only do characters call back to previous (“Stab”) movies, much of the scenes and dialogue are directly ripped from the original. In a way similar to “The Force Awakens” it’s as if we’re starting the series from scratch. In true “Scream” fashion, the knife kills are bloody but the mood is light. There are funny characters and moments. Don’t watch expecting to be scared.

Where this rendition bombs is the depth and backstories of the characters. We can accept the motives of Billy Loomis in the original. Here it’s a who-dun-it you’ll never guess because it’s a total mess. I won’t spoil anything, but the spider web connecting the new characters to the old ones is nothing shy of ridiculous. And the ultimate motives for the revealed Ghostface this go round are nonsensical. It’s literally the same predictable and obvious jump scare repeated over and over and over.

As of today, we’re 254 days from October 1st. I was hoping “Scream” would be a fun movie to see in the theater. A way to reminisce about the past. Instead, it’s a reminder that there shouldn’t be attempts to replicate perfection.