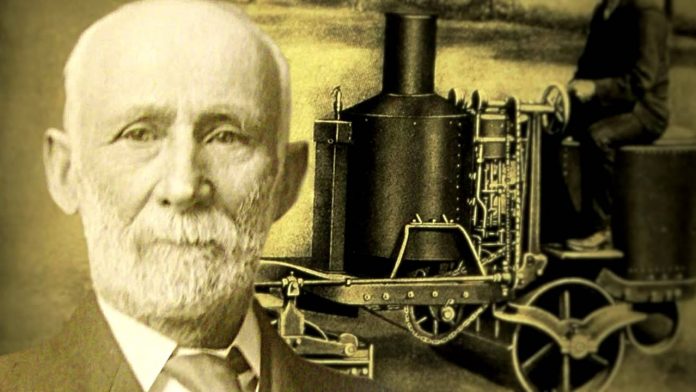 The invention of a small electric motor is often referred to as the Great Leap forward for plug-powered domestic machinery.  The new motor, known as the fractional horsepower motor, revolutionized the appliance industry and made possible the invention of many power assisted appliances, including the blender.  Chester Beach and Frederick Osius, and Louis Hamilton, a marketer, invented a small motor that ran on either AC or DC electrical power.

The first Hamilton Beach product, an electric hand-help massager, was produced in 1910.  That same year the Hamilton Beach Manufacturing Co. was founded for the purpose of developing more motor-driven appliances.  In 1922 the Stevens Electric Co. owner, Stephen Poplawski, born in Poland in 1885 and died in Racine, Wisconsin in 1956, invented the blender.  He was the first person to put spinning blades at the bottom of a container.

The blenders were sold to drug store soda fountains to make Horlick’s malted milk shakes.  In 1923 the Stevens Electric Company introduced the first liquefier blender. In 1932 Poplawski received a patent for a machine that would reduce fruits and vegetables to a liquid.  Blenders can be found in most kitchens in America.  They have become an indispensible way to process food and drinks.

In 1919 Polish born Stephen J. Poplawski of Racine, Wisconsin began the design and manufacture of beverage mixers of various types, under contract to the Arnold Electric Company of Racine at the time. The blenders were manufactured to be used in the preparation of malted milks. Racine was the location of the Holick Corporation, which made the malted milk drink to be served at soda fountains.  Poplawski joined the Greene Manufacturing Company, also located in Racine in 1932.

Greene began production of mixers of Poplawski’s latest design.  It was also in this year a new use for fruits and vegetables, so as to reduce them to a liquid state, was devised.  Mixers should not be confused with blenders.  Blenders contain sharp blades and typically operate at higher speeds that chop, liquefy, or otherwise break down larger food items.  A mixer is a much slower device without blades.

The Innovation of a Blender

Blenders are  the one innovation that we use in our day to day process. Blenders are commonly used in restaurants, laboratories and in houses.  The innovation of blenders are really helpful for kitchen activities.  Blenders are used to mix, puree, or emulsify food and other substances.  A blender consists of a jar with rotating metal blades and is powered by an electric motor.

History of the First Blender

The first blender used a plug-powered electric motor which is attached to the bottom of a jar. When the plug was connected to an electric source, the motor starts to rotate and blend the food products.  At first the motor was not  powerful enough to blend solid items.  Now a days there are different types of blenders for different purposes.

Blenders are used both in home and in commercial kitchens for various purposes.  Blenders also have a variety of applications in microbiology and food science.  In addition to standard food-type blenders, there is a variety of other configurations of blenders for laboratories.

History of the Waring blender

Fred Waring, a one-time Penn State Architectural and Engineering student, was always fascinated by gadgets.  He first achieved fame fronting the big band, Fred Waring and the Pennsylvanians, but the blender made Waring a household lame.

Fred Waring was the financial source and marketing force that thrust the Waring blender into the marketplace, however, Fred Osius invented and patented the famous blending machine in 1933. Fred Osius knew that Fred Waring had a fondness for new inventions, and Osius needed money to make improvements to his blender.  Talking his way into Fred Warng’s dressing room following a live radio broadcast in New York’s Vanderbilt Theatre, Osius pitched his idea and received a promise from Waring to back further research.

After spending $25,000 , the blender still suffered technical difficulties.  Waring dumped Fred Osius and had the blender redesigned once again.  In 1937 the Waring-owned miracle mixer-blender was introduced to the public at the National Restaurant Show in Chicago retailing for $29.75. In 1938 Fred Waring renamed his miracle mixer corporation The Waring Corporation, and the mixer’s name changed to the Waring Blender.

Fred Waring went on a one-man marketing campaign that began with hotels and restaurants he visited while touring with his band, and later spread to upscale stores such as Bloomingdale’s  and B. Altman’s.  Waring once touted the blender to a St. Louis reported saying, “…this mixer is going to revolutionize American drinks.”

And it did!  The Waring  blender became an important tool in hospitals for the implementation of specific diets, as well as a vital scientific research device.  Dr. Jonas Salk used it while developing the vaccine for polio.  In 1954 the millionth Waring blender was sold,     and it is still as popular today.  The “Waring Blender” was one of the earliest commercially successful blenders.  The most unusual thing about it is that it is named after orchestra leader Fred Waring.  Frederick Osuis worked on improving inventor Poplawski’s blender, and went to Waring for financial backing.  Waring backed its development, in part, so he could puree raw vegetables for the ulcer diet his doctors prescribed.

The Blender Is Still a Standard Fixture

In the 1960s Vita-Mix released a line of powerful blenders that , in addition to grinding, mixing, and blending, could make ice cream, cook soup, and make juice. This made blenders significantly more versatile and increased their popularity even more.

The traditional blender is still a standard fixture in many kitchens, but there are many new modern variations.  Some are minor and more in name than function, such as a “smoothies” blender or “margarita” blender (a standard blender can do these just as well).

Other types of blenders, such as immersion blenders have a completely different design.  Immersion blenders are hand held mixers with a small blender blade on the bottom and instead of pouring the material need to mix in a blender jar, the immersion mixer is placed in the substance needed to be mixed. Although blenders have had essentially the same function throughout the years, the design has changed over time as styles  changed.

Some of the most elegantly designs to grace kitchens were produced in the late 1940s through the 1960s.  It is the blender, the humble liquefier that spends most of its time awaiting call-up on the kitchen counter.  This year, perhaps, the best-known blender of all, The Waring, marks 75 years of pureeing, slicing, and making history.  But Waring was intrigued by the device.  The reason for the instant attractions was not only his ulcer, it was the secret behind the blender’s evergreen appeal, says Waring spokeswoman, Mary Rodgers.

One specially designed Waring Blender, the aseptic dispersal blender eventually would find fame in a very special location—the laboratory of Jonas Salk.  In 1953 the scientist used that blender for preparing cultures to develop a vaccine that would prevent polio.  This legendary medical breakthrough, the Salk Vaccine, would save millions from death and paralysis around the world.  The blender saw changes over the decades.  In the 1960s Waring introduced the first blender with space-age push buttons, and at the turn of the 21st Century, the company  began offering models with a tachometer that confirms blending speed.  Today the blender just keeps on mixin’.  According to a home world business industry census, 18.4 million blenders were sold in 2011  alone, and chefs continue to find new uses for the little appliance.  Hand-held immersion (or Wand) blenders continue to grow in popularity for larger batches (like soup, which can be pureed right in the pot) and with less clean up.

Blender fans continue to pay tribute to the happy sound of the blender and the comfort it is promised for decades. Says Rodgers: “Anyone who hears it knows that something delicious is on the way!”