Broadway Utica
HomeAnnouncement“The Other Side of the Mountains” Exhibition by Stephen T. Fletcher
AnnouncementEntertainment

“The Other Side of the Mountains” Exhibition by Stephen T. Fletcher 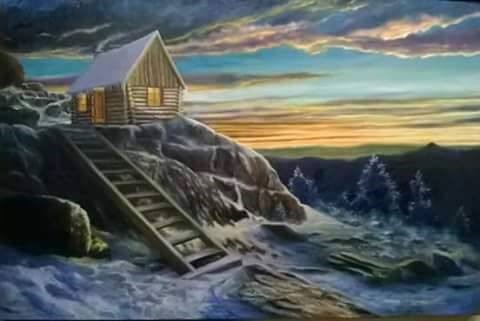 The Pratt House Featured Artists Series will Host “The Other Side of the Mountains” Exhibition by Stephen T. Fletcher in Boonville

Dodge Pratt Northam Art and Community Center in Boonville, is proud to present the work of Stephen T. Fletcher as its April featured artists. The exhibition, entitled “The Other Side of the Mountains” will be marked with an Opening Reception on April 6th from 7 to 9 pm. The regular hours of the exhibit will be 10 to 4 pm on Tuesdays through Fridays. Saturdays, by request only.

Born in 1967 in Utica, New York, Stephen T. Fletcher is a notable force in this generations Adirondack art scene. Fletcher started painting in oils at a very young age with the influence if his mother who was a hobby artist. He studied Commercial Art, Advertising, and Design and later attended Munson Williams Proctor Institute for fine arts. At Munson Williams Proctor he learned technique and color theory. He ran an open studio helping others with color theory and painting. After attending taught classes for six years he went on to explore independent studies.

Fletcher delved deep into design, color, and theory of such artists as Rembrandt, Hopper, Frederick Church, Thomas Cole, Salvador Dali and much more, subsequently refining his own visual and conceptual vocabulary of style, contrast, color, and a sense of place and time. “It seems as long as I have been involved in the arts, I have been chasing the mysteries of light and shadow. Light has always intrigued me in the way it lands, bends and reflects on water, objects, animals and people. In my paintings, I incorporate mood as well as a sense of place and time in contrasting shapes, colors, light and shadow. Ever since I was young, I have had a fascination with the Adirondack Region and its’ inhabitants. Therefore, many of my works involve the many subjects within. In each piece, I like to tell a tale in which the viewer can develop their own story. I work within my moods. My paintings may reflect my political views, regional assumptions, religion or anything that peaks my imagination. I like to reflect the sad, heartfelt, sarcastic, tragic, disturbing and sometimes humorous life and times in the mountains. I sincerely hope that in viewing my work, each person can bring away with them a feeling and mental image of a tale that affected them in some way.”

Fletcher’s work can be found in a myriad of public places and private art collections both in the United States and abroad and has been seen in numerous exhibitions. He currently lives and creates paintings in Forestport, New York.

“The Center seeks to develop and strengthen creative skills, build self-esteem, develop a sense of self-importance and individuality, encourage self-expression and stimulate imagination through the arts.

Our goal is to raise generations that value the power, the passion and the significance of community, its history, and the arts”.