The Black Panther- A Review 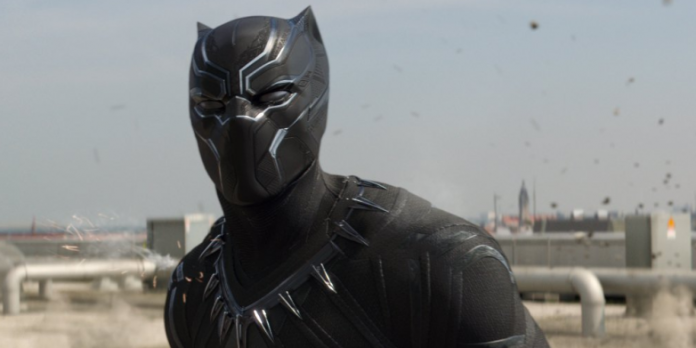 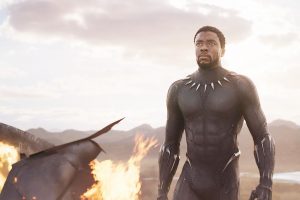 Just in time to set the stage for the May 2018 release of “Avengers: Infinity War” comes the long-awaited “Black Panther,” Marvel’s comic book adaptation of King T’Chaka/Black Panther, a hidden, technologically advanced, beautiful, and all Black country called Wakanda, and a film which smartly provides a war cry for the sake of humanity and harmony in a time period that day-by-day seems to lack both.

“Black Panther” is, cinematically, an experience as action-laden as “The Avengers” or “Captain America: The Winter Soldier,” and story-wise as intelligent and in-depth as any of the “X-Men” series (though the film lacks the dolor and superhero bending genre extreme of James Magnold’s 2017 wonder “Logan”).

“Black Panther,” like “Spider-Man” (2002) or “Captain America: The First Avenger” (2011) is an origin story. As such, there is a good amount of time spent building the backstory of T’Challa (Chadwick Boseman) – first as a young man dubbed the “Black Panther” for special skills that allow him ultimate’s in espionage and death-defying feats (such as jumping from his sleek, black, helicopter-like vehicle and assaulting a motorcade entourage with a fistful of EMP bombs, as well as donning futuristic suits that have the unique ability of remembering where T’Challa is struck and are capable of often fighting back for him). And later, of course, as his father, T’Chaka (John Kani), the current King of Wakanda, is killed in a tragic bombing, and his son must take his place. 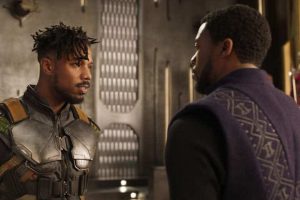 Of course, the suit – as many of the wonders of Wakanda – is powered by an extraordinary (albeit fictitious) metal ‘vibranium,’ which is able to accomplish marvels from powering the city’s high-speed train, as well as having the capability to heal bullet wounds in the span of a day. Certain aspects of “Black Panther” channel the high-tech gadgetry of films such as Marvel’s Daredevil or D.C. Comic’s Batman. There’s even quasi-homage to the illustrious gadget maker “Q” from the James Bond series in the character of Shuri, played energetically by Letetia Wright.

As with any superhero movie, there is of course a struggle against evil, and with “Black Panther” comes in the form of first a zealous terrorist named Ulysses Claue, played by Andy Serkis, and later by a brash, dangerous, fearless young man named Erik Killmonger, played in a solid supporting act by “Creed” alum Michael B. Jordan.

These elements – particularly Jordan’s character – are worked into the script (penned by Ryan Coogler and Joe Robert Cole) in a very “X-Men”-eques way, with struggles akin to the Civil Rights movement of the ‘60s with clear parallels to the varying methodologies of Martin Luther King Jr. and Malcolm X – as we’ve already seen Marvel illustrate well between Professor Xavier and Eric “Magneto” Lenshner throughout the “X-Men” films.
And while this theme runs through dealings between the Black Panther and Killmonger (spread over decades, with Stan Lee at the helm, Marvel Comics would mirror many important issues of the day, from fear of nuclear war to fighting Nazism, to civil rights causes), I feel it is important to state that while “Black Panther” makes important strides for racial equality in movies, this is not a racial film. It is a human one, a political one, and an inspirational one; led by Boseman and an impressive supporting cast, it makes its message known, stark and unadulterated. This is no more evident than its apropos and perfect ending that effectively tackles many points of dissension in our society and provides a hopeful yet positive answer.

The acting in the film is top notch. Boseman provides a believable character, both as a superhero whose true calling doesn’t become apparent until much later in the film, and as a new king balancing the mantle of his thrown with his people’s needs. Against him, Jordan provides a true antihero in Killmonger – not quite evil, albeit misguided – and their battles together are taut, believable, and, rightly, made of serious material.

The film boasts a host of other supporting characters, from the venerable Forest Whitaker, the aforementioned Serkis, Martin Freeman, (who plays CIA agent Everett K. Ross), to Daniel Kaluuya (from 2017’s “Get Out”), and Lupita Nyong’o, who won an Oscar for ‘Best Actress in a Supporting Role’ for her performance in Steve McQueen’s excellent “12 Years a Slave.”

Nyong’o, in particular, becomes the beating heart of this movie – a heartbeat advocating a break from tradition and urging the people of Wakanda to address the growing crises of less developed nations. Nyong’o is only one of many powerful female characters in this film, another break from tradition that Hollywood has seen of late with this, and films like last year’s “Star Wars: The Last Jedi” and Marvel’s “Wonder Woman.”

“Black Panther” is, at the end of the day, a spectacularly well-done film that somehow combines scriptwriting, action, superhero fandom, and a powerful moral tale into a film that slips effortlessly into the Marvel universe. Its acting is purposive, its action and fight sequences, not mere entertainment but a cinematic narrative, by the film’s climax, are as powerful as any depiction of rising against massive odds/reclaiming your values scenes in many prior movies outside of the superhero universe.
That “Black Panther” combines its politics and action with seamless finesse may be its ultimate crowning achievement.

*FYI: If you’re eager for the release of “Avengers: Infinity War,” do yourself a favor and sit through the ending credits. You won’t be disappointed.