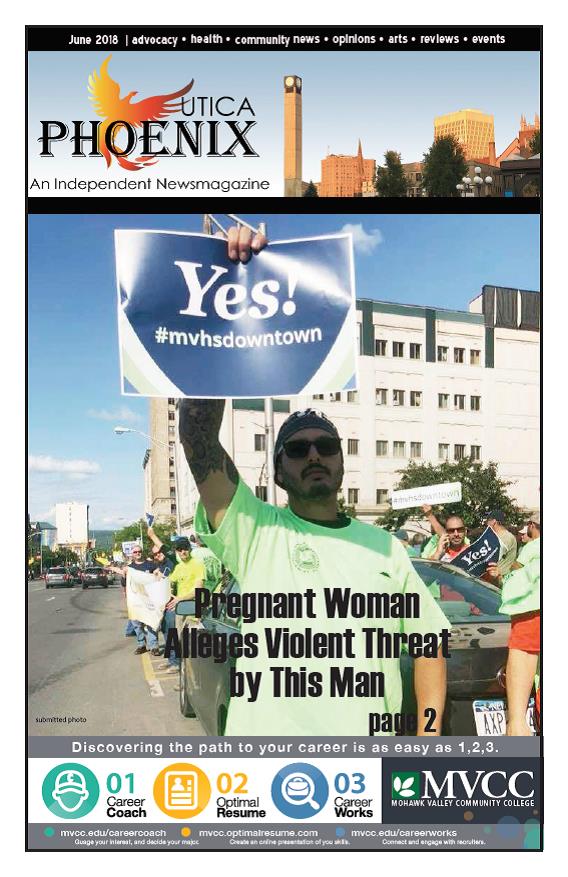 The Utica Phoenix has been made aware of a disturbing incident which allegedly occurred at the June 7th rally in front of the State Office Building. It involved the unidentified Union worker, pictured on the front page, allegedly threatening physical violence against a 7 month pregnant 5’3” woman holding a “Build it At St. Luke’s” sign by saying, “Push her out in the road and let her get ran over,” The unnamed victim wrote down the threat, snapped a photo of the protester and moved away from him.

After the incident, the woman posted his photo and details on Facebook. Denials and threats began with the implicit warning that the power of the Union would come down upon her and her business if it was not removed. She did so out of fear.

It was only after the Phoenix made contact with Pat Costello, President of Central NY Labor Council and Assistant Business Manager of the IBEW Electrical Union and the District

Attorney’s office that this response was made. “After the lady pushed her way to the street to get in front of the Tradesmen she was told be careful so you do not get hit by a car. That is what I was told happened. As far as her being nervous about any retaliation I can tell you that she has nothing worry about.:”

Since then the woman has made a complaint to the District Attorney’s office and sends this to the Phoenix as her official statement.

“This guy was holding up his sign and screaming at cars to honk, I was on the left of this man holding up my “Build it at St. Luke’s” sign and that’s when he said, “Push her out in the road and let her get ran over,” and laughed.
This man was not concerned about me getting hit by a car as they are trying to say. I know that because:
1. I clearly heard him say “push”
2. He was laughing afterward
3. I was standing directly side by side with him – if he was actually concerned about me getting hit, by that logic he would have said something along the lines of “everyone here is too close to the road, why don’t we all back up” – if we were all standing in the same exact spot, why would I be the only one at risk with the traffic? How they’re trying to twist it doesn’t make sense.

After he said that I asked him, “Did you really just say that?” And he laughed and wouldn’t respond to me in the typical bullying manner. That’s when I wrote down what he said, took his photo, then I walked down to the other side with calmer people and shot the breeze with another Union guy up front and we talked about Camaros.

My husband stayed in that spot (where I was originally next to the guy), but while I was on the other side the guy started getting rowdy and aggressive, crowding my husband and trying to make his sign show better than my husband’s “Build it at St. Luke’s” sign — my husband said “Please respect my space. Do not touch me.” This same guy said “I won’t touch you, but I’ll push you out into the road.” and once again laughed.

The guy said it more than once and in two different circumstances. I was just extra shocked he said it to me (which is why I posted) because I’m clearly 7 months pregnant and harmless compared to him. Regardless of our opposing views, neither threat was acceptable.

There’s a woman named Tay on Facebook trying to change the narrative by calling me a liar saying she was right next to him and heard him say “stay out of the road so you don’t get hit” – I’ve never seen this woman in my life and the photos I have of that moment definitely don’t show her anywhere near us. I replied to her informing her of all that and she continued to get nasty and attack our business.

Also if she was, in fact, standing there, she would have heard what was also said to my husband and would be working on defending what the guy said *both times* – not just to me.

Tay’s narrative is not true and the proof is in the photos.

I did reach out to Scott McNamara but haven’t heard back just yet.” KM
In this American day and age of random acts of deadly violence and rally oppositions resulting in deadly violence, the notion that such a threat could be acted upon is not out of the question.

This alleged threat of violence is not only illegal but egregious and vile. And as the #MeToo movement continues to develop and gain momentum, it should be noted that sexual violence and sexual predation is not the only source of fear and complaint by women. The Patriarchal society in which we live does its best to smear, shame and minimize women on all levels.

And what of the response from Union leadership? There was no denial of the incident, but a different version attempting to make the woman’s claim appear unjustified or perhaps the hysterical notion of a hormone-laden preggo.

What sort of investigation was undertaken by Union leadership? Alleged or not, that sort of threatening behavior is unacceptable. This woman’s concern for her physical well-being is valid.

Why is it that no other Tradesmen had the courage to call this man out when these allegations occurred? Men who behave in such a manner should be brought up short by other men and their employers. Perhaps he is a known bully and other members know to stay away from him? And maybe there is some truth to the threat of Union reprisal?
What have we come to as a people when throngs of big, strong able-bodied men will stand by when a tiny woman, great with child is threatened with imminent physical violence simply for holding a sign with an independent view?

And what does the District Attorney have to say? CHL