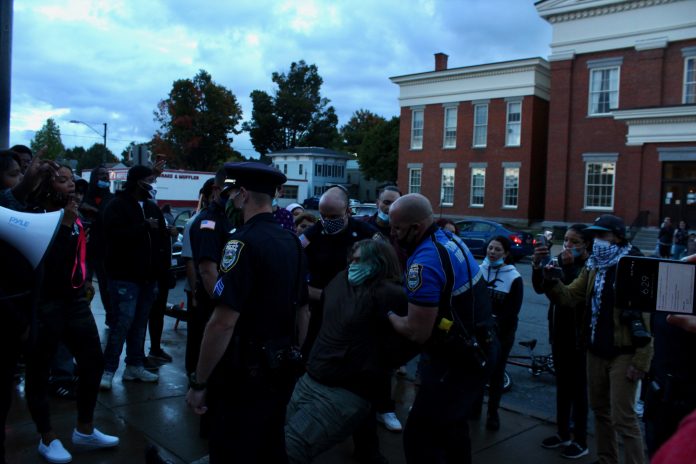 Thursday evening at Guyer Park in Rome, Rome PD responded to an incident of several youths fighting at a football game. The police detained several youths and ended the fight. This was recorded on video and locals claim that the police used excessive force.

The mostly Black and Puerto Rican teenagers were playing football when a fight broke out between girls. This violence was broken up by the police without issue, however some of the boys (possibly related to the girls) started fighting and this escalated the situation resulting in the police separating individuals and forcing them to the ground.

Sarah Malakie, who was not there until the incident ended, was contacted by a local that her son had been detained by the police. Apparently, her son had been acting responsibly and tried to deescalate the situation prior to police involvement. At some point, Malakie’s son was pushed by an officer and forced to the ground. Malakie said this prompted the son’s friends to “jump on officers” in defense of him. In three different videos, you can see RPD restraining all involved parties. According to the mother, the police showed up and were far too aggressive in handling the situation and didn’t try to discern between agitators and bystanders. 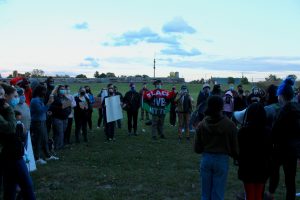 Yesterday at Fort Stanwix at 5:30pm, around 40-50 people rallied to show outrage over police using excessive force at Guyer Park. Utica pastor Robert Perry organized and lead the rally. Speeches were made in front of the fort, and then Perry lead the protesters towards Rome PD station. The crowd now numbered 60 some protesters who massed in front of the station and started shouting their demands for the RPD to address this issue of excessive force displayed at Guyer park. There wasn’t a police officer in sight. There were however sprinklers running on either side of the front entrance. The protesters speculated that this was a police tactic to ward off the demonstration. The demonstrators seemed unaffected by the sprinkler water. 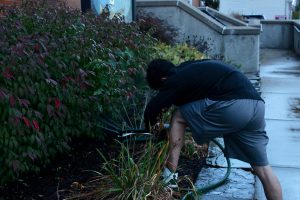 At approximately 6:25pm, a young Latino protester named Juan Gonzalez ran up towards the left sprinkler and tried to turn it off. Unable to do so, he began just trying to unscrew the sprinkler from the hose. Five minutes later, 5 or 6 squad cars raced down James street and rolled up to the building at the corner of James and Court. A half dozen officers ran after the young protester who melted into the crowd. The police began forcing their way into the crowd to apprehend Gonzalez, however a member of the Utica Abolitionists put herself between Gonzalez and the police, and then held onto Gonzalez. The police were in the middle of the crowd trying to separate the Abolitionist from Gonzalez, which they did, while the crowd massed around and shouted at the police.

The Abolitionist was forced to the ground by two officers and then was restrained and dragged inside the police station. As the police were doing this, another Abolitionist [Man C] was moving alongside the police. What happened next is unclear, but the result was the police began arresting Man C who resisted this by grabbing onto the cement half-wall on the steps. 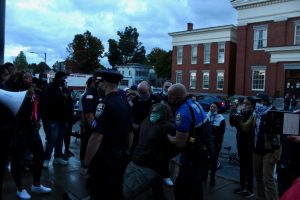 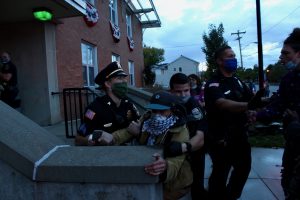 The crowd demanded the immediate release of the three individuals. Pastor Perry tried to calm the energized crowd and then went into the station to speak with the Lt.

Perry emerged, and I asked him what transpired in the building. He told me he had spoken with the Lieutenant who informed Perry that the people would indeed be charged but released within an hour and a half. I asked him how he would characterize the police response inside the building.

He characterized his experience inside the building as, “I would say…. versus the police response I got outside when they first pulled up and started attacking into the crowd, and meeting with the Lieutenant, that we reached a very good conclusion here. Ya know, and we were understandable. He [Lt] explained that they [the protesters] can’t mess with public property which we understand and I also explained to him that we didn’t know if it was a tactic to keep us off of, ya know, the police property when we pull up and there’s water hoses spraying at us.”

Reporter: And what was their reasoning for having the hoses on?

Perry: “They have apparently new grass and said there were flags in the lawn showing that they put down new grass, but I still don’t see any flags.”

Most of the people there felt this was typical of the RPD and they believe that the police completely overreacted to a minor issue of someone tampering with a sprinkler. The police themselves were cordial in talking with protesters who approached the doors.

The protesters continually shouting “Black Lives Matter”, “No Justice, No Peace”, and other chants, lingered until all three individuals were released which happened by roughly 8:30pm. Upon release, an Abolitionist (seen in the photo to the left) announced intentions to personally run for office of the 22nd congressional district in 2022.

The night concluded with Abolitionists hanging signs from telephone poles and taping demands on the station doors. Interestingly, the event was motivated by a questionable police-civilian interaction and concluded with the exact same issue.