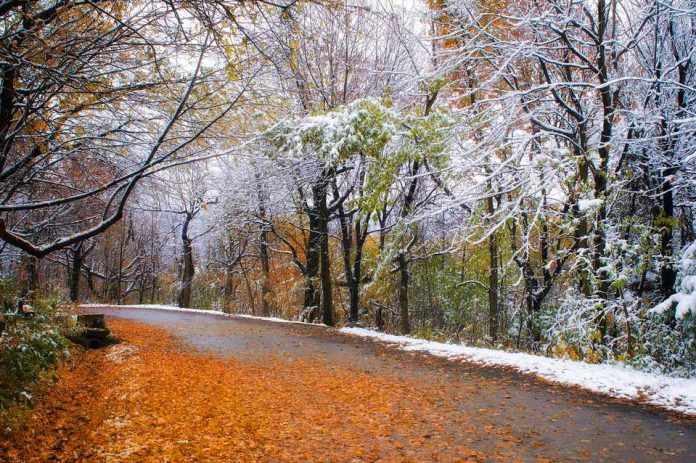 November is generally a cool to cold month with gray skies, rain, and sometimes blustery snowstorms, an early reminder of the coming winter season. The average high is 48°F and the average low is 31°F. Occasionally, temperatures are well outside the norm, from the record high 80°F in 1950 to a record low of 0°F in 1956. It is perhaps a least favorite month of many, with its early sunsets and dreary weather.

The month begins with our annual shifting back to Eastern Standard Time, this year on November 3rd. Sunset comes before 5 P.M. after this change. The month is dominated by elections, Veterans Day, and the beginning of the holiday season with Thanksgiving.

Holidays and Observances in November:

The month begins with Election Day, this year on November 5th. Off-year elections, which are mostly local, do not attract as much attention as Presidential races every four years or Congressional races every two years. Local elections include town and city councils, mayors, and county legislatures.

Veterans Day (November 11th) is a federal holiday. Originally set as Armistice Day, Veterans Day marks the end of World War I in 1918. It was changed to Veterans Day in the 1970s in order to be observed on the second Monday of the month, later changed back to the original date (the 11th). In Utica, there is a display of one thousand American flags along the Memorial Parkway a few blocks east of Genesee Street, which has become a well-established tradition in just a few short years.

By far, the largest holiday of the month is Thanksgiving Day on November 28th (the fourth Thursday of the month). Until recently, the holiday was largely noncommercial, except for the various traditional foods often prepared for the holiday when families get together. On this day, the Macy’s Thanksgiving Day Parade in New York City is broadcast live and watched by millions across the country. It is also a huge day for professional football.

Beginning the holiday season, Thanksgiving is quickly followed by the three commercial “holidays”, Black Friday, Small Business Saturday, and Cyber Monday. These days unofficially kick-off the holiday shopping season, when shopping for Christmas gifts is typically very profitable for all sorts of consumer retail businesses. Black Friday has, in many instances, begun to encroach on Thanksgiving itself with sales starting sometimes on Thanksgiving evening or at midnight. There has been some backlash to this overt interruption of the holiday, especially for retail sales workers, and it is unclear whether this will become a permanent fixture of the holiday or not.

The Saturday to Monday after Thanksgiving sees a focus on supporting small businesses, with an increase in the percentage of those shopping online, often at work. Most retailers depend upon one or all three of these days, setting the tone for the upcoming holiday shopping season.

Being pushed back earlier in recent years, it is more often the Saturday prior to Thanksgiving (or in some cases, still the Saturday after the holiday) that unofficially begins the holiday season. Santa Claus arrives at area malls, shopping centers, village greens and so forth.

If one has had enough shopping, ice hockey season will be in full swing by this time, with the Utica College Pioneers and the AHL Utica Comets providing exciting games locally nearly every weekend.

Most outdoor activities and festivals have come to an end for the year. However, in Utica, there is an annual run early on Thanksgiving Day. Many churches in the area also provide public community dinners for the less fortunate or those who live alone.

November has some interesting conjunctions. Mars is visible in the early morning sky close to Spica, the blue star of Virgo, during the first half of the month.

The crescent Moon appears to Mars’ left, with Mercury below it on November 24th. On the 25th, in the pre-dawn eastern sky, is a lineup. From top to bottom: Spica, Mars (orange), Mercury (orange), with the crescent Moon the lowest.

On November 23rd and 24th, in the early evening western sky, Jupiter and Venus are very low. On the 28th, the waxing crescent Moon is just above Venus.