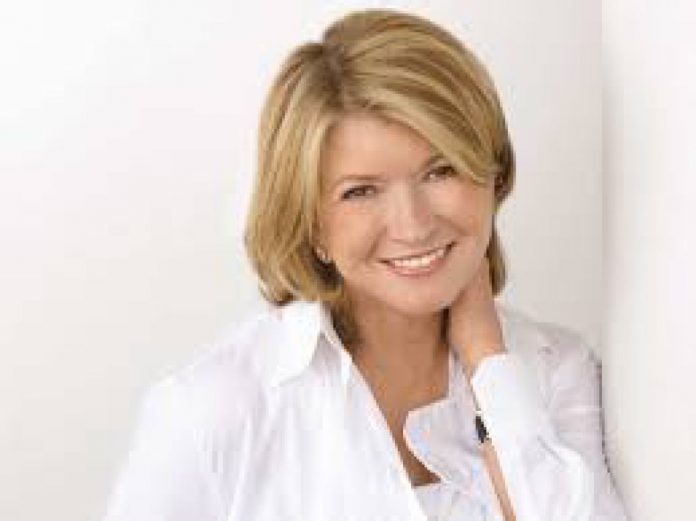 In 2004 Stewart was convicted of charges related to the Imclone Stock Trading case. There was speculation that the incident would effectively end her media Empire, but Stewart began a comeback campaign in 2005, and her company returned to profitability in 2006. Stewart rejoined the Board of Directors of Martha Stewart Living Omnimedia in 2011 and became chairwoman of her namesake company again in 2012. The company was acquired by Sequential Brands in 2015.

Early Life
Martha Stewart was born in Jersey City, New Jersey on August 3, 1941. She is the second of six children born to middle-class parents, Edward Kostrya and Martha Ruszkowski Kostrya and is entirely of Polish heritage. When Stewart was three years old, the family moved to Nutley, New Jersey. When Stewart was 10, she worked as the occasional babysitter for the children of Mickey Mantle, Yogi Berra, and Gil McCougald, American League players for the New York Yankees. Mickey and Merlyn Mantle had four sons, for whom Steward watched and/or organized birthday parties. She also began modeling.

At 15 Stewart was featured in a television commercial for Unilever. She went on to appear in television commercials and in magazines, including one of Tareyton’s “Smokers would rather fight than switch” cigarette advertisements. During her college years, she supplemented her scholarship money through modeling jobs at $50 an hour, which was a lot of money at that time. Stewart’s mother taught her how to cook and sew. Later she learned the processes of canning and preserving when she visited her grandparents’ home in Buffalo, New York. Her father had a passion for gardening and passed on much of his knowledge and expertise to his daughter. Stewart was also active in many extracurricular activities, such as the school newspaper and the art club. Stewart graduated from Nutley High School, attending Barnard College, originally planning to major in Chemistry, but switching to Art, European History, and later to Architectural History. To help pay for college tuition, she did fashion modeling for Chanel. During this time she met Andrew Stewart, who finished his law degree at Yale Law School. They married in 1961. She returned to Barnard a year after their marriage to graduate with a double major in History and Architectural History.

Career
In 1967 Martha Stewart began a second career as a stockbroker, her father-in-law’s profession. Andrew Stewart founded a publishing house and served as chief executive of several others. Andrew and Martha Stewart moved to Westport, Connecticut, where they purchased and restored the 1805 farmhouse on Turkey Hill Road that would later become the model for the TV studio of Martha Stewart Living. During the project, Stewart’s flamboyance for restoring and decorating became apparent. In 1976 Stewart started a catering business in her basement with a friend from her modeling days, Norma Collier. This became very successful, but when Collier alleged that Stewart was difficult to work with, and also taking catering jobs on the side, Stewart soon bought her portion of the business. Stewart was also hired as the manager of a gourmet food store, The Market Basket, but after a disagreement with the owners at the mini-mall, she was forced out and opened her own store. Andrew had become the president of prominent New York City publisher, Harry N. Abrams, Inc. In 1977 he was responsible for releasing the English-language edition of the Secret Book of Gnomes Series by Dutch authors Wil Huygen and Rien Poortvliet, which quickly became a block buster success and was on the New York Times Best Seller list. He contracted Stewart’s company to cater the book release party, where Stewart was introduced to Alan Mirken, head of Crown Publishing Group. Mirken was impressed by Stewart’s talent as a chef and hostess and later contacted her to develop a cook book featuring recipes and photos from the parties that Stewart had hosted. The result was her first book: Entertaining (December 13, 1982), ghost written by Elizabeth Hawes. Following Stewart’s Entertaining success, Stewart released many more books under the Clarkson Potter Publishing imprint, including Martha Stewart’s Quick Cook (1983), Martha Stewart’s Hors D’Oeuvres (1984), Martha Stewart’s Pies & Tarts (1985), Weddings (1987), The Wedding Planner (1988), Martha Stewart’s Quick Cook Menus (1988), and Martha Stewart’s Christmas (1988), among others. During this time, she also authored dozens of newspaper columns, magazine articles, and other pieces on homemaking, and made numerous television appearances on programs such as The Oprah Winfrey Show and Larry King Live. Andrew and Martha Stewart separated in 1987 and divorced in 1990.

Other Ventures in Her Career Life
In 1990 Stewart signed with Time Publishing Ventures to develop a new magazine, Martha Stewart Living, for which Stewart would serve as editor-in-chief. The first issue was released in late 1990 with an initial base of 250,000. Circulation would peak in 2002 at more than 2 million copies per issue. In 1993 she began a weekly half-hour service program based on her magazine, which expanded to weekdays in 1997 and later to a full hour show in 1999, with half-hour episodes on weekends. Stewart also became a frequent contributor to NBC’s Today Show and later to CBS’s The Early Show, and starred in several prime time holiday specials on the CBS Network. On the cover of the May, 1995 issue, New York magazine declared her to the “The Definitive American Woman of Our Time.”
Martha Stewart Living Omnimedia

In September, 1997 with the assistance of business partner, Sharon Patrick, Stewart was able to secure funding to purchase the various television, print, and merchandising ventures related to the Martha Stewart brand and consolidate them under a new company named Martha Stewart Living Omnimedia. Stewart served as chairman, president, and CEO of the new company, and Patrick became chief operations officer. By organizing all of the brand’s assets under one roof, Stewart felt she could promote and have greater control of the brand’s direction through the business’ activities. Stewart announced in Martha Stewart Living the launch of a company website and a catalogue business called Martha by Mail. The company also has a direct-to-consumer floral business. On October 19, 1999
Martha Stewart Living Omnimedia went public on the New York Stock Exchange under the ticker symbol MSO. The initial public offering was set at $18 per share, and rallied to $38 by the end of trading, making Stewart a billionaire on paper and the first female self-made billionaire in the United States. The stock price slowly went down to $16 per share by February, 2002. Stewart was then and continues to be the majority shareholder, commanding 96% control of voting power in the company.

Stock Trading and Her Conviction
According to the U.S. Securities and Exchange Commission (SEC), Stewart avoided a loss of $45,673 by selling all 3,928 shares of her Imclone Systems stock on December 27, 2001 after receiving material, nonpublic information from Peter Bacanovic, who was Stewart’s broker at Merrill Lynch. The day following her sale, the stock value fell 16%. In the months that followed, Stewart drew heavy media scrutiny, including a Newsweek cover headlined “Martha Mess”. On October 3, 2002 Stewart resigned her position, which she held for four months, on the Board of Directors of the New York Stock Exchange, following a deal prosecutors had made with Douglas Faneuil, an assistant to Bacanovic. On June 4, 2003, Stewart was indicted by the government on nine counts, including charges of securities fraud and obstruction of justice. Stewart voluntarily stepped down as CEO and chairwoman of her company, but stayed on as Chief Creative Officer. She went on trial in January, 2004. Prosecutors showed that Bacanovic had ordered his assistant to tell Stewart that the CEO of Imclone, Samuel D. Waksal, was selling all his shares in advance of an adverse Food and Drug Administration ruling. FDA action was expected to cause Imclone shares to decline.

Her Sentence
After a highly publicized six-week jury trial, Stewart was found guilty on March, 2004 of felony charges of conspiracy, obstruction of an agency proceeding, and making false statements to federal investigators, and was sentenced in July, 2004 to serve a five-month term in a federal correctional facility and a two-year period of supervised release (to include five months of electronic monitoring). Bacanovic and Waksal were also convicted of federal charges and sentenced to prison terms. Stewart also paid a fine of $30,000. In August, 2006 the SEC announced that it had agreed to settle the related civil case against Stewart. Under the settlement, Stewart agreed to disgorge $58,062 (including interest from the losses she avoided) as well as a civil penalty of three times the loss avoided or $137,019. She also agreed to a five year ban from serving as a director CEO or any other officer role responsible, auditing or disclosing financial results of any public company.
Comeback

Following her release from prison in March, 2005, Stewart launched a highly publicized comeback and was once again involved in Martha Stewart Living. In a move from broadcast television to cable, on January 26, 2010, Hallmark Channel and Martha Stewart Living Omnimedia announced a multi-year strategic partnership. Her hour-long daytime television series, Martha, formerly the Martha Stewart Show, moved to the Hallmark Channel on September 13, 2010. It aired on Hallmark for two seasons before cancellation in early 2012. A new television series, Martha Stewart’s Cooking School debuted on PBS in October, 2012. Each weekly 30 minute episode covered cooking techniques and basis. In the fall of 2016 VHI premiered a new show featuring Martha and her friend, Snoop Dog, called “Martha & Snoop’s Potluck Dinner Party” featuring games, recipes, and musical guests. Martha Kostyra, Stewart’s mother, who was also a great cook, died at the age of 93 on November 16, 2007. Kostyra also called “Big Martha” by her family had also appeared on Martha Stewart Living numerous times. Stewart currently resides in Katona, a hamlet of Town of Bedford, Westchester County New York. In 2011 she was inducted into the New Jersey Hall of Fame. That same year her net worth was $638 million.