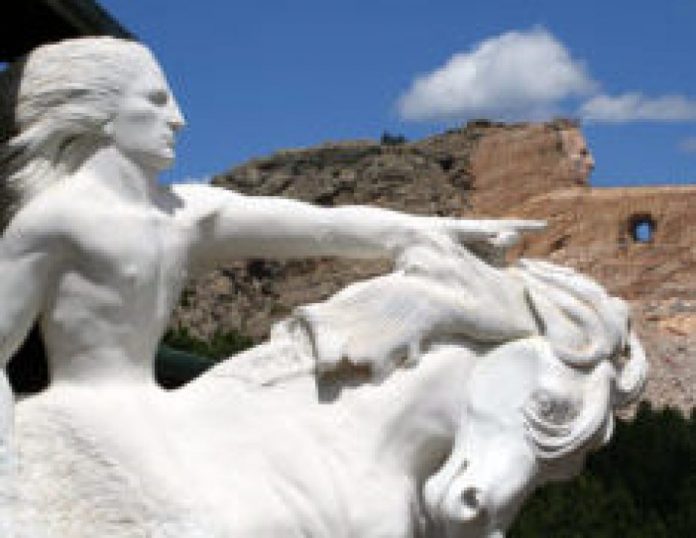 A mountain monument is under construction on privately held land in the Black Hills, Custer County, South Dakota, United States. It will show Crazy Horse, an Oglala Lakota warrior, riding a horse and pointing into the distance. The memorial was commissioned by Henry Standing Bear, a Lakota elder, to be sculpted by Korczak Ziolkowski, a Polish-American designer, and sculptor.  The project is operated by the Crazy Horse Memorial Foundation, a private non-profit organization. The Indian Museum of North America and The Native American Cultural Center also helped.

The monument is being carved out of Thunderhead Mountain on land considered sacred by some Oglala Lakota natives.  It is located between Custer County and Hill City, roughly 17 miles from Mount Rushmore.  The sculpture’s final dimensions are planned to be 641 feet wide and 563 feet high.  The head of Crazy Horse will be 87 feet high; by comparison, the heads of the four United States presidents at Mount Rushmore are each 60 feet high.  The monument has been in progress since 1948 and is far from completion. If completed, it may become the world’s largest sculpture, as well as the first non-religious statue to hold this record since 1967, when it was held by the Soviet Monument, The Motherland Calls.

Crazy Horse was a Native American war leader of the Oglala Lakota.  He took up arms against the United States Federal Government to fight against our government on the territories and way of life of the Lakota people.  His most famous actions against the United States Military included the Fetterman fight (21st of December, 1866) and the Battle of the Little Big Horn (25th &26th of June, 1876).  He surrendered to United States troops under General Crook in May 1877 and was fatally wounded by a military guard while resisting imprisonment at Camp Robinson in present-day Nebraska.  He ranks among the more notable and great leaders of Native  American tribal members and was honored by the United States Postal Service in 1982 with a 13 cent postage stamp as part of its Great American Series.

Korczak was born on September 6, 1908, in Boston, Massachusetts to polish parents.  Orphaned at the age of one, he grew up in a series of foster homes.  Although he never received any formal art training, his gifts as a sculptor began to show at an early age. After putting himself through Rindge Technical School, he became an apprentice to a Boston ship maker.  He began to carve wood and by the age of 20 had become an accomplished furniture maker—his first marble sculpture, made in 1932, honored Judge Frederick Pickering Cabot, who had inspired him as a child growing up in the rough neighborhoods of Boston.  Ziolkowski moved to New Britain, Connecticut to begin life as a professional artist.

He began to sell commissioned sculptures throughout New England and New York. In 1939 he was hired as a sculptor’s assistant by Gutzon Borglum on his Mount Rushmore project of the heads of the four United States presidents.  According to Lincoln Borglum, Gutzon’s son, Ziolkowski was unhappy, having expected to be made the primary assistant, instead, Lincoln was the primary assistant.  He worked on the Mount Rushmore project for a while and then moved on.  He continued to work on his sculpture of Ignacy Jan Paderewski who was Prime Minister of Poland and won first prize at the New York World’s Fair.  The resulting fame, as well as his familiarity with the Black Hills, prompted several Lakota chiefs to approach him about a monument honoring Crazy Horse.

The Chief wrote Ziolkowski saying, “My fellow chiefs and I would like the white man to know that the red man has great heroes, too.  Ziolkowski met with the leaders shortly afterward and began planning the sculpture.  He also met Ruth Ross, a young art enthusiast, who would later become his second wife.  He put the project on hold when the United States entered World War II.  He volunteered for service in the United State Army and was wounded in 1944 at Omaha Beach in Normandy.  He was a sergeant and Chief of Section in the anti-aircraft artillery.

In 1947 Ziolkowski moved to the Black Hills and began to search for a suitable mountain for his sculpture.  The Lakota wanted the memorial to be in the sacred Black Hills on a 600-foot high mountain.  The monument was expected to be the largest sculpture in the world.  When completed, it would be 563 feet high by 641 feet long.  Crazy Horse’s head would be large enough to contain all the 60 foot-high heads of the presidents at Mount Rushmore.

The First Blast Made

On June 3, 1948, the first blast was made, and the memorial was dedicated to the Native American people.  In 1950 Ziolkowski and Ruth Ross, who had become a volunteer at the monument, were married.  Work continued slowly since he refused to accept government grants. Instead, as he personally stated on a guest appearance on the TV show ”To Tell the Truth”, he raised money for the project by charging seventy-five cents admission to the monument work area.  Korczak had always referred to himself as a storyteller-in-stone.  This project in the Black Hills was larger than his life.  He faced monumental challenges and blazed a trail not only to carve a memorial to the Indian people but also to make a home for his family and to make Standing Bear’s dream come true.  Taking the vision of Chief Henry Standing Bear and making it his own, Korczak dreamed of a university, a medical training center, a museum, and educational and cultural center and more at the Crazy Horse Memorial. Ziolkowski’s wife, Ruth, was 18 years younger and embraced his dreams.  As the years passed, she took care of their 10 children, five girls and five boys, the visitors, a dairy, a sawmill, and Korcazk.  He worked hard and met many challenges in 35 years of making the dream become a reality.  Ruth was his greatest supporter, besides him every step of the way.

He has long been a controversial figure, so perhaps it’s only appropriate that his memorial follows suit.  Though he is best known for fighting against George Armstrong Custer at the Battle of the Little Big Horn, Crazy Horse led his tribe numerous times against settlers and miners in the Dakotas, Montana, Wyoming, and elsewhere before his 1877 death at Nebraska’s Fort Robinson.  In the mountains of the Black Hills, South Dakota, rests the Crazy Horse Memorial. It pays tribute to the Native American war hero with a sculpture that, at many times the size of nearby Mount Rushmore, will one day constitute the world’s largest mountain carving.  Though the project has been ongoing since 1948, it’s far from finished and there isn’t a rush because there isn’t a deadline. Harsh weather—including lightning storms and blizzards and the mountain’s high iron content makes the rock tougher to crave.  The sculpture will stand 563 feet tall, a few feet higher than the Washington Monument in Washington, DC.

During nearly 36 years Korczak refused to take any salary at the Crazy Horse Memorial.  Much of the earth-moving equipment used was donated by corporations.  The work on the monument has been primarily supported by visitor fees, with more than one million people visiting annually.  The Visitor Center contains many pieces of rock blasted from the mountains.  Visitors may take samples in exchange for a small donation.

Death and the continuation of the Crazy Horse Memorial

Sculptor Korczak Ziolkowski and Lakota Chief Henry Standing Bear set out to carve a mountain just south of Mount Rushmore in 1948.   Korczak died in 1982 at the age of 74.  A heart attack claimed his life.  He was interred in a tomb which he and his sons chiseled in stone, years before at a spot which someday will be the base of the giant sculpture when completed.  On the tomb door—“Korczak, Storyteller-in- Stone, May his remains be left unknown”.  After his death, his widow, Ruth Ziolkowski, took over the project as Director of the Crazy Horse Memorial Foundation.  She picked up where he left off.  At age 82, she continued to guide the process of carving a mountain and fulfilling the dream. Ruth Ziolkowski died on May 21, 2014, at the age of 87.  All ten of his children have continued the carving of the monument or are active in the Crazy Horse Memorial foundation.  One hundred years after his birth, his work continues.  A few words of wisdom Korczak left to his children were, “Never forget your dreams”.