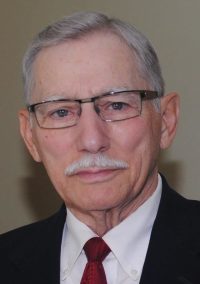 The bully in Albany is winning the downtown hospital conflict.

He is, due to the weakness of our local government officials who are:

a. asleep at the switch

b. concerned about their own personal benefit

The others who piled on the bandwagon are sincerely sold on a “fixing the neighborhood” syndrome.

They do not see past the shinny Trojan Horse bringing a future of dept as well as ruination of history, architecture and the police campus.

If a new hospital is a good way of rehabbing a run-down neighborhood, let us build one in Cornhill (South Street), East Utica (eastern Bleecker Street) and West Utica (western section of Whitesboro Street).

Hey, then Utica will all be “fixed.”

If you believe the above, I have a bridge for sale in Georgia that runs over a swamp.

“Stupid is as stupid does!”

Stupid got us a huge bridge that ate two and one-half blocks of history and architecture in the lower Genesee Street-Bagg Square area.

It did not help restore the vitality of downtown –  ballyhooed as the ultimate panacea for “fixing downtown” and Utica.

Look to the Bagg Square East Corridor for a solution.

It took: federal money, county money, grants, loans, private entrepreneurship and a few original Landmark Society members with guts to get it done.

The downtown hospital decision is so egregious that anyone who has voted it to happen ought to have an engraving on their “tombstone” indicating” “Here lies a scoundrel who once was an ineffectual, greedy politician.”