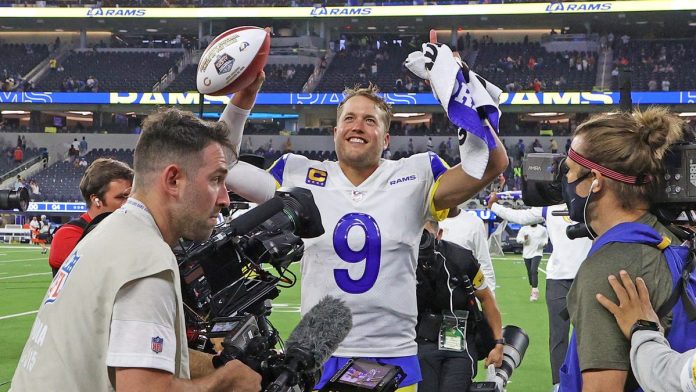 Pump the brakes on Matthew Stafford.

In fact, put your seatbelt on, too.

This is hardly going to be an easy ride, no matter how the journey started on Sunday.

After his impressive debut as the Los Angeles Rams’ new starting quarterback, many are calling him the Messiah, the missing piece to a Super Bowl championship.

What Stafford did — 321 yards, three touchdowns and a 156.1 QB rating — in the Rams’ 34-14 drubbing at home against the Chicago Bears wasn’t anything the Rams haven’t seen from their quarterback.

Let’s not ignore history or act brand new. The Rams already had a Pro Bowl QB who led them to the Super Bowl. It’s the guy they now call a bum: Jared Goff. He was traded with a boatload of draft picks for Stafford in the offseason.

And that bum, by the way, had an impressive debut for the Detroit Lions, with 338 yards, three touchdowns, and one interception in a loss to the San Francisco 49ers.

The fact remains that Goff played some great football for the Rams. In the 2018 season, the year he led them to the Super Bowl, the Rams scored at least 30 points in 75 percent of their games. The Rams tied a franchise record with 12 30-point games, matching the total set by the 1999 team. If you can’t go that far back, that team, led by Hall of Famers Kurt Warner and Isaac Bruce, was nicknamed “The Greatest Show on Turf.”

The Rams were just the fourth team in NFL history to have at least 400 first downs.

And for Goff individually, he had two seasons under Rams coach Sean McVay with higher QB ratings (100.5 in 2017 and 101.1 in 2018) that were higher than ANY season where Stafford played at least 10 games.

Hence, Stafford, 32, isn’t adding anything the Rams haven’t had in the past.

This team has been an offensive juggernaut in seasons gone by.

So beating the Bears by a lot in September isn’t the goal. It’s about winning a championship in February.

And there’s a big difference between the two, especially when you’re talking about Stafford, who has NEVER won a playoff game (0-3), or a division title, in his first 12 years in the league with the Lions.

The Rams have mortgaged their future for Stafford, who entered the season with an 8-67 (.106) record against teams that finish with a winning record.

Nonetheless, McVay’s reputation is at stake. He has talked up Stafford so big and the hype is so over the top, there’s no turning back. McVay is attached to Stafford for life.

The only way the Stafford trade will be a success for this organization is if the team wins a championship in the next few years. Anything less, and it’s a total failure.

The last time they went to the Super Bowl, McVay was undressed by Patriots coach Bill Belichick’s defensive scheme. McVay’s high-powered offense could only muster a field goal, losing 13-3.

If they don’t get it done this time, the franchise will have a hard time recovering with all the top draft picks they gave up with this win-now mentality.

It’s not the wrong approach. It’s just that you have to win when you push all your chips in the middle of the table, especially for a guy who hasn’t won big games in his career.

And before you use the Lions as the excuse why Stafford hasn’t excelled as many thought when he was the first overall pick in the 2009 NFL draft, save it.

First, Stafford played with some great players in Detroit, including first-ballot Hall of Fame wide receiver Calvin Johnson. Johnson was inducted into the Pro Football Hall of Fame earlier this year.

In 2014, the Lions had their best team. They were 11-5, had a top 5 defense and could have honestly made noise in the postseason. Stafford and the Lions lost the final game of the season to the Green Bay Packers. It cost the Lions the division and a first-round bye. Instead, the Lions lost to the Dallas Cowboys in a road wild-card game.

For Stafford and the Rams this year, it’s a Super Bowl victory or bust.