First Egg of the 2020 Breeding Season for Utica Falcons 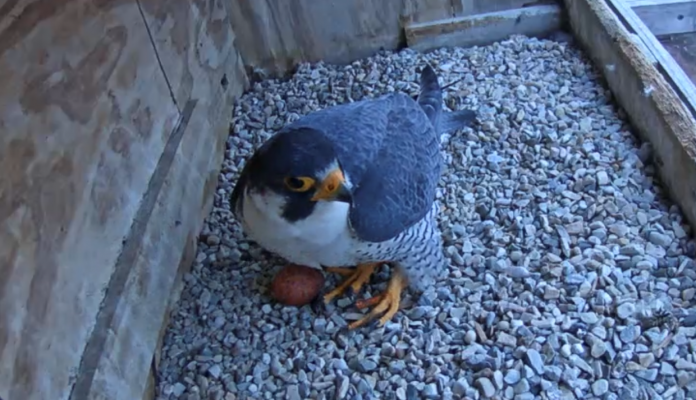 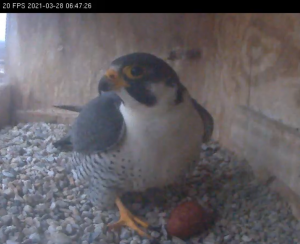 The pair of Peregrine Falcons nesting in Downtown Utica now have an egg in their nest box. On Saturday, March 28, at approximately 9:44 PM, the falcon female named Astrid laid her first egg of the 2021 breeding season. Nest watchers associated with the Utica Peregrine Falcon Project have been monitoring the progress of the nest and were expecting an egg to appear sometime in late March or early April. The egg laid Saturday night is the first of what is expected to be a clutch of four to be produced over the coming days. Astrid typically lays her eggs at intervals of a little more than 60 hours, so the next egg should come sometime Monday morning.

The falcon pair (Astrid and Ares) have been breeding in Downtown Utica since 2014 and in that time have produced a total of 21 young. The incubation period for Peregrine Falcons is about 33 days and so hatching of the eggs should begin in early May. Male Peregrine falcons provide most of the food arriving at the nest during the first half of the breeding process – from before the eggs are laid through the time the young venture out of the nest. Male falcons also play a role in incubating the eggs, so we expect Ares to become increasingly busy in the next two months.

Astrid and Ares first claimed Downtown Utica as their territory in the fall of 2012. They are believed to be approximately 11-years old. Peregrine Falcons, which are famous for being the fastest birds in the world, remain on the Endangered Species List in New York State. There may now be as many as 100 pairs known to nest in the State. About half of those nest sites are in the wild and half are in urban areas and on high bridges. Urban falcons feed mostly on non-native Rock Pigeons and European Starlings, but they also prey on a wide variety of other birds. Monitoring of falcon nests is done for both conservation and educational purposes. Live streaming video from the Utica nest is available at the UPFP’s website: UticaPeregrineFalcons.com

Regular updates and videos can also be found on the Utica Falcon Watch Facebook page.