Syracuse NY, Aug 28 2022—When the Loughlin Lenses (and I) rolled into Chevy Court on my rented “Scootaround” mobility scooter, I was surprised and delighted to see my (I’m a former Shriner) fellow Nobles of the Mystic Shrine on hand vigorously selling Foreigner CDs to eager rock fan customers.

Then and there I knew I knew that my Utica Phoenix exclusive story and photo shoot had just taken an unexpected turn and that “rock and charity” would be the theme of my coverage.

After recuperating from the two-day blitz trip, the Fair—which incorporated helping the League of Women Voters staff thee voter registration effort AND created more than 600 images at the Foreigner concert—I consulted with Shriner Mark Alvarado to get me some photo IDs and a little background on this  “new” Shriner fundraiser. The Shrine Circus is no longer brought to Utica to fund Ziyara activities such as transporting children to the  Shriners Children’s Hospital in Springfield, Mass. Ziyara was the 11th Shrine Temple established in the U.S. and has been part of the Utica fraternal and charity scene since October 30, 1977.

Mark not only provided me with insights, he wrote the following; a look at the music/CD sales effort from his own personal point of view.

Foreigner dazzled all of the “Jukebox Heroes” at the State Fair Chevy Stage in Chevy Park, as they have for many years. This year, Nobles from the local Shrine Centers, Ziyara (Utica), and Tigris (Syracuse) banded together as usual and raised funds for the Shriners Children’s (Hospital). The Nobles from Ziyara were: Noble Dan Rena, Noble Robert Grimaldi, II, Noble Mark Alvarado; and they were joined by illustrious Fred Rembetski, past [Shriner] Potentate and his wife, Sandy.

Annually, the Shriners look forward to working with “Rock-It-Kids” to partner with musical bands to sell their CD, physical or digital, and usually with a chance at the signed guitar.  This program usually has a portion benefiting the Shriners Children’s (Hospital). Shriners from all around get to have fun while helping a great cause.

The local Shriners, Ziyara, are one of the oldest Shriners groups in Shriners International being the 11th established Shrine Center (Chapter). Shriners International was started in New York City in 1877 when a doctor (Walter Fleming) and an actor (Billy Florence) got together after a Masonic Lodge meeting and decided they would enjoy more fun in Freemasonry. 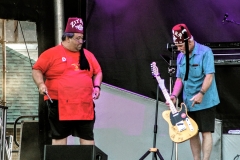 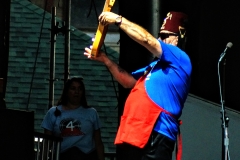 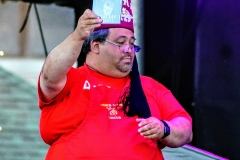 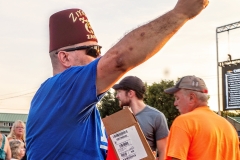 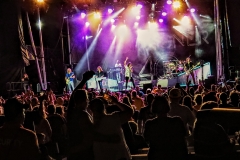 In 1922, Shriners International embarked on a new journey and opened the first hospital for children with orthopedic needs. Today, Shriners transport the patient as well as their parent or guardian. Hotels, meals, gas, wear and tear on the vehicle, and the restored expert care is at no cost to the patient’s family. Shriners own and operate 22 hospitals (Orthopedic and Burns) in North America and Mexico but they have helped children from other countries as well, most recently, the Ukraine.

When looking back at all of the musical acts that I have been able to see, I realized that I wasn’t a huge fan of most of the acts. I didn’t know most of their songs, or so I thought. It turns out, I did know a ton of songs. Some of the bands that I have seen have been Foreigner, 38 Special, Peter Frampton, Whitesnake, Cheap Trick, Breaking Benjamin, Kid Rock, REO Speedwagon, Bryan Adams, Styx, Boston, Charlie Daniels, and so much more.

Without this experience, I am pretty sure I wouldn’t have experienced all of these great bands. I wouldn’t have been on stage during the promotional time either. Looking out into the sea of people is quite a nerve wracking experience. We are lead behind the stage to do our promotional work on the very stage that they have or will be performing.

Each of us [took] a turn showing off the chances the patrons could win. To me, it is a time for the Shriners to not only show off our signed guitar but our “blingy” fezzes. In speaking with fans, several get to their seat nine hours or more in advance at Chevy Park. All in all, I believe in our mission to help a child walk or get healed from a debilitating fire.