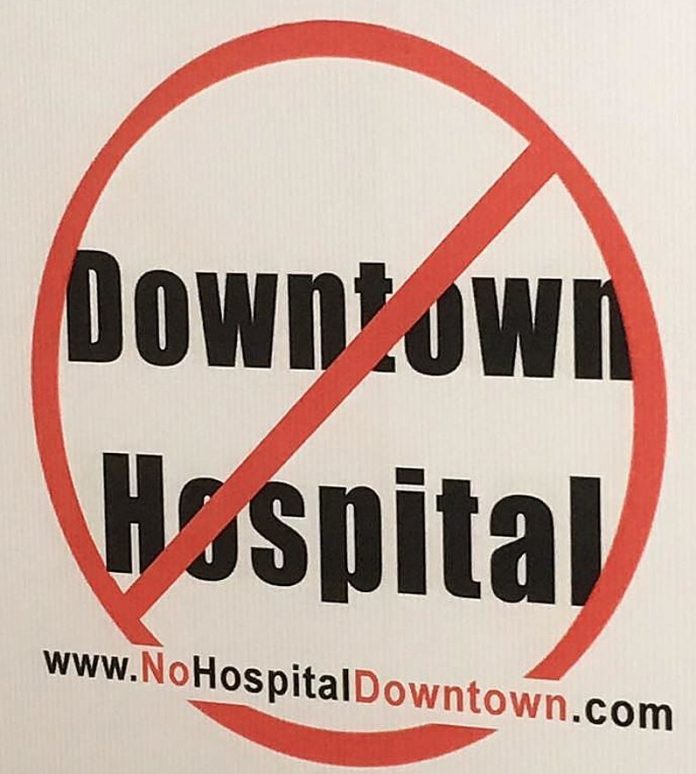 On Halloween, the State Supreme Court in Albany heard oral arguments in No Hospital Downtown’s ongoing lawsuit. This appearance was the return date of the motions to dismiss made by Mohawk Valley Health Systems (MVHS), the City of Utica and the Dormitory Authority of the State of New York (DASNY). This lawsuit was brought by multiple plaintiffs including, #NoHospitalDowntown, the Landmarks Society of Greater Utica, O’Brien Plumbing & Heating Supply, Joseph Bottini, Frank Montecalvo, Joseph Cerini, James Brock, Jr and Brett Truett. Attorney Tom West, of West Law Firm in Albany, represented these plaintiffs.

Their main grievance involves a seriously flawed State Environmental Quality Review Act (SEQRA) process. This required step exists to evaluate the multiple adverse impacts of a project of this size and complexity. The judge will eventually determine whether or not MVHS executed the requirements of a legal and proper SEQR. The lawsuit contends that the buildings, most of which are historical, and the Erie Canal era artifacts within the proposed downtown site were not properly evaluated in this process. Additionally, they charge that impact to traffic patterns, compliance with Utica’s Master Plan and alternatives to the downtown site were not properly assessed due to that flawed SEQR. West stated to the court that the site selection process used in Mohawk Valley Health Systems’ SEQR document was “pathetic.”

The defendants contend that this lawsuit is premature because DASNY has not yet bonded for their $300 million dollar grant contribution. New York State Assistant Attorney General Simmons stated to the court that MVHS has not requested bonds from DASNY, nor has DASNY issued any bonds to MVHS. She also implied that it is possible MVHS may not get the $300 million. Historically, DASNY has been reluctant to issue any bonding for projects until all legal issues are resolved. The total budget for the project is estimated to be around $500 million, though No Hospital Downtown claims it will be closer to $1 billion if constructed as planned.

The site plan that was approved by the City of Utica’s Planning Board is contingent upon MVHS having an adequate amount of parking on site, including a number of acres for surface parking and a multi-story parking garage. MVHS attorney Kathy Bennett told the judge that MVHS owned all of the property within the footprint of the proposed hospital building.

In fact, MVHS does not own all of the property required for their entire project as their own final site plan and the SEQR define it.  While MVHS does own the property directly under the hospital building, they do not own all of the land for parking, which is needed to complete the project as described. A graphic of the site plan obtained from #NoHospitalDowntown illustrates the properties claimed on MVHS’s Final Site Plan that MVHS does not currently own.

Additionally, at least one landowner in the project footprint has vowed never to sell, potentially forcing an eminent domain action by the City of Utica. Mayor Palmieri has previously stated that the city will use eminent domain to obtain these properties but it is unclear whether that is legal because alternate sites exist.

Supreme Court Justice L. Michael Mackey allowed a photo into evidence that documented MVHS’s demolition of the first building in the footprint, a converted 19th century carriage house. MVHS falsely claimed that the building at 496 Columbia Street was not a historic structure.

Judge Mackey listened carefully to both sides for over an hour and asked several clarifying questions. He has yet to render a decision on the motion to dismiss, and will allow the defendants one week to respond to his questions in writing. A return date has not yet been set.