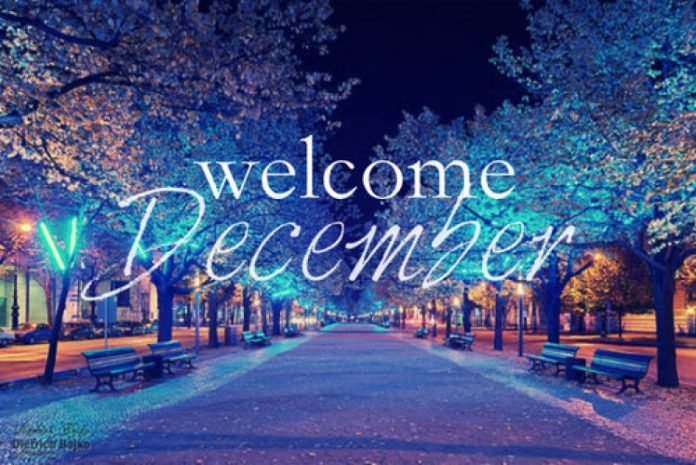 December usually means cold and snow, accented by sometimes bright sunny days that are all too short, with sunset before 5 p.m. December’s long nights are made more cheerful with the extensive public, commercial, and private home Christmas light decorations. It is a month-long festival of lights, the lighting of the candle of the Christ Child at Christmas, the celebration of the returning sun with the solstice.

Holidays and Observances in December

December has become a month-long festival that lasts from Thanksgiving into the New Year. There are many aspects to the only religious holiday that is also a national holiday. Utica has as wide a variety of ethnic foods and decorative traditions as anywhere, and nearly everyone participates in some event related to the holiday season.

It is not coincidental that the official date of Christmas was officially set by the Church to be at the time of the winter solstice. Lights and candles were used to ward off winter darkness. Bonfires and yule logs affirmed that the days were now becoming longer after several months of early darkness, especially in northern latitudes. The fixing of this date near the solstice assured the dominance of the religious holiday, superimposing a religious holiday over ancient solstice traditions, providing a fusion of the two, dominated by the Christian tradition.

And so we have religious and secular festivals of lights, from Jewish Chanukah through Christmas and Kwanzaa. All of these religious and cultural holidays have in common the ancient rhythm of solar and lunar cycles. At the solstice, the sun literally stands still with Utica’s sunset before 4:30 p.m. from November 23 to December 24.
In addition to family reunions and work parties, there are many religious and secular concerts of music of the season, ranging from productions of the Nutcracker Ballet in Utica and Clinton to church and school winter holiday concerts. And of course, Christian churches have some of their most elaborate and musical celebrations of the year on Christmas Eve or Christmas Day.

In the Night Skies
Planets are not very visible this month until pre-dawn hours with both Jupiter and Mars rising after 3 A.M. The Full Cold Moon is on December 3. Alternative names include the Long Nights’ Moon or Moon Before Yule. The Geminid Meteor Shower starts about 9 P.M. on the 13th. It should be one of the year’s best meteor showers as the Moon is a thin crescent rising after 3 A.M. The Winter Solstice is on the 21st, and winter officially begins at 11:28 A.M.

Rising and Setting Times on the Winter Solstice, December 21

Facebook
Twitter
Previous articleSam Pellman Was My Friend
Next articleStop Tax Giveaways to the 1% at Expense of the Middle Class!