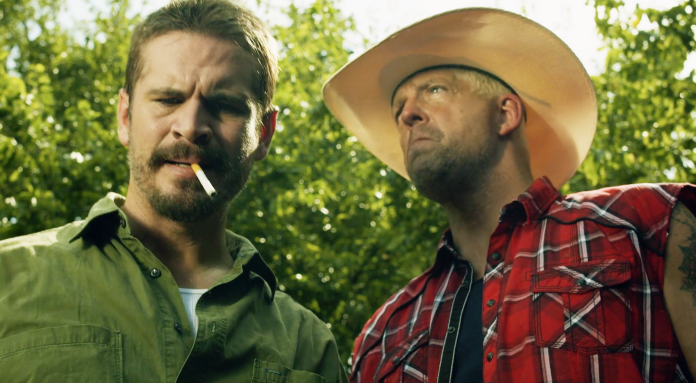 “Copper Bill” is a crime caper, and the new independent film from Brett Bentman, the mind behind last year’s “90 Feet From Home;” and shows, once again, Bentman’s flare for painting Texas landscapes and bringing large personalities to life. The film reunites Bentman with actor Thom Hallum his last production, as well as introducing the film debut of Dustin Rhodes—WWE/AEW legend and son of famed wrestler Dusty Rhodes The film has that gritty, raw feeling that made “90 Feet From Home” engaging, while poising itself as more standard fare, going for a wider audience. The effort works—mostly. Its leads perform well, its story flows with relative ease, and the film even tries its hand at some twists to keep its audience guessing. However, it suffers from an over-reliance on plot over substance, trading its depth for what it wants to be shocking plot developments.

Watching “Copper Bill,” I was struck with what a capable actor Thom Hallum is. In this film he plays Jessup, a down-on-his-luck gambler-turned-thief who must rob a mute woman on a farm to pay back debts. In his last film, the aforementioned “90 Feet From Home,” he played a cop and family man who must try and convince his embittered brother let the hatred of their abusive father go. He’s able to shift hats rather well, and here presents a quasi loser that we grow to care for, and one we hope finds his way out of his luckless way of life, not matter how vile some of his decisions may be.

“Copper Bill” has a lot of elements to it that it tries to pack into its first 45 minutes, and the result is some cramping and guessing games that could have been sewn up more tightly with added run-time or minimization of certain characters. For instance, we have its introduction of Dustin Rhodes, playing a man named ‘Mitchell,’ who is an enigma and that ‘go-to’ guy you call when you’re in debt and need a favor. Rhodes plays the character well, and Bentman shrouds him in enough mystery to make his scenes land solid and strong. For the small sum of ‘half the money,’ Mitchell agrees to try and postpone a man referred to simply as ‘The Indian’ from collecting Jessup’s debt either dead or alive.

Via Rhodes, we’re also introduced to a man named Ricky (Tom Zembrod) a square who wears a tie and sits behind a desk that we glean used to be a real tough-guy before he made the smart decision to just ‘pay the bills.’ Adding Lily (Katy Harris), a woman living alone on a massive farmhouse that Mitchell and Jessup target for the sum of $80 million (as well as s few ancillary characters), rounds out the cast.

“Copper Bill” knows exactly what kind of film it is, and never pretends to be anything different. This is a caper film, with some twists, and quickly inserts us into its world of criminals and paydays. The crux of the film revolves around the duo of Mitchell and Jessup, and the two deliver, playing off each other well as the film’s plot is advanced. One critic opines that Mitchell and Jessup ’simply work;’ and they’re not wrong. They’re engaging and work well together. However: while some motivation and character depth is later given to Jessup, the same cannot be said for Mitchell, which was disappointing. Rhodes pours himself into the role; of the cast, I feel I liked Rhodes’ scenes the most; but, alas, he’s not given the kind of depth that really lets him sink his teeth into anything.

I also have to hand it to Bentman for walking us through most of the film’s scenes with grace, where a dirtier-feeling film would have been easier to make. A crux of the movie centers on the duo attempting to intimidate the location of the money out of Harris’ character, who is mute. And though things get nasty, and Rhodes even once brandishes a drill and threatens to use it, “Copper Bill” stays firmly centered on the narrative and never once becomes ill-fitting or mean. Harris is a good actress. And, with not much that answers for opportunity until the film’s final act (which won’t be spoiled here), she makes us feel for the condition that the three of them find themselves in.

“Copper Bill” tries. It’s got good acting, sets its landscape well, and presents several characters we grow to care for. For me, it comes apart towards its end by piling on dramatic twists in lieu of developing its characters, as well as an ending that is a bit anticlimactic and standard. Underneath it all, it’s a standard heist picture, made well for an indie production, and will entertain fans of the genre or Bentman’s work. It lacks the emotional depth of “90 Feet From Home,” or its urgency, but is still entertaining and engaging. A solid attempt that leaves me once again looking forward to more from Bentman and company in the future.