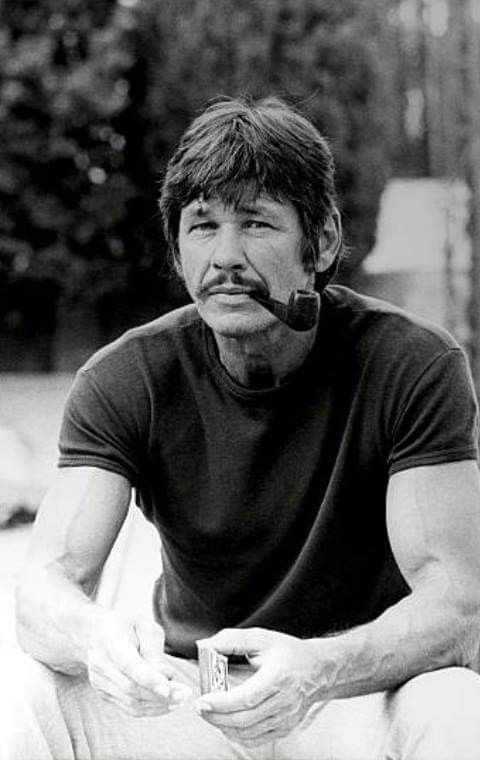 According to the Polish-American Encyclopedia, Charles Bronson was born to a Lithuanian-Polish father, who worked in the coal mines of Pennsylvania. Charles Bronson was born on  November 3, 1921 in Ehrenfeld, Pennsylvania.  He was born into poverty, the eleventh of fifteen children.   His father  died when he was eleven and  to a mother, who died when he was thirteen.  He faced a life in the coal mines until 1943, when he was drafted into the United States Army Air Corps.  While serving as a tail gunner on a B-29 super-fortress in the Pacific theater, he was wounded, but completed 25 missions over Japan.  After the war, he went to art school in Philadelphia on the G.I. Bill.   Then he moved to Atlantic City, New Jersey, where he supported himself with menial jobs.  He moved to New York along with his roommate, Jack Klugman, to play stock theater.  In 1949 he moved to California, enrolled at the Pasadena Playhouse, and was “discovered” by director Henry Hathaway, who offered him his first film role in 1951’s, “You’re in the Navy Now”.  He chose acting as a career, because it paid a lot of money.

Bronson’s first film role was as a Polish sailor in that movie and over the next few years he had small, sometimes uncredited roles in several movies and television shows.  The leathery-faced muscular actor has played bigger parts in such B-films as Miss Sadie Thompson (1953), Apache (1954), and Drumbeat (1954).  His first movie credit was in Big House, USA (1955).  He played the title role in Machine Gun Kelly (1958) and appeared in several  television series, even starring in the short-lived Man with a Camera (1958).  More memorable film roles followed in The Magnificent Seven (1960), The Great Escape (1963), The Dirty Dozen (1970), Time in the West (1968), and Rider on the Rain (1970)—made Bronson famous in Europe, and he earned an honorary Golden Glove Award in 1972 as a ”world film favorite”. Bronson was nominated for an Emmy Award for his supporting role in a TV-episode entitled ”Memory in White”. In the 1970s he became one of the top ten box-office stars.  He made films in many genres, including , crime and western.

His Career On a Move Now

Charles Bronson began to find work in television and appeared in Bonanza, Big Valley, Rawhide, and Gunsmoke—all popular Western television series.  Bronson had a big hit with Death Wish (1974).  The success of the film, where he played an architect turned vigilante, resulted in four sequels  cemented his image as a tough guy.  Later roles included Death Wish V (1994), The Indian Runner (1991), and Family Corps III (1999).  Bronson made a film with French actor Alain Delow entitled “Adieu l’ami.  It was a success in Europe and let to other European roles which bought Bronson international fame.

Other early screen appearances were In the Mob (1951), The People Against O’Hara (1951),directed by John Sturges; Bloodhounds of Broadway (1952); Battle Zone (1952); Pat and Mike, as a boxer and mob enforcer (1952); Diplomatic Courier (1952), another for Hathaway; My Six Convicts The Marrying Kind (1952); Red Skies of Montana (1952).  In 1952 Bronson boxed in a ring with Roy Rogers in Rogers’ show knockout.  He appeared on an episode of The Red Skelton Show as a boxer in a skit with Skelton playing “Cauliflower McPugg”.  He appeared with fellow guest star Lee Marvin in a episode of Biff Baker, USA, an espionage series on CBS starring Alan Hale, Jr.  He had small roles in House of Wax (1953) with Vincent Price, and  Riding Shotgun, starring Randolph Scott.  Bronson had a notable support part as an Indian in Apache (1954) for director Robert Aldrich, who then used him again in Vera Cruz (1954).  Bronson then made a strong impact as the main villain in the Alan Ladd western Drumbeat as a murderous modock warrior, Captain Jack (based on a real person), who relishes wearing the clothes of soldiers he has killed.  He guest-starred in the short-lived CBS situation comedy, Hey Jeanie! and in three episodes of Alfred Hitchcock Presents; “And so Died Riabouch Inska” (1956), “There Was an Old Woman” (1956), and “The Woman Who Wanted to Live” (1962).  In 1958 Bronson appeared as Butch Cassidy on the TV western Tales of Wells Fargo in the episode titled “Butch Cassidy”.

He was cast in leading man roles  in some low budget films, notable “Machine-Gun Kelly” (1958), “A Biopic of a Real Life Gangster” directed by Roger Corman. He also starred in Gang Work (1958), When Hell Broke Loose (1958), and Show Down at Boot Hill (1959),  On television the played Steve Ogrodowski, a naval intelligence officer, in two episodes of the CBS military sitcom/drama, Hennesey starring Jackie Cooper, and he played Rogue Donovan, an escaped murdered In Yancy Derringer (episode:  “Hell and High Water”) .  Bronson starred alongside Eliza Beth Montgomery in a Twilight Zone episode (“Two”, 1961).  He appeared in five episodes of Richard Boone’s Have Gun—Will Travel (1957-63).  He appeared in “zigzag” of Riverboat, starring Daren Mc Gavin.  In 1960 he appeared as Frank Buckley in the TV western Laramie in the episode titled “Street of Hate”.

He Became a Leading Support Actor

As a leading support actor in Hollywood (1960-1968), Bronson was cast in the romantic lead of Master of the World (1961) supporting Vincent Price.  In 1961 Bronson was nominated for an Emmy Award for his supporting role in an episode entitled “Memory in White” of CBS’s General Electric Theater, hosted by Ronald Reagan. In 1962 he appeared alongside Elvis Presley in Kid Galahad.  Sturges cast Bronson for another Hollywood production, The Great Escape (1963), as a claustrophobic Polish prisoner of war, flight lieutenant Danny Velinski, nicknamed “The Tunnel King”.  Bronson really was claustrophobic, because of his childhood work in a coal mine.  The film was a huge hit and Bronson had one of the leads.  He had an excellent role in the Dirty Dozen (1967), where he played an army death row convict conscripted into a suicide mission.  It was a massive box office success, but Bronson was only the third lead.  He seemed unable  to make the transition to star of major studio films in Hollywood.  In Villa Rides (1965) he supported Robert Mitchum and Yul Brynner, playing the real-life Rodolfo Fierro.

Bronson made a serious name for himself in European films.  He was making Villa Rides when approached by the producers of the French film  Adieu l’ami, who was  looking for an American co-star for  Alain Delon. Bronson’s agent , Paul Kohner later recalled the producer pitched the actor  “on the fact that in the American film industry all the money, all the publicity, goes to the pretty boy hero types.  In Europe the public is attracted buy character, not face.  The film was a big success in Europe; even more popular was “Once Upon a Time in the West” (1968) where Bronson played harmonica.  The director, Sergio Leone, once called him ”the greatest actor I ever worked with”, and had wanted to cast Bronson for the lead in 1964’s  A Fistful of Dollars.  Bronson turned him  down and the role launched Clint Eastwood to film stardom.  The film was the biggest hit of 1969 in France.  Bronson appeared in a French action film, “Guns for San Sebastian” (1968), alongside Anthony Quinn.  In Britain he was cast in the lead of “Lola” (1969), playing a middle-aged man in love with a 16 year old girl.  He then made a buddy comedy with Tony Curtis in Turkey, “You Can’t Win Them All” (1970).  Bronson then played the lead in a French thriller, “Rider on the Rain” (1970) , which was a big hit in France.  It won a Hollywood Golden Globe Award for best Foreign Language film. Bronson starred in some French-Italian action films, “Violent City” (1970) and “Cold Sweat” (1970), the later directed by Terence Young.  He was in a French thriller, “Someone Behind the Door” (1971) alongside Anthony Perkins.  Then he starred in another directed by Young, the French-Spanish-Italian western “Red Sun” (1971).  The Valachi Papers (1972) was a third picture with Young; Bronson played Joseph Valachi.  That year his overseas fame earned him a special Golden Glove Henrietta Award for “world film favorite—male” together with Sean Connery.

Charles Bronson was named the Number 1 international box office attraction outside of Hollywood by the Hollywood Foreign Press Association (1972).  He also won a Golden Globe for being the world’s most famous actor.

Charles Bronson’s first wife was Harriet Tendler (married in 1949-divorced in 1965).  After their divorce he married Jill Ireland in 1968.  She died of breast cancer in 1990, and in 1998, he married Kim Weeks.  Charles Bronson died on  August 30, 2003 in Los Angeles at the age of 81.  He had been suffering from pneumonia. Bronson was an American actor best known for his “macho” image, who starred in such classic films as ”Once Upon a Time in the West”, “The Magnificent Seven”, “The Dirty Dozen”, “The Great Escape”, “The Evil that Men Do”, and the popular “Death Wish” series. He was a great man with a great heart.  As a young coal miner, he earned $1 (One dollar) per ton of coal.  His family was so poor, that at one time, he reportedly had to wear his sister’s dress to school, because he had nothing else to wear.  As a kid, he was described as a loner.  He used to spend most of his time alone, walking in the woods.  He went to work in the coal mines like his older brother until he entered military service during World War II.  He was the only one in his family  to earn a high school education.  He was the world’s number 1 box office attraction, commanding $1 million per film. During his career he appeared in over 60 films.  Bronson was active in raising funds for the John Wayne Cancer Institute.  Some of his awards include a Golden Globe in 1972; a Gold Star Award as the industry’s number one international star (1979); and a star on the Hollywood Walk of Fame.  He truly was a great man of deep compassion and love. This is truly a rags to riches story—what a man!