Attorney General James to Deliver Up to $17.5 Million to Mohawk Valley to Combat Opioid Crisis 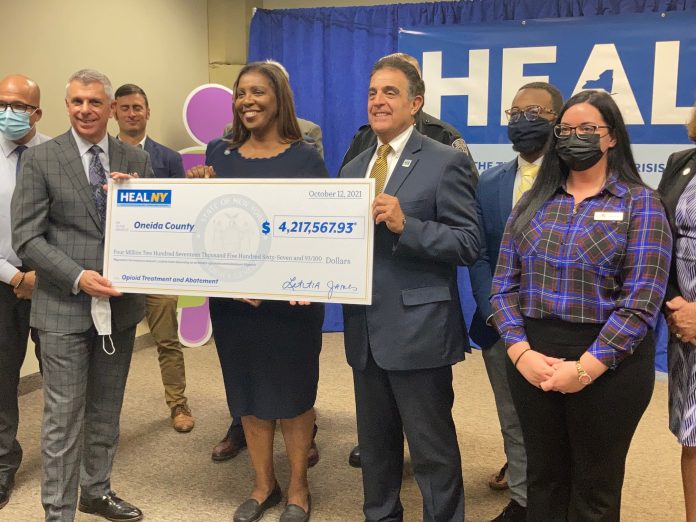 NEW YORK – New York Attorney General Letitia James today continued her statewide ‘HealNY’ tour of New York state with a stop in Utica, where she announced that she will deliver up to $17.5 million to the Mohawk Valley to combat the opioid epidemic. The funds come from different settlements Attorney General James has negotiated following her March 2019 lawsuit against the various manufacturers and distributors responsible for the opioid crisis. Attorney General James’ tour will make stops in dozens of New York counties throughout the month of October, with up to $1.5 billion in funds going to counties across New York state.

“Over the last two decades, the Mohawk Valley has not been spared from the pain and devastation the opioid crisis has inflicted on our state, but, today, we are beginning to heal New York by announcing that we will be delivering up to $17.5 million into the Mohawk Valley to invest in prevention, treatment, and recovery programs,” said Attorney General James. “With these funds, I know we can turn the tide on the opioid crisis and help communities rebuild. While no amount of money will ever bring back all that we have lost to this epidemic, we can hold the various manufacturers and distributors responsible and invest these funds in preventing any future destruction.”

Attorney General James announces that she will deliver millions of dollars to Oneida County and
other counties in the Mohawk Valley to help local residents recover from the opioid epidemic.

Last month, a settlement with Endo was announced that has already delivered $50 million to New York state and Nassau and Suffolk counties to combat the opioid crisis and remove the opioid manufacturer from New York’s ongoing opioid trial.

Also, last month, a settlement that secured more than $4.5 billion — at least $200 million of which will be earmarked for New York — from the Sackler family and foundations that they control, ends the Sacklers’ ability to manufacture opioids ever again, and will shut down Purdue Pharma was announced.

In July, a settlement with McKesson, Cardinal Health, and Amerisource Bergen that will deliver up to $1 billion to New York state to combat the opioid epidemic was announced.

In June, a settlement that ended Johnson & Johnson’s sale of opioids nationwide and that will deliver $230 million to New York alone was announced. The deals with Johnson & Johnson, McKesson, Cardinal Health, and Amerisource Bergen have a global value of approximately $26 billion.

The cases against Mallinckrodt and Rochester Drug Cooperative are now moving separately through U.S. Bankruptcy Court.

The trial against the two remaining defendants — Teva Pharmaceuticals USA and Allergan Finance — is currently underway and continues in state court.

Every region in the state will receive millions of dollars for prevention, treatment, and recovery programs to combat the opioid crisis.

The figures listed below represent the minimum and maximum amounts each county can receive from the settlements with Johnson & Johnson, McKesson, Cardinal Health, Amerisource Bergen, and Endo. The more localities across the state that agree to the terms of these different settlements, the more each locality is eligible to receive. The figures below do not include payments from Purdue Pharma or the Sackler family, as the regional split for those payments are still being finalized. Those funds, as well as any funds from future or ongoing litigation, would be in addition to what is listed below.

* In addition to sum total of counties, a regional share is also being allocated here. 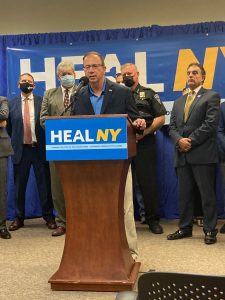 “We must continue to confront the opioid epidemic in New York state,” said State Senator Joe Griffo. “It is important that communities and local governments have access to the resources they need to effectively address this issue, and thanks to Attorney General James we will have the funds necessary to turn the tide on the opioid crisis.” 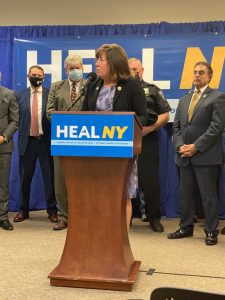 “As a nation we are facing an opioid epidemic and the Mohawk Valley is not immune to the devastation that this epidemic has caused our families, our neighborhoods, and our places of work,” said State Assemblymember Marianne Buttenschon. “I want to thank Attorney General James for holding our drug manufacturers and distributors accountable and securing the much-needed funding to combat this crisis.”

“The devastation that opioids have inflicted on Oneida County and communities throughout New York state and across this nation is a monumental tragedy,” said Oneida County Executive Anthony J. Picente Jr. “We combat this crisis each and every day through our Opioid Task Force, utilizing strong partnerships to provide treatment and prevention services and outreach on all levels. This settlement funding secured by Attorney General James will be a huge support to those efforts, and I thank her for holding those responsible accountable and delivering some manor of justice for the countless families who have been impacted by this horrible epidemic.” 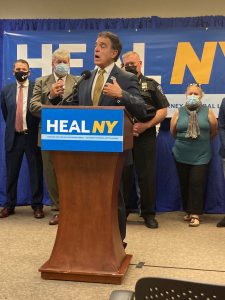 “The opioid epidemic has impacted individuals and families in our community,” said Utica Mayor Rob Palmieri. “In order to combat this crisis, all levels of government need to work collaboratively. I commend Attorney General James for her proactive leadership on this important issue.”

“The recognition that the opioid crisis is rooted in the need for community repair is essential,” said Utica Common Council President Michael Galime. “This problem was caused by negligence and brazen disregard for the human condition. It is my hope these monies will assist our local governments, working together, in healing those that need it most. I thank Attorney General James for continuing to fight for Utica’s most vulnerable.”

“Center for Family Life is grateful for the insight and persistence of New York Attorney General James for securing such an amazing amount of resources to help our communities combat the opioid crisis and for continuing to make recovery even more possible for so many people,” said Cassandra Sheets, CEO, Center for Family Life and Recovery.

Separately, but related to her work on opioids, this past February, Attorney General James co-led a coalition of nearly every attorney general in the nation in delivering more than $573 million — more than $32 million of which was earmarked for New York state — toward opioid treatment and abatement in an agreement and consent judgment with McKinsey & Company.