A History of Hospitals In Utica 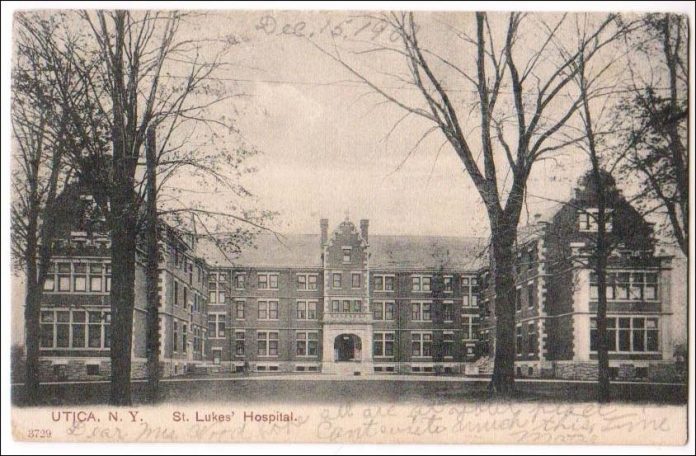 How do hospitals get built? Who decides where they locate their facilities? And, who should pay for these facilities and the equipment necessary to provide quality healthcare for the residents of the community served?

In Utica NY, a debate rages on about a proposal to locate a new hospital downtown, displacing businesses and residents with a long and storied history of being located downtown. Businesses like Urbanik’s Paint, Metzler Printing, and The Compassion Coalition are but a few of the 38 businesses threatened by the downtown hospital concept.
How did we get here? Who made the decision to replace the three hospitals into one location downtown?

Historically, Utica was served over the years by several small hospitals scattered throughout the city. The original St. Elizabeth’s Hospital was located on Lafayette St. next to St. Joseph’s Church. It served the working class and predominately Catholic population of the west side of Utica. It was the first of private hospitals in Utica. Faxton Hospital was built through the generosity of Hon. Theodore S. Faxton on Sunset Ave in 1874. It operated in the original buildings until 1941, when a new structure was constructed.

In East Utica, General Hospital was located on South and Mohawk St. and was designed to care for the predominately immigrant population. It was paid for by the generosity of the wealthy patrons of the local hospital system through the Charity Commission.
At the turn of the 20th century, the booming population of the city strained the small hospitals serving it. Mr. and Mrs. Fredrick Proctor financed the construction of the St. Luke’s Home and Hospital on Whitesboro St., which started in 1869. The Proctors continued to support the operation and expansion of the hospital until their death.

Utica Memorial Hospital, originally Utica Homeopathic Hospital was opened in 1895 in the Butterfield Home on Genesee St., later replaced by a new building and nursing home in 1916. These were financed by Morton Burghart Combs and other loyal friends of the hospital.

In the years after WWII, the local churches and business community felt that the hospitals of Utica were outdated and decided to build St. Luke’s Memorial Hospital on Champlin Ave. Dedicated in 1957 it was a state of the art hospital financed by private citizens, churches, and charity not government tax dollars.

Therefore, the historical evolution of hospital placement, financing, and construction was dictated by private contributions and the citizens of the city as was the final decisions regarding them. Local government assistance was minimal.

Today, we are witnessing the next stage in the evolution of healthcare in the city of Utica. The big difference is that local citizens have not had a chance to have their voices heard about the type of facility that is being planned or the placement within Downtown Utica.
Furthermore, the need to remove 38 businesses from the central business district to accommodate the new hospital has met with stiff opposition from the affected business and property owners.

Local elected officials deaf to the concerns of the community affected push on with the proposal. Opposition leaders are derided as “out of touch” troublemakers, not representing the community but seeking out an agenda of their own.

These elected officials and the agency planners that work for them (EDGE) have declared it a “Done Deal”, castigating the individuals who have given an oppositional voice through the “No Hospital Downtown” movement.

Some of the organizers of #NHD have cried foul and are willing to fight for what they believe is needed: a true public discourse on the location of and need for a new hospital. They believe that the process should be open and that much of the planning has been done in secret for too long.

A hospital is an asset that every community wants to showcase. The history of hospitals in the greater Utica metro region has always involved the input of the community they were intended to serve. Today, local and state government officials have tried to usurp this process and create in secret the future of healthcare in Utica. Local citizens have tried to reign in on this process and have their voices heard.

The question is, are you bureaucrats listening?

Facebook
Twitter
Previous article
Central New York Citizens in Action, Inc.
Next article
Build It At St. Luke’s Page-Community Foundation: Have You Really Turned Your Back on the Poor?