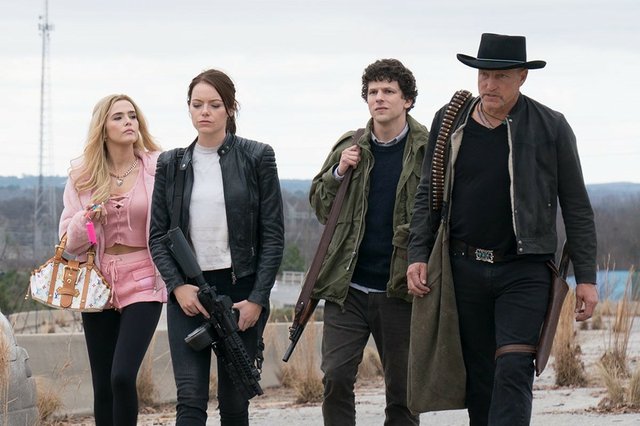 With comical opening narration by Jesse Eisenberg and a violent, over-the-top zombie massacre scored by Metallica’s “Master of Puppets,” Zombieland: Double Tap positions itself much the same way as its 2009 predecessor. This is a film, unlike zombie flicks like “World War Z” and “Day of the Dead” that, while celebrating carnage and gratuitous gore, packs a wholly family vibe, and plays as a PG-13 film, though it is rated ‘R.’ Director Ruben Fleischer returns from the original and is able to duplicate the humor, surfeit of tongue-in-cheek gore, and camaraderie of the original cast – all who return for this romp. With some additional characters added and only a bit of a lagging pace, “Zombieland: Double Tap” succeeds at being a humorous and honestly worthy sequel.

What separates “Double Tap” from its predecessor is its departure from the coming of age story of its motley crew (Columbus, Tallahassee, Wichita, and Little Rock), moving away from a formula that focused heavily on zombies to tell its story. We have a group that is well established and, like most families, they have their problems. Tallahassee is still as misanthropic as ever, questing to go out on his own while feeling obliged to watch over the gaggle of the young people he’s becoming intertwined with. Wichita and Columbus are working to make sense of their romantic entanglement, grappling with the issue of deepening their connection while wondering if their bond is real, or just the result of circumstance. Little Rock is struggling with demons of her own; she wants to meet a guy and start a family. Thinking this impossible (because the world is run by zombies), Little Rock resigns herself to depression and takes off to find herself.
Of course, “Double Tap” has other surprises. The movie introduces us to a host of human characters, such as a hippie/pacifist named Berkley, and a rough and tough survivor named Nevada – who is hiding out in Graceland (Elvis Presley’s estate). Berkley is played by Alan Jogia and Nevada is played by Rosario Dawson. They both add to the film in needed ways. Additional players, such as Luke Wilson and Thomas Middleditch, add humorous layers to a sequel that had to add more actors to make it work. However, rather than drag the film down, the additions – sometimes hit or miss – help to cement the humor of the film and highlight the unbreakable camaraderie held by the original four castmates.

The cast does a good job here, and you can tell they really enjoy play ing these characters. Harrelson is at home, and it shows. With this Zombieland and his turn as a sarcastic high school teacher in The Edge of Seventeen, Harrelson shows an actor comfortable with serious material as well as roles that force him to poke fun at himself.

Eisenberg is great also, appearing wiser but still somewhat naive and trepidatious. This role is quite the departure from his sarcastic and irreverent performance as Mark Zuckerberg in “The Social Network.” Stone and Breslin, likewise, follow suit. If criticisms do come, it’s evident that Stone and Breslin aren’t given the depth of some of the other male characters. Breslin, in particular, is pushed to act a certain way, required by the plot, without adding a lot of depth for her to work with. She does the best she can with the material.

Zombieland: Double Tap, make no mistake, is predictable as ever; But somehow, despite that, the film endears itself to its audience. We know there will be a lot of dead zombies, and the film delivers. Additionally, we know there will be family bonding and strife between the four main characters. Some of the scenes are funny, some are contrived, but overall they work.

The film takes some crazy turns, including a road trip to Babylon – a hippie commune where pot is rampant but weapons are banned – but it works. The ending of the film, which threatens to be over the top and cliché, instead is fun, uber-violent, and wholly lovable.
Double Tap recycles what worked in the first film and adds some new elements, managing to be just as entertaining as its initiation 10 years ago.

And make sure to stick around after the credits; as funny as Double Tap is, the post-credit clip is worth the price of admission alone.

Facebook
Twitter
Previous articleClimate Emergency: What would it mean to Act Responsibly?
Next articleBook Review: ‘Dusk on Route 1’