Broadway Utica
HomeMust ReadClimate Emergency: What would it mean to Act Responsibly?
Must Read

Climate Emergency: What would it mean to Act Responsibly? 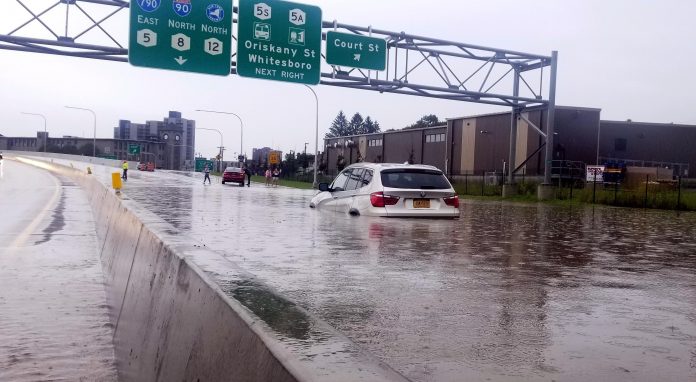 I feel scared. I am constantly reviewing new information about the climate emergency because I need to understand the scope of the emergency. Maybe you feel the same way.

I feel desperate. I am now acting in ways I never could have imagined; I can no longer stand by when it’s clear we all need to stand up.

My need for a safe environment is going unmet. Your needs are going unmet too. Our planet is becoming uninhabitable for humans and wildlife alike.

What is some of the information we have about the climate emergency?

This past week, over 11,000 scientists from 153 countries declared, in a joint statement published in the journal BioScience, “planet Earth is facing a climate emergency” and “the climate crisis is closely linked to excessive consumption of the wealthy lifestyle.”

To some, this might seem distant or abstract, a problem occurring somewhere else. But it’s happening on our planet, in our country, and in our county — and it’s happening now. The climate emergency knows no boundaries. The struggles we see abroad are a harbinger of the challenges we’ll face here.

In Syria, drought aggravated by climate change escalated instability that resulted in civil war and mass migration. The Maldives are drowning due to rising sea levels.

In California, fires exacerbated by climate change are forcing people to flee their homes and live without power. Family, friends, and neighbors are quick to dismiss or ignore the nearness and the science. But the reality is, we’re already experiencing the effects of climate change in our own country, even in our own county.

Locally, flooding intensified by climate change is washing away precious topsoil and costing taxpayers countless dollars in repairs. Local officials are describing it accurately, except for calling it what it is—a climate emergency:

“On Halloween, Oneida County and many neighboring counties suffered devastating flooding. The amount of rain arrived faster and in a much shorter time than in previous flood and weather events. The damage is extensive and people are out of their homes.”

It’s also clear that local legislators have failed to recognize the severity and extent of the emergency.

If it’s not obvious, everything is wrong with growing oranges in Central New York. If we entertain that thought, we would quickly realize that our climate would have to become similar to orange-producing states like Florida. But New York and Florida experience about a 40-degree Fahrenheit difference in extreme minimum temperatures (hardiness zone 5 vs. 9).

What would become of Florida’s climate and the lives of anyone living there if it meant their climate was affected somewhat similarly to New York’s climate? Other parts of the U.S. would be experiencing desertification, crop failure, water shortages, and mass migration. In other words — societal collapse.

Hopefully the importance of mitigating and adapting to this climate emergency are clear. Climate change is a life or death matter, but calls for action are going unanswered.

Yes, some local governments have adopted resolutions that are
“green,” and some individuals are making more planet-conscious choices, but they amount to too little, too late.

LED streetlights, EV charging stations, and solar panels are capitalist solutions that distract us from the necessary fundamental changes we’ll need as we work to adapt to and mitigate the effects of our climate emergency.

We find ourselves in a double bind where any choice in the capitalist economy has deleterious effects on our planet.

“Green” infrastructure solutions inherently contribute vast amounts of carbon emissions during the extraction of the materials and production of the products while purporting to be “eco-friendly.”

To be clear, the problem is not with individuals, it’s how we are forced to interact socially within a capitalist system. It will be important to hear all voices as we determine the shape of the fundamental changes that we must make to ensure our survival.

I think it’s abundantly clear that the symptoms of our problem are at our doorsteps, seeping into our basements, and washing away our fields. By acting now we have a chance to reduce harm and save what we can.So what would it mean to act responsibly?

This is a problem that can’t be solved by individual action. The problem continues to persist at a systemic level. Luckily, there are motivated groups of people working on solutions to this question.
Extinction Rebellion is one such group working collectively to influence action on the climate emergency.

Extinction Rebellion has four demands:
We demand that governments and media must tell the truth about our climate and ecological emergency because we’re facing an existential threat. But no one is calling it that.

It’s clear that the consequences of business as usual will be devastating, so we demand that governments must act now to halt biodiversity loss and reduce greenhouse gases to net zero by 2025.

Governments must also create and be led by citizen assemblies because legislation thus far has been ineffective and partisan.
Lastly, we demand a just transition that must prioritize marginalized communities.

On December 3rd, at 7 p.m., Extinction Rebellion is coming to Utica at The Other Side, 2011 Genesee Street, to share a talk titled “Heading for Extinction.” In this talk, climate speakers from Extinction Rebellion will share the latest climate science on where our planet is heading, discuss some of the current psychology around climate change, and offer solutions through the study of social movements.

By coming to this talk, you’ll have an opportunity to join a group of people interested in saving our planet from destruction. Join us and bring a friend!

On December 6th, at noon, members of Extinction Rebellion Mohawk Valley, Sunrise Hamilton College, Citizen Action of New York, and Indivisible Mohawk Valley, as well as members of the greater Utica community, will be participating in the Utica Climate Strike at the intersection of Genesee Street and Memorial Parkway.

By coming to this strike, you’ll have an opportunity to show solidarity and raise awareness about our climate emergency. Join us and bring a friend!