Which women’s college basketball recruits took their games to new 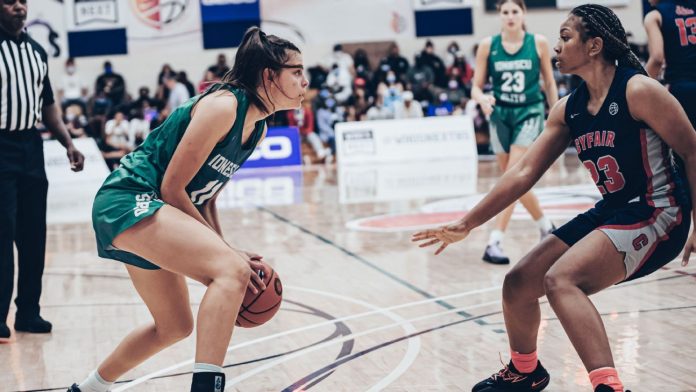 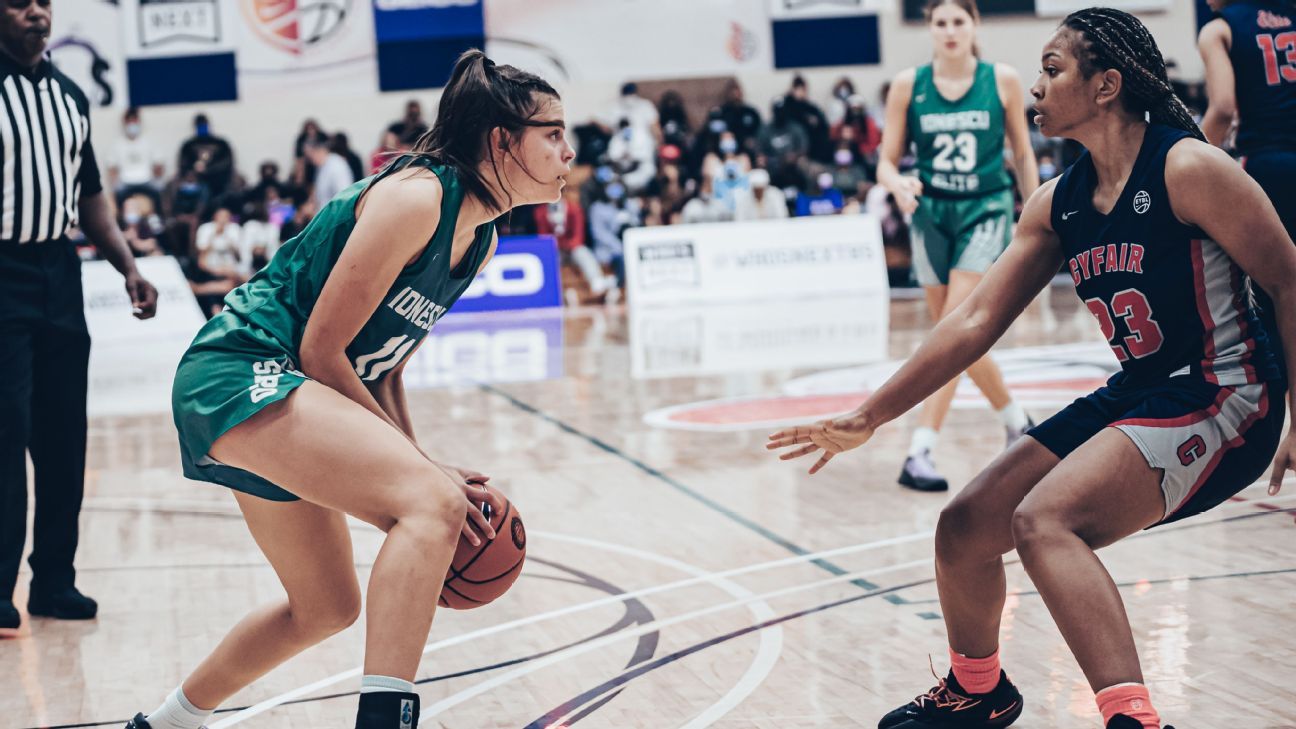 We updated our women’s college basketball recruiting rankings for the Classes of 2022, 2023 and 2024 coming off a full summer of live period recruiting events that featured several major circuits and event championships.

Being able to scout college prospects in person again made it possible to witness firsthand the players who raised their skill level, performance and recruiting stock over the past several months.

Recruiting never stops, and players are constantly working and competing for coveted opportunities at the next level. Here are the prospects in the Classes of 2022, 2023 and 2024 who took their games to the next level.

Jaquez is a well-rounded and gritty competitor who does not back down against opponents. Her ability to attack and score from the high post and go one-on-one from the wing helped her to get on the radar early. She has added a consistent 3-point shot, which has made a huge difference in her game.

She helped lead her Cal Stars squad to the Nike EYBL Championship in July, garnering MVP honors with her proficient defense, relentless rebounding and her overall versatility. She made winning play after winning play and was able to fill any hole that coach Kelly Sopak’s team needed.

The 6-foot Jaquez committed to play at UCLA on July 30. Her older brother, Jaime, is a forward on the UCLA men’s basketball team.

Nivar created quite the buzz among college coaches this summer. After not being able to watch live high school basketball for over a year, Division I coaches benefitted from finally being able to return to the packed baselines and sidelines to view players again. Nivar took that opportunity to prove that she had added to her game and earn several scholarship offers.

The 5-foot-9 Nivar has a naturally strong build and leaping ability, and demonstrates this as she glides to finishes at the rim or takes contact on powerful finishes off of two feet against bigger defenders. Her pull-up jump shot is fundamentally sound and she is a catch-and-shoot 3-point threat as well. Nivar has a solid handle and uses her footwork and angles to get to her spots.

Defensively, her lateral speed and quickness allow her to guard multiple positions on the perimeter. As mentioned, her jumping ability helps her efforts to rebound and quickly start the transition break.

Johnson has immense scoring talent thanks to her flair and style on the court. But she rose her game by focusing on the defensive end. She began to lock in and get down in a fundamental defensive stance and be aware of the off-ball nuances.

This allowed her to take her natural instincts for the ball and turn them into disruptive plays on defense. She can pressure the ball and also be a problem in the passing lane with her quick hands and anticipation — which sometimes can lead to a bit of gambling for steals, but that is sometimes part of playmaking.

Offensively, she can create off the dribble with her handle and is adept at the pull-up jumper. She is a streaky 3-point shooter but can truly catch fire from deep. Her left hand could still use a little sharpening, though it has improved. Where once she was most engaged only when the ball was in her hands, she is now reading pin-downs and staggered screens well.

She has taken an official visit to Miami while Georgia, LSU, Texas and Ole Miss are also on her radar.

Post player Ciera Toomey went from being the No. 14 prospect in the Class of 2023 to being ranked No. 3. Brittany Graham

Toomey already had college coaches heavily anticipating the chance to evaluate her live once her high school films caught their attention, and after dominating at The Prime Event-East in June.

Though she debuted at No. 14 in the rankings in late April, she left no doubt she was the ultimate stock riser of the summer. Toomey has a smooth game: footwork, high release, sweet mid-range jumper, high-percentage 3-ball, and has shown she is comfortable anywhere on the floor with her passing prowess and competent ball-handling skills. She demonstrated that by scoring 17 points against No. 1 overall prospect Mikaylah Williams in the first half in the finals of the Premier Basketball Super 64.

Defensively, she times the shot-block incredibly well. She does a great job of being patient enough for her opponent to leave the floor before she does, maintaining verticality, and blocking and challenging shots in and around the paint. As a secondary defender, she knows just when to rotate and create havoc in order to make scoring difficult.

Toomey, a multi-sport athlete who also excels at golf, can become a prototypical stretch-4 player as she adds strength and tightens up the change of direction in her handle. UConn, Notre Dame, Penn State, Maryland, North Carolina, Wisconsin and Baylor are among the numerous teams pursuing her.

There was a lot of buzz surrounding Prosper once July began, and the 6-foot-2 Canadian wasted little time showing off her talents.

She is a smooth athlete whose length and coordination stand out even in warmups. She is an exceptional jumper and leaper who finds ways to get to the ball on rebounds or slip through gaps in the defense to the rim. Currently more of a forward than a wing with her slashing style of play, she prefers to put the ball on the floor to attack the paint offensively than catch and shoot. She is a solid shooter from the mid-range, and adding a more consistent 3-point shot can only help her game.

As she has more chances to compete against high-level players like she did all summer, whether it was club basketball or with her U16 Canadian national team, she will learn the physical habits defensively and find her niche as a forward/wing as well. She is so physically gifted that she needs those comparable talents to challenge her. In the FIBA Americas U16 final against the USA on Aug. 30, she held her own, scoring 13 points and pulling down five rebounds.

Prosper has vast potential and has garnered scholarship offers from teams in all the major conferences in women’s college basketball.

Hidalgo is among the most competitive players in her class. Though she was snubbed from a USA U16 invite, she used her chance to play in front of college coaches and scouts to show off her array of floater and runner finishes. She can elevate and explode to the rim after she breaks down defenses with her footwork and exceptional handles. She also has the ability to knock down pull-up jumpers, and her 3-ball has range as well.

She is quick with or without the ball. Defensively, she is disruptive both on the ball and in passing lanes. This allows her to set the competitive tone for her team and control the pace of the game — which, right now, she likes to be fast.

As her game matures and she manages her team as well in the half court as she does in transition, expect her stock to rise even more. She is working diligently on being more consistent from beyond the arc and improving her overall strength. Notre Dame, Louisville, Maryland, Penn State, Pitt, Arizona, Mississippi State, Boston College and Stanford are some of the schools actively recruiting Hidalgo.

Cambridge had one of the most complete and winningest summers in recent memory. Not only did her FBC United The Family team win the Under Armour Championships, but she also was part of the USA U16 FIBA Americas team that won gold in Mexico, where she contributed 18 points and three assists in the gold-medal game vs. Canada.

Cambridge is energetic and competes with a confidence that is hard to match. She is constantly engaged and makes dynamic plays on the court. Her ballhandling skills help her break down her defender, which allows her to create for herself, or get defenses scrambling and rotating, which creates opportunities for her teammates.

She can shoot it from deep, reads the floor very well and is electric in transition. At 5-foot-6, her 3-point ability is key to keeping defenses honest and having opponents keep up with her. Defensively, she pressures the ball handler as well as anyone in the country. She is very effective in presses and help-side, as her quickness, speed and anticipation are well above average.

Cambridge came off a late high school season elbow injury and that kept her away from training and playing for some time, and her newfound focus and maturity upon her return led to a fantastic summer. Oregon, Texas, North Carolina, UCLA and Michigan are among the schools who are looking at Cambridge.

Like UConn star Paige Bueckers (from Minnesota) and Iowa star Caitlin Clark (from Iowa) before her, 2024 wing Allie Ziebell (from Wisconsin) is the latest premier shooter from the Midwest. Brittany Graham

Ziebell can flat-out shoot the basketball. She regularly hit five, six or seven 3-pointers in a game — and in big moments, no less. At The Prime Event 16U Championship, she hit back-to-back 3s and scored 11 of 14 points to break a tie game, as her team never looked back. She is certainly in the conversation as the best shooting prospect in the country. Like UConn star Paige Bueckers (from Minnesota) and Iowa star Caitlin Clark (from Iowa) before her, Ziebell is the latest premier shooter from the Midwest.

Ziebell uses the shot fake well, can put the ball on the deck and hit the pull-up jumper. She keeps the game simple and knows her strengths. She has a quiet poise about her that sets the tone for her team. She understands the game and makes few mistakes. Defensively, she knows how to use angles to keep the ball in front of her versus other guards that may be a bit quicker. She does a great job staying down in a stance and being aware off the ball, which helps her always be in the correct position.

Peterson has steadily gotten more comfortable, and in turn more aggressive, over the summer. In the spring, she showed the flashes of the skills, but not as much assertiveness. The past few months, her game has really taken shape.

The 6-foot-3 Peterson is versatile and can shoot the ball out to the 3-point line with a natural, easy stroke. She is a good decision maker and solid ball handler when she is asked to break a press or move the ball in the half court. Even though she has the “stretch 4” type of game developing, she has good back-to-basket moves and awareness. Her passing and court vision really help her stand out.

Defensively, her length and mobility allow her to block and alter shots. She moves well laterally, so she can guard out to the perimeter when needed. She will become more of a force inside the stronger she gets. Peterson currently holds offers from Arizona, Cal, Illinois, Ohio State and Utah, among Power 5 and Ivy League schools.