Which team will win the women’s NCAA title? Final Four 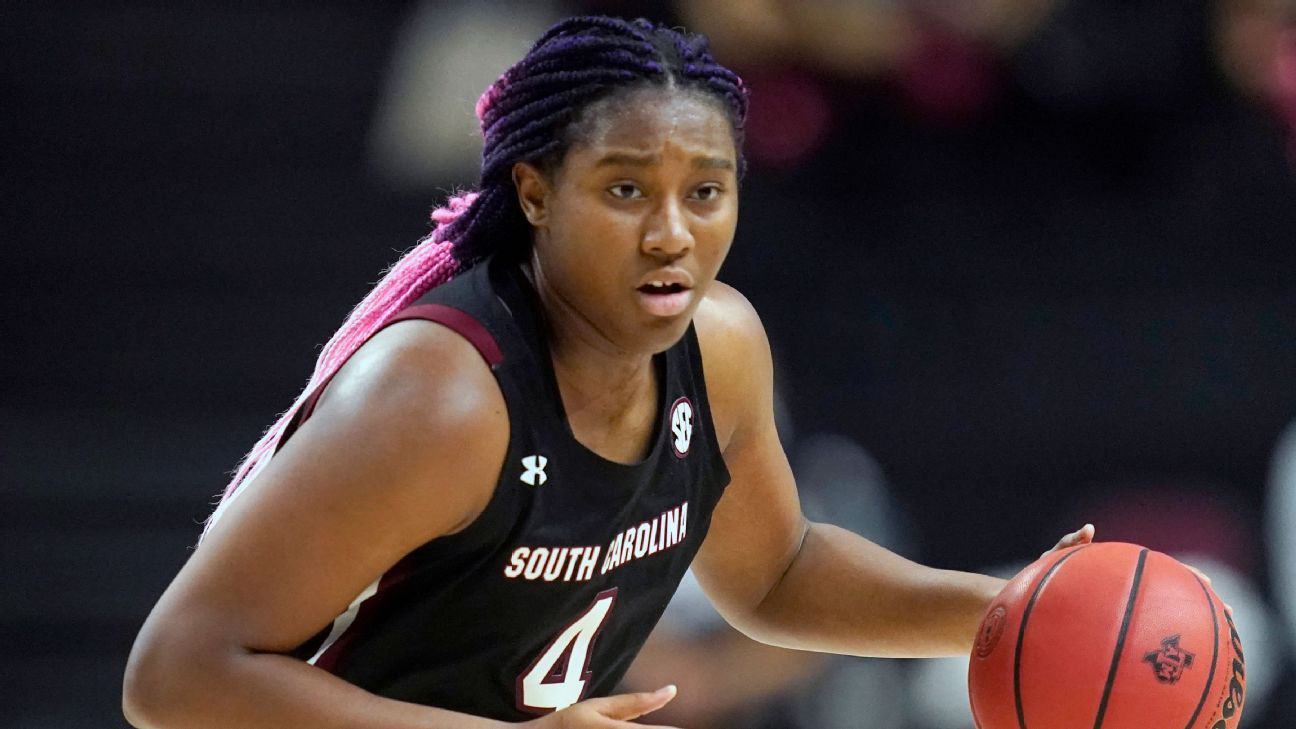 The 2021-22 women’s college basketball season tips off Tuesday as the march to Minneapolis and the women’s Final Four begins.

South Carolina, which is No. 1 in the AP Top 25 preseason poll, and UConn, which topped ESPN’s ranking of the 25 best teams in the country, are back among the favorites seven months after both lost in the national semifinals.

What are the expectations for defending NCAA champion Stanford? And what’s next for Baylor, in its first season without Kim Mulkey in 21 years?

With the new season nearly upon us, our panel — ESPN writers Katie Barnes, Charlie Creme and Mechelle Voepel, and The Undefeated’s Sean Hurd — dissects some of the biggest storylines and top players and teams we’re watching in 2021-22, and makes its predictions for the Final Four and more.

The Gamecocks and Huskies are unanimous picks to reach Minneapolis in April. But the voters are split on who will take home top honors as the national player of the year.

Jump to Final Four and player of the year predictions

What player are you most looking forward to seeing play, whether it’s a returner, a highly touted recruit making her college debut or a transfer?

Creme: We have been hearing about Azzi Fudd for over two years. Whether it’s her skills as a shooter, her demeanor in big moments or the efficiency with which she plays, Fudd enters her freshman season at UConn with a reputation as a future star. Now I want to see it all, game after game against and with the best talent Fudd has ever seen. That isn’t meant to sound skeptical, but rather eager. Greatness is fun to watch. If she is truly great, it’s time to enjoy it.

Other curiosities await when Fudd steps on the floor for the first time. How does she fit into a loaded UConn lineup? How much will the chemistry she already has with good friend Paige Bueckers help the Huskies? Will Fudd have the same impact that Bueckers did as a freshman? Is she the missing piece to help UConn win its first national championship since 2016? The answers will emerge in time, but these questions should consistently remain one of the top storylines of the season.

Barnes: Charlie is out here stealing my (not so original) ideas! I’m also excited to see how Fudd will adjust to the college game, but lucky for us, there is no shortage of talent in women’s basketball right now. So my official pick is Stanford’s Haley Jones.

Jones was named the Most Outstanding Player at last season’s Final Four, and really started to demonstrate her versatility and leadership. She was the top-ranked recruit coming out of high school, but has battled a couple of injuries to start her collegiate career. Much of Stanford’s core is returning — the exception of course is last year’s leading scorer Kiana Williams. Jones could step in as both a scorer and facilitator. I think Jones is poised to have a true breakout season and challenge for end-of-season awards. If she performs at the level she did during last season’s tournament, look out!

Voepel: Baylor’s NaLyssa Smith is looking to expand her shooting range and become a more effective passer along with all the things she already does well. She has had a lot of conversations with new coach Nicki Collen about what she needs to do to prepare for this season and for being a lottery pick in the 2022 WNBA draft. Smith has already proven she’s one of the best players in the country, but she’s out to prove it even more this season.

South Carolina’s Aliyah Boston is another player who is out to show she has more versatility. From an individual standpoint, I’m really eager to see both Smith and Boston get to work.

What team are you most looking forward to seeing play?

Jakia Brown-Turner and NC State, a No. 1 seed in the 2021 NCAA tournament, get a big test early on: vs. No. 1 South Carolina on Tuesday. AP Photo/Eric Gay

Creme: Baylor is the quintessential “what happens next” scenario. Rarely does a coaching change of this magnitude happen without a retirement taking place. So the Nicki Collen-led Baylor Bears vs. the Kim Mulkey-coached edition should be fascinating. I can’t wait to see how much different Baylor looks. The word is that Collen’s more pro-like approach will mean more 3-point shooting and a faster pace. Smith is one of the best players in the country in any system, but if her physical skills get even more space in which to operate, the entertainment value could be immeasurable.

If Baylor does play differently, will it translate into the same success as the program had under Mulkey? The Bears have owned the Big 12, losing just nine conference games in the past 11 seasons. Mulkey’s formula worked as well as anything the sport has ever seen. Collen has much to live up to, but with Smith and Queen Egbo back in the post and transfers Jordan Lewis and Ja’Mee Asberry taking over the backcourt, she has a talented foundation.

Barnes: I’m really intrigued by UConn this year. The Huskies return their entire team from last year’s Final Four run, added the second-ranked recruiting class and landed a monster transfer in two-time All-Big Ten player Dorka Juhász. This is a UConn team with a level of depth that coach Geno Auriemma admits hasn’t existed in many years. How UConn will utilize that depth is what’s interesting to me. All through the summer and fall, the word out of Storrs was that this group is competitive. Practices were hard. Pickup games were hard. Everyone was dishing it out.

Minutes are not going to be easy to come by and how those minutes will be divided is really interesting to me on a team that historically played seven or eight players. Will Auriemma change the starting lineup depending on the match up? Will Fudd start? Will this team that is super competitive with each other in practice develop enough chemistry to end the program’s championship drought? I have so many questions, and they can only be answered on the hardwood.

Cameron Brink and Stanford have nearly their entire roster back as the Cardinal look to repeat as NCAA champions. Carmen Mandato/Getty Images

Voepel: NC State wasn’t able to live up to its No. 1 seed last season, falling in the Sweet 16. There is so much returning experience with this team, both with their guards and on the inside with center Elissa Cunane. Adding sophomore transfers Diamond Johnson from Rutgers and Madison Hayes from Mississippi State will make the Wolfpack an even deeper team.

NC State under coach Wes Moore has been knocking on the door of getting to a Final Four for a few years now. There are a ton of good teams this season, but maybe this is the year the Wolfpack do it again. Their only other Final Four appearance was in 1998 under the legendary Kay Yow.

Maryland also brings back so much from last season. The Terps at times were as fun a team to watch as any last season if you like offense. We should see more of the same this season.

Make one bold prediction for the coming season.

Creme: Remember back in 2013 when UConn and Notre Dame met four times? The Irish won the first three meetings, but in the biggest one of all — the national semifinals — the Huskies prevailed on their way to the first national championship in the Breanna Stewart era.

Something similar is going to happen this year. UConn and South Carolina, the consensus top two teams in most preseason rankings, will play three times. They will meet in the finals of the Battle 4 Atlantis tournament in the Bahamas just before Thanksgiving, and again in their scheduled matchup on Jan. 27 in Columbia. The Gamecocks will win both of those games.

Then on April 3 in Minneapolis, unbeaten South Carolina and two-loss UConn will play for the national title. Much like they did to Notre Dame nine years earlier, the Huskies exact their revenge at exactly the right moment and capture their 12th championship.

Voepel: Baylor will win the Big 12 regular-season title once again, even without Mulkey, but the Bears will stumble a few times on the way there. Texas, Iowa State and Oklahoma (under new coach Jennie Baranczyk) all will help make the Big 12 more intriguing than it has been in recent years — even though we know the Longhorns and Sooners will eventually be leaving for the SEC.

Similarly, Maryland will finish atop the Big Ten again, but not without some strong competition from the likes of Iowa, Indiana and Michigan.

Which teams reach the Final Four?

Which team wins the NCAA title?

Who will be the national player of the year?

Who will be newcomer of the year?