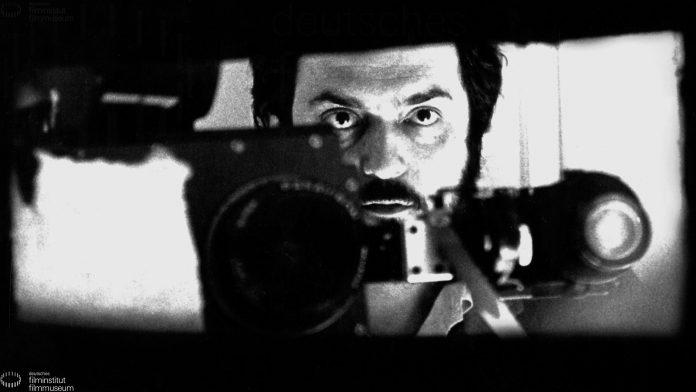 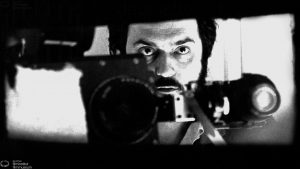 Stanley Kubrick was an American film director, screenwriter, producer, cinematographer, editor, and photographer.  He was an American filmmaker best known for directing Dr. Strangelove, Clockwork Orange, 2001: A Space Odyssey, The Shining, Full Metal Jacket, and Paths of Glory.  His films, which are mostly adaptations of novels or short stories, cover a wide range of genres and are noted for their realism, dark humor, unique cinematography, extensive set designs, and use of music.  He is frequently cited as one of the greatest and most influential directors in cinematic history.

Famed filmmaker, Stanley Kubrick, was born in New York City on July 26, 1928, and grew up in the Bronx, New York, where his father, Jack Kubrick, worked as a doctor and his mother, Sadie (Perveler) Kubrick, was a housewife.  He had a younger sister, Barbara.  Jack Kubrick’s parents and paternal grandparents were of Polish, Austrian, and Romanian origin.  Their religion was of the Jewish faith.  Kubrick did not have a religious upbringing and would later profess an atheistic view of the universe.  Kubrick attended William Howard Taft High School from 1941-1945.  Though he joined the school’s photographic club, which permitted him to photograph the school’s events in their magazine, he was an average student, with a 67-grade average.  He graduated in 1945, but with his poor grades, combined with the demand for college admission from soldiers returning from the Second World War, eliminated hope of higher education.  When Kubrick was 12, his father, Jack Kubrick, taught him chess.  The game remained a lifelong interest of Kubrick’s, appearing in many scenes of his films.  Kubrick, who later became a member of the United States Chess Federation, explained that chess helped him develop “patience and discipline” in making decisions.  At the age of 13, Kubrick’s father bought him a Graflex camera, opening a fascination with still photography. Kubrick played the drums in his high school’s jazz band.  Kubrick also displayed early promise as a photographer.  He worked on the school paper, and at the age of 16, began selling his photos to Look Magazine.  A year later, he was hired for the staff of the magazine.  When not traveling for Look, he spent most of his evenings at the Museum of Modern Art. Toward the end of his high school career, Kubrick applied to several colleges, but he was turned down for admission by all of them.

To Start Into Film Making

Kubrick shared a love of film with his school friend, Alexander Singer, who, after graduation from high school, had the intention of directing a film version of Homer’s The Iliad.  Through Singer, who worked in the offices of the Newsreel Production Company, Kubrick learned that it could cost $40,000 to make a proper short film, money he could not afford.  However, he had $1,500 in saving and managed to produce a few short documentaries fueled by encouragement from Singer.  He began learning all he could about filmmaking on his own, calling film suppliers, laboratories, and equipment rental houses.  Kubrick began to explore the art of filmmaking in the 1950s.  His first films were documentary shorts financed by friends and relatives.  His first feature, the 1953 military drama, Fear, and Desire, was made independently of a studio—an uncommon practice for the time.  Early into his filmmaking career,

Kubrick acted as cinematographer, editor, and sound man addition to the director.  Later he would also write and produce.  Kubrick was given a healthy budget ($850,000) by United Artist to shoot the antiwar drama Paths of Glory (1957) in West Germany.  Set during World War I, it focused on the suicidal attack by French troops on a German position and the repercussions in its aftermath.  Because of the condemning portrayal of the French Officer Corps, the film was not shown in France until 1975.  Kirk Douglas, Adolphe Menjou, and Ralph Meeker gave commanding performances.

Kubrick released his most popular film, 2001: A Space Odyssey, in 1968, after working diligently on the production for a number of years from co-writing the script with sci-fi writer, Arthur C. Clarke to working on the special effects, to 13 academy awards nominations; he won one for his special effects work.   While Odyssey was an enormous success, its first public screening was an unmitigated disaster. The film was shown on the same night that Lyndon Johnson announced he would not seek re-election; coincidentally it was rumored that the studio head would lose his job if the film wasn’t a hit.  When the audience left the theater in droves, the studio’s publicity department said, “Gentlemen, tonight we have lost two presidents.”  The film subsequently garnered a great deal of media coverage and soon became a massive hit:  it was still in theaters in 1972, four years after its release.  Few critics failed to note his stunning use of classical music, most notably Richard Strauss’ Thus Spoke Zarathustra.  Kubrick’s powerful application of music to amplify atmosphere, character, and story was a signature of his filmmaking.  This movie also set a new standard for a movie special effects. Audiences and critics were polarized by 2001: A Space Odyssey.  The noted critic, Pauline Kael, famously derided it, but many other critics hailed the film as a masterpiece.

Kubrick then moved his family to England, where he took advantage of the so-called Eady plan, which provided considerable tax incentives for foreign film producers who used at least 80 percent British labor.  His first project there was Lolita (1962), a film version of Vladimir Nabokov’s controversial examination of love and lust.  Kubrick wrote the bulk of the screenplay for that darkest of dark comedies, which most critics believed never fully solves the problem of transposing Nabokov’s difficult novel to the screen.  Many agreed, however, that James Mason was superb as the professor who becomes obsessed with a 13-year-old girl, Sue Lyon.  Peter Sellers and Shelley Winters also submitted striking performances despite stirring up plenty of controversy of its own with its subject matter (particularly with the Catholic League of Decency). Lolita was a box office hit.  After the success of Lolita, Kubrick’s big breakthrough came with Dr. Strangelove or How I learned to Stop Worrying and Love the Bomb (1964).  This wickedly funny comedy is about the cold war arms race written by Kubrick, Terry Southern, and Peter George (on whose novel Red alert was based).  In the planning stages, Kubrick sought to treat the material seriously, but he kept finding himself gravitating toward farce and eventually gave in to that impulse which still managing to powerfully convey the horrible prospect of nuclear annihilation.  He made the most of the wonderfully inventive performances by George C. Scott, Sterling Hayden, and especially Peter Sellers, who plays three very different but equally memorable characters.  Dr. Strangelove earned Kubrick his first Academy Award nomination for Best Picture, Best Actor—Peter Sellers, and Best Screenplay.

After moving to England in the early1960s, Kubrick slowly gained a reputation as a recluse-a person who lives in seclusion.  He gradually reduced the time he spent anywhere other than on a studio set or in his home office, refused most interview requests and was rarely photographed, never formally.  He kept to a schedule of working at night and sleeping during the day, which allowed him to keep North American time.  During this time, he had his sister tape Yankee and NFL games, particularly those of the New York Giants, which were airmailed to him.  Stanley Kubrick died in his sleep after suffering a heart attack at his home in Childwickbury Manor, Hertfordshire, England on March 7, 1999, hours after delivering a print of what would be his last film,  Eyes Wide Shut (1999) to the studio.  Starring Nicole Kidman and Tom Cruise (who were married at the time), went on to earn both commercial and critical acclaim, including Golden Globe and Satellite Award nominations.  Part of the new Hollywood film-making wave, Kubrick’s films are considered by film historian Michael Ciment to be “among the most important contributions to world cinema in the twentieth century”.  He is frequently cited as one of the greatest and most influential directors in the history of cinema.