Voices of Polonia by Ted Rajchel 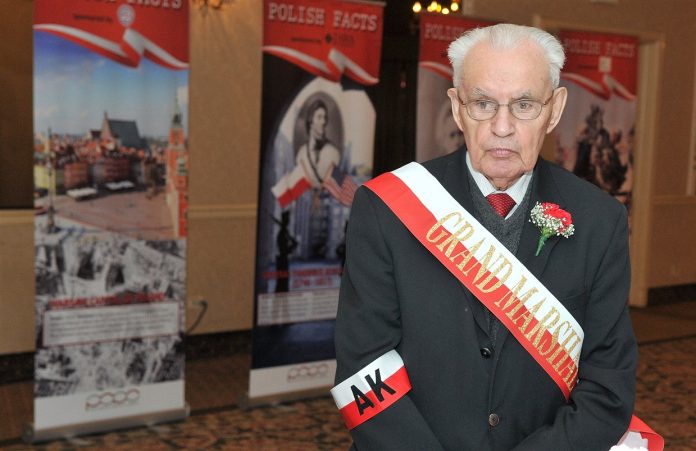 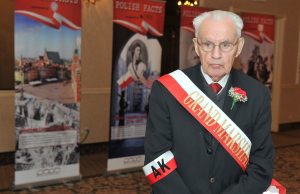 John (Jan} F. Krawiec was born on June 15, 1919, in Bachorzee, Poland. He received his elementary and high school education in Przemysl, Poland. In July 1939 he graduated from the army’s officer cadet training unit and participated in the September’s campaign against Nazi Germany’s invading forces. In October 1939 he joined the Polish underground movement, working in various capacities, but mainly in underground newspapers. Jan Krawiec, a Polish underground fighter, who survived Auschwitz, went on to be a newsman in Chicago, died In October 2020. He was 101 and had lived long enough to see his homeland freed from Soviet domination. It was a silent killer called Covid-19 that did what Nazi Germany couldn’t do. It took Krawiec’ life at a nursing home in suburban Chicago. Krawiec, the longtime editor of Chicago’s leading Polish language, lived long enough to see the dream of his generation of exiles come true-his homeland of Poland to be a free country. In his final years, he devoted himself to publishing books in Polish about his ordeal and telling the younger generations in

English what happened to him and his country during World War II.  “He did so,” friends said.

with the timing of a practiced comedian, who specialized in very dark humor.” The German invasion, torture at the hands of the Gestapo, the horrors of Auschwitz and Buchenwald­ newsman Jan Krawiec survived them all and got his life’s story out way ahead of the deadline.

What the Nazi Germans did to Him

Consider his description to a researcher for the United States Holocaust Memorial Museum of what the Nazi Germans did to him after he was arrested in April 1943: “They brought me to a basement,” Krawiec said in precise, but in heavily accented English. “There was a hook in the ceiling. They tied my arms behind me and pulled me up so I was hanging with my feet off the ground. It was very painful. Then they went to lunch,”  he said.  The story and its delivery were that the story took place about Krawiec’s torture, said Amanda Friedeman, Assistant Director of Education at the Illinois Holocaust Museum and Educational Center in the Chicago suburb of Skokie. “He was such an extraordinary storyteller/’ Friedeman  said of  Krawiec, who for more than a dozen years, would go to the Center and talk to groups of students  about the war that left him with the number 153156 tattooed on his left arm.”  His story was so compelling. To Sue Kowall, of Hoffman Estates, Illinois, Krawiec was “Uncle John”, who doted on his nieces and nephews and who would joke rather than complain about getting older. I would ask him how he was doing and he would say, “Well, I got out of bed,”  said Sue Kowall, He was a tough Polish guy”. Krawiec was serving in the Polish army and planning to become a journalist when the Germans invaded on September 1, 1939, and touched off World War II. Sixteen days later, when the Russians invaded from the East, and the Polish defenders finally collapsed, he burled his uniform and sneaked back to his village, where he joined the Polish underground and ran a newspaper until 1943 when he was arrested. Krawiec said he wasn’t picked up for running an illegal newspaper. In a case of mistaken identity, he was suspected of killing a Gestapo chief in a nearby town, which is how he wound up being hung from the ceiling by his arms and beaten over several days,  he said.  Krawiec continued by saying that rather than letting him go, the Germans placed him and hundreds of other  Polish prisoners into a cattle car and transported them to Auschwitz. There they were stripped, tattooed, and shaved.”They shaved us from the head all the way down”, Krawiec said, “That was very painful.” It was September 1943, and while most of the Jews arriving at Auschwitz were immediately dispatched to the gas chambers, slave labor was the fate of Polish Catholic prisoners like Krawiec.    He said that from his barracks, he could see from “afar” Jewish families being marched to the gas chambers and the smoke belching from the chimneys of the crematoriums. “When the wind blew, there was the very characteristic smell of burning flesh.  Three weeks later he and other captured Poles were abruptly transported to the Buchenwald concentration camp, which was in Germany proper, where the factories needed slave workers,”  he said. “There he was put to work felling trees and was then made to slave away in munitions factories, where mostly imprisoned German criminals assigned by the Nazis to police the other prisoners, would beat them if they didn’t work hard enough,”  he said.  Those who tried to escape and were caught were hanged publically so that we could all see. They were fed just enough to stay alive,” he added. With the allied forces getting closer, the Germans evacuated Buchenwald in April 1945 and forced the prisoners to embark on a death march, shooting the inmates who couldn1 t keep up.  Krawiec said that he and the other Poles sustained themselves by eating stolen dog biscuits until they were liberated by the US Troops. “If not for those dog biscuits, I would not be here,” he said.  With a Russian-backed communist regime taking over his homeland of Poland, Krawiec went into exile.
Arrived Four Years Later in Chicago, Illinois, USA

Chicago was then a mecca for Poles displaced by the war. For the next decade, Krawiec worked as a mechanic for the Canfield Beverage Co. before he restarted his own journalism career as a writer for a Polish-language newspaper. A few years later he moved to a new Polish-language newspaper and was appointed editor-in-chief, a post he held until he retired in 1985.  His strong stance against the Polish communist government made him many enemies in  Warsaw and allies in Washington. He was among the reporters who accompanied President  Richard Nixon on his visit to Poland in 1972. . It was “the only way he could safely return to his homeland of Poland.”

Krawiec remained a newspaper legend, and the old-timers would like how he handled complaints from unhappy readers. In his final years, Krawiec devoted himself the publishing

books in Polish about his ordeal and telling the younger generation in English what happened to him and his country of Poland during World War II. In retirement, Krawiec kept to a strict schedule-on Mondays and Wednesdays he went to the gym to lift weights and swim. On Tuesdays and Thursdays, he volunteered at the holocaust museum. On Fridays, he drove into Chicago from his apartment in Evanston and bought copies of the newspaper for him self. Krawiec, in his testimony, spoke of leaving behind a “true love” in Poland. He never married. “Some of us were meant to be bachelors and that is ok.” People recalled him saying that “he was content with his life in America.” “Krawiec lived out his last days at a rehabilitation center in Hoffman Estates,” Kowall said. He died there on October 28, 2020, after a two-week battle with the coronavirus. The plan is to return his ashes to his home village in Poland so that they could be buried beside the remains of his parents. One of his reporter friends said that the last time she saw him was at his 100th birthday party when he was served a cake with the words “stolat” (sto lat), which means literally means “may you live to be 100.  This saying was written on top of the cake. It is the Polish equivalent of a happy Birthday. He was quite proud of himself for making it that far. His friends thought he would live forever. He was a happy man and died in America free. It was a silent killer called COVID-19 that did what the Nazis couldn’t do to him. He was a happy 101 years old man. Jan Krawiec, Nazi foe and Auschwitz survivor.