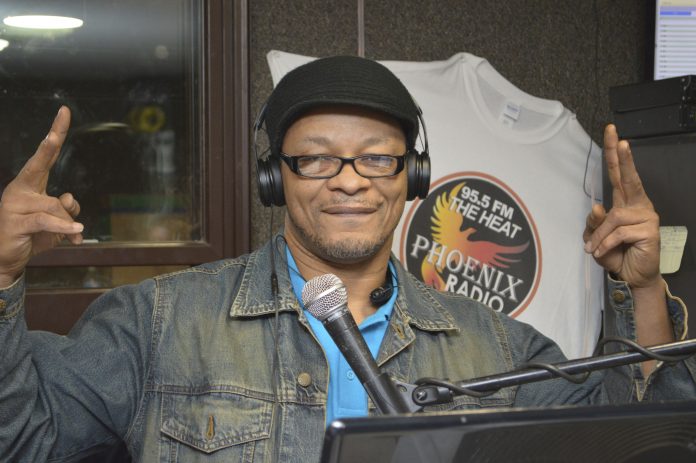 By the staff of Phoenix Radio/Utica Phoenix

September 24 will always be a sad day for the staff, collaborators, and fans of Phoenix Radio.  On this day in 2019, the station lost Bryson Collins, known professionally as “Big B.” This year, on September 24,2020, Big B’s’ co-workers, family members, and friends paid tribute to him.

Bobby Bounce aka DJ 808 then took to the airwaves. He also hosted Shimeen and Pam. His show was a show stopper. Bryson(Big B) loved Bobby’s musical knowledge and mastery of scratching records. He is what great DJ’S are made of and displays the uniqueness of what the Hip-Hop genre represents.

Phoenix Radio Station Owner, Utica Phoenix Editor-in-Chief and Host of “The Hot Seat,” Cassandra Harris-Lockwood devoted her entire program to Big B on that day, including discussion of his induction into the new Hip Hop section of the Black History Archive at Hamilton College. She was joined by B’s lifelong friend, Mike Johnson.

In addition to the day of on-air programming, a special edition of the Phoenix Radio/Utica Phoenix music column “The Heat Beat” by Jess Szabo was devoted to Collins. Friends, family members, and co-workers spoke of what DJ Big B meant to them.

Following the memorial day, those who loved Big B continued to pay tribute to him. His impact on the radio station, the local music scene, and the lives of those who both listened to him on the air and at events he DJ’ed will never be diminished or forgotten.

“I have been friends with Bryson/DJ Big B for well over forty years,”said Mark McKinsey, known professionally as DJ MixMaster of the Def-Is-It group of artists. “He was the DJ of Def-Is-It back in the 1980’s and I was the backup. For me, last year this day (September 24), was the day the music died. However, we celebrate his life and legacy. He was a great person, amazing father and spouse, a phenomenal DJ, and a geek and a handyman.”

McKinsey added, “For me, he was a close friend, more like a brother. We hung out, fought, cracked jokes,and did things like blood brothers. I am truly happy to hear of his induction into Hamilton College’s Black History Archives’ Hip-Hop Category. I know his hard work assisting with two radio stations from the ground up paved the way, not to mention his tenacity when he was on the grind. I will miss him everyday, and hope he is setting up the turntables for when we meet again.”

Mike Johnson is Bryson/Big B’s’ best friend. He added, “As I sit on many days missing one of my closest friends of over forty-plus years, I think of what I would do if he were here. Losing him at a time when we were at our best but only a thousand meters apart is a story in itself. Bryson’s legacy wasn’t perceived until after he went to sleep in death. His presence is missed, but his presence in his legacy is stuck in us like he gave his dna.”

Johnson further stated, “My time with him was always priceless and unique from all my other friends. His style, his grace, and even his not so graceful moments prove he was one of a kind. I feel a sense of emptiness when I realize, even a year after his death, that I cannot call him for lunch, dinner, or a friendly volley of topics and phrases that we coined in our crew for years past and years to come.”

Johnson reminded everyone of the need to cherish amazing people, and amazing friends, like Big B.

“If you have a friend like I have in Bryce, do not miss the opportunity to spend as much time as you can with them,” he said. “If Bryce were here, I know what I would be doing. I would be spending time with him.”

The memorial day’s events were planned, coordinated, and managed by Utica singer and Phoenix Media/For the Good, Inc. Manager Theresa Mancuso, known on Phoenix Radio as “Lady T.” The following is her statement about her beloved friend and treasured colleague:

Bryson Collins was my right hand man, my road dog at times, even though I am certain Mike Johnson would claim that title, my confidant, and one of my best friends.

September 24,2019 was one of the saddest days of my life. As it is the same for so many. When I received the message that Bryson had gone in the hospital, I immediately messaged him and said, “I heard you are sick, are you okay?” He did not respond. Shortly thereafter, my phone rang and I was hoping it was him. Instead, I received the news that Bryson had died unexpectedly.

It was as if someone had shot me straight through the heart, it was broken in an instant. I remember thinking, “Why didn’t you call me?” We talked practically every day unless I was playing “Words with Friends”, with Shimeen, then I would tell him he would have to wait.

I had known Bryson for thirty-two years. I viewed him as family. He always made me laugh, and I could talk to him about anything. As good friends do, he would listen even when I was sure he had better things to do… When I needed it the most, he would remind me of everything he saw in me. He often lifted my spirits when I was angry or upset about whatever that day’s events had brought me. He was amazing. He never complained and was always humble. I loved the fact that he commanded the room when he walked in. He seemed to carry sunshine with him. His talents were immeasurable. He was smart and could do practically anything. He was one of a kind. He had every reason to be arrogant but he never was.

Before the radio station came into existence. We, Cassandra and I, were talking about all the things we would need to make this station different, while making it inclusive to our community. My answer was, “If you want this radio station to represent this community there are two names you need to know. Bryson Collins, “Big B” and DJ Butter.”

When the radio station got up and running Bryson came in, it was clear this was a man of integrity who was a master at his craft and clearly took pride in everything he did here. Cassandra made him our head DJ. Anything we threw at him he would succeed at. He was not only a hard worker but an innovator and dreamer. He exceeded every expectation. There is not a day that goes by that we don’t think of him in some fashion, talk about him to someone here at the station or miss him terribly.

When the anniversary of his passing was approaching I knew that everyone here at Phoenix Radio wanted to remember him. We had all felt his absence and this great loss. I decided regardless of anything else I had to do, no matter how much work, or what was going on, I had to give honor to my friend. I would develop this day of programming for everyone in our community to enjoy and remember Big B, his voice, his echo, and his famous lines, “Ya know what I am sayin, and stick and stay.”

We had to celebrate his life, in the place he loved so much. I held meetings, reached out to guests, coordinated DJ, I even nicely demanded that Cassandra’s Hot Seat be solely about him. I didn’t want to hear anything else but Bryson Collin’s name, and memories, throughout this special day.

I prayed, God, “please make this perfect for my friend.” I wanted him to see we could never forget who he was. God answered, with Cassandra and Alex Pollard aka AJ-Spin working diligently to get Bryson inducted into the Black History Archive; which she developed and currently being featured at Hamilton College.

Then God, gave us more. Not only would Bryson be inducted into the archive but memorabilia would be taken and a new Hip Hop section would be developed and he would be the first African American male to be memorialized in it. What an honor and blessing. One year later Bryson was still making a mark on our community.

As I got ready for the day’s events I was talking to God as I do every morning. Would my friend, who I believe is with God, know how important he was to everyone he touched? And what more can I say about him? Suddenly the voice in my head said, “he was your blessing.”

Bryson was a blessing in my life and countless others. He has made an indelible mark on my heart. Never to wear off, and always permanent. I realized that God, loved me enough to share this beautiful human being with me and sad for those who never got to meet him. So until we meet again and as long as I have a say, his memory will live on here at 95.5 FM The Heat Phoenix Radio, as well as, forever in my heart.