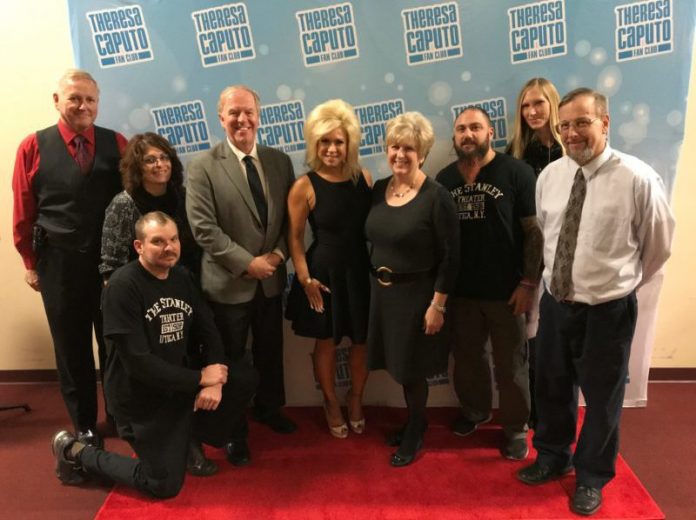 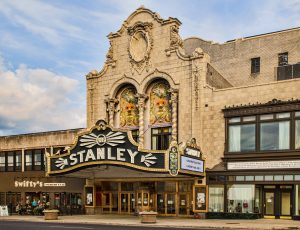 On November 18th, 2017 Theresa Caputo, known to most as The Long Island Medium, returned to the Stanley Theatre to a sold-out crowd. This was not her first time here and after experiencing her show certainly, not her last.

Both a curious, non-believing skeptic and doubting Thomas, this writer sat awaiting her entrance onto the stage wondering, “Would I be chosen for a reading? Would it be accurate? Maybe? But I doubt it.” I was certain I could foil her act. With a racing mind, the show began.

Caputo began her show by telling the crowd that she donates all of her proceeds from her fan club to charity and to her fans themselves. She went on to say that she always starts her show with the National Anthem in honor of all military officers.

With her sassy wit and robust personality, she stated, “I am not trying to be rude but, it does not matter to me if you believe in what I do. Let’s face it. It seems absolutely crazy that I communicate with the dead.” Silence hovered over the crowd.

Theresa then turned her focus to a man in a red shirt in the front row and said, “Sir, you look F’in thrilled to be here.” The crowd roared as she heckled him a bit saying, “I know your wife made you come, right?” Laughter filled the theatre…

Theresa then stated the main reason she does this is because she understands how important it is for her fans, to understand that our loved ones who pass away are at peace. She stated, “It took me many years to come to terms with my gift but I have and I feel obligated to share it.”
Theresa then began making her way through the theatre stopping at the bottom of the stairs that led off the stage. Fixating on the front row, Theresa asked, “Who has the son that has departed?” He tells me that he departed tragically.” A gentleman in the front row that had M&M’s in his pocket, raised his hand. Theresa then decided to take the M&M’s from his pocket, proceeded to open them and ate them. The crowd roared with laughter.

Theresa stated, “Your son told me you do not truly like these, and it’s okay to eat them because you’re not gonna, right? You carry them for him.” The Father confirmed that was the case.

She then turned to the mother and said, “Your son wants you to know, you were there to hold me when I was born and there to hold me when I passed. Do you understand that?” The mother tearfully nodded, yes. Theresa asked, “Was he sick? I get a feeling of sickness.” The couple confirmed that the son had NonHodgkin’s lymphoma. Theresa went on to have a discussion with the couple revealing more details that only the mother and father could have known.

This writer’s skepticism went from just that… to thinking “I believe this is real.”

As she moved forward throughout the theatre, Theresa addressed several people. Stopping at a young lady who lost her Father when she was five-years-old, Theresa said, “He likes your poem.” With tears streaming from her face the young lady said, “No one knows I write these poems.” As they spoke it became clear that this young lady needed to hear what Theresa had to say. She again giving details of memories that only the receiver of the reading could know.

Theresa began walking again asking, “Where is Cory’s mom? I have a message for Alex. Please tell Alex I am not mad at him.” This was a tragic story where a young driver, Alex, and his two friends were in a fatal car crash leaving only Alex the sole survivor. As they continued talking Theresa said, “Cory said he likes when you wear his hoodies.” The mother cried, and said I never wore a hoodie before.” It was at this point that this writer could not contain her own tears.

After listening to many other readings, there was no doubt left in this writer’s mind. Not only is this type of gift possible but it is not staged for television. By the time Theresa had reached the area of the Theatre where I sat; this writer like so many sitting around me was hoping, to be read. Repeated in my head were the words, “Please Mom, talk to me.”

Suddenly, I realized what Theresa stated is true… We all just want to know that our loved ones are at peace.