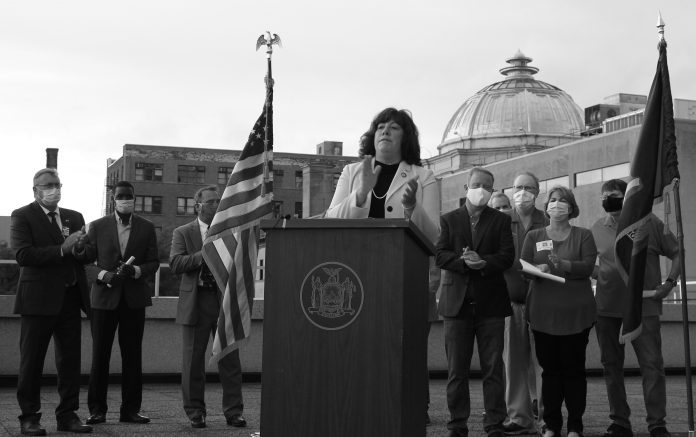 There is a major issue that no one is talking about. A potential catastrophe that is quietly being ignored. That is the issue of MVHS gutting healthcare staff. The nurses are the variable canary in the coal mine alerting anyone they can to the fact that the area has been left without sufficient patient care and when the next wave of corona comes, as it probably will, the people of the Mohawk Valley will be…out of luck. As covered in previous articles, the multi-conglomerate organization known as MVHS (Mohawk Valley Health System) has this year laid off a colossal amount of staff (nurses, techs, cleaning staff) in the middle of a pandemic, all while taking 14 million dollars in government relief funds.
There’s a dangerous cycle MVHS has been playing with their staff and ultimately us:
MVHS pushes overtime for what few personnel are left. Then they say that overtime cost them too much. They solve that particular burden by eliminating staff. The patient outcomes suffer and then the cycle repeats with MVHS again pushing overtime to try to improve patient outcomes. ‘Patient outcomes’ means your outcomes. You.
MVHS Appetite
This story runs back to the ’90s. Here’s the chronology:
1992 – St Luke’s affiliates with Faxton forming Mohawk Valley Network. This is the conception of Faxton-St Luke’s.
1999 – Faxton and St Luke’s officially combined as Faxton-St Luke’s (FSL).
2011 – Merger talks between St Elizabeth’s and FSL.
2013 – FSL and St E’s affiliate.
2014 – MVHS is created by the union of FSL and St E’s.
So, at one time, there were multiple independent hospitals in the area that could offer competitive prices and care to the general public. Then slowly but surely, MVHS gained a monopoly on healthcare.
Since the outbreak in March, MVHS has taken advantage of the situation to “protect their bottom line”. MVHS realized they could keep the hospitals running with substantially less staff (essential staff) and still maintain a profit. The only way this has been prevented in the past is if hospitals risk losing patients to other hospitals. But if every hospital cuts staff, then no hospital loses patients. Imagine if all of your options for hospitals were equally poor. Insufficient staffing, long waiting, poor care, high accident risks, and of course the same expensive bill.
In a NY Times article on hospital mergers, this was confirmed, “The hospitals have argued that consolidation benefits consumers with cheaper prices from coordinated services and other savings.
But an analysis conducted for The New York Times shows the opposite to be true in many cases. The mergers have essentially banished competition and raised prices for hospital admissions in most cases, according to an examination of 25 metropolitan areas with the highest rate of consolidation from 2010 through 2013, a peak period for mergers.
The analysis showed that the price of an average hospital stay soared, with prices in most areas going up between 11 percent and 54 percent in the years afterward, according to researchers from the Nicholas C. Petris Center at the University of California, Berkeley.”

StrongerTogether Rally
St Elizabeth’s nurses are represented by the New York State Nurses Association (NYSNA). On Aug 22nd, they held a rally to show the public that they are fighting not just for their jobs but for the community’s wellbeing. An array of notable figures showed up. Nurse Lily Werenczak, who orchestrated this event, DJ Salsa, Panda Nation, local NYS Assembly member Marianne Buttenschon, and even a Republican candidate for NYS Assembly named John Zielinski.
Zielinski had this to say about MVHS:
“They have not been dealing very nicely with their employees and especially their unions. They have walked away from the negotiating table with NYSNA and CWA. I’m just urging MVHS. The staff are a big part of the community…there’s almost 6,000 people working and MVHS should have more good faith in dealing with their staff.
Zielinski is planning on pushing two bills; Assembly Bill A2954 the “Safe Staffing for Quality Care Act” that sets minimum ratios of Registered Nurses to patients in hospitals and nursing homes, and Bill 8284 which would require employers to disclose to their staff if they’re using any contractors to try to convince staff not to organize or not to exercise their collective bargaining right.
Both of these bills would be tremendously helpful towards patient care in the area, but have stalled in state government and will require the help of either Zielinski or Assembly member Buttenschon to revive them.

CWA Rally
A week later, the nurses of St Luke’s, represented by the CWA union, held their own rally for the same cause. They were supported by various people from St E’s. Despite the rain and tornado warnings, CWA still showed up to demand safe staffing.
MVHS has reputed the nurse’s claims of a dangerous workplace with the following statement, “This plan [staffing cuts] was put in place with patient safety at the forefront. Reduced staffing was an option due to the realignment of services and right-sizing the organization to current volumes – which are only at 85 percent of what they are normally. This plan does not negatively impact patient care. If it did, it would never have implemented it – no matter how much money would be saved.”
Lily Werenczak, RN laughed when hearing this, stating that she wouldn’t be risking her job by protesting if patient safety wasn’t at risk.
The St Luke’s nurses at the rally had this to say in response to MVHS’s claims about patient safety ‘not being impacted’, “We were already at barebones staffing before Corona. I can tell you that definitely there has been a huge impact. What we go by is Assignment Despite Objection forms (ADO’s). We receive them and review them monthly. An ADO form is a nurse saying ‘you’ve put too much work on me. I can’t handle this workload safely.’ We get these from all levels of caregivers. So, our ADO’s have totally increased. I can tell you that within one month I received over 300 ADO’s which is far more than normal.”
If the caregivers at St Luke’s are submitting a significantly higher amount of ADO’s due to cut staff and they were already short-staffed before the recent cuts, then how could the patient safety not be impacted? Does this not imply that there aren’t enough staff to see to patient’s needs in time, and thus increase the time that each patient is unattended?
Tom Brosnan of CWA claims the issue is that MVHS is top-heavy. “They’re duplicating management, assistant management, and cutting the people who are actually taking care of the patients. You have multiple assistants and multiple managers doing the same job. It’s doubling up on your cost. And instead of cutting down to barebones management positions, they’re cutting down the staff that’s taking care of the patients. As of last year, we got a safe-staffing study done by the Department of Health and their finding was an abomination. That study said ‘we’ll let the hospitals go ahead and set their staffing ratios’.
MVHS has been allowed to self-regulate staff to patient ratios and the result has been painfully obvious.

California Study
In 2004 California passed a Safe Staffing law. It remains the only state to have taken that step despite its success in improving outcomes for patients and working conditions for healthcare workers.
Staffing Ratio studies conducted in 2013, 2014, and 2015 all clearly demonstrate that insufficient staffing negatively impacts patient outcomes and is economically unsound.
Specifically, improved ratios result in fewer hospital acquired infections and injuries, fewer post-surgery deaths, and shorter hospital stays with less time spent in the ICU. Under the ACA, hospitals are penalized for repeated readmissions; mandated ratios decrease those occurrences.

COVID-19 Return?
The fall semester has revealed the risks of Corona resurgence to NYS. SUNY Oneonta just had 105 confirmed cases. Utica College had 19 cases. The local school districts are considering allowing masses of students to attend campuses in person, which unquestionably raises the concern of COVID resurgence.
Even if Corona virus doesn’t hit the area, what about the flu? Last winter, the area was devastated by the flu virus and there’s no reason that couldn’t happen again. Every nurse I’ve talked to has repeatedly told me that they simply don’t have the manpower to deal with any major viral outbreak, Corona, or flu. Examining the bed count of the tri-county area, unfortunately, confirms this.

Beds?
MVHS is attempting to be the only game in town for the tri-county area. So, let’s look at supply and demand:
Oneida county’s population is 228,671, Herkimer county has 61,319, and Madison county’s is 70,941. That’s about 360,000 people that require adequate care. That’s the demand, now let’s see the supply:
MVHS acute beds: 571; MVHS long term beds: 202; Little falls bed count: 25; Rome Memorial hospital bed count: 171; Hamilton Community Memorial hospital: 25
That puts the max bed count of the tri-county area at 994. Meaning MVHS and the three other small hospitals have beds for 0.27% of the population.
Even if these hospitals were to double their capacity overnight, they still wouldn’t have enough resources to combat a major outbreak like that which we’ve seen in NYC.
St Luke’s nurse Randie Schrader cautioned, “What we saw in other areas that did get a large surge, is that they had healthcare provider fatigue, healthcare provider illness, providers that actually died. We actually have seen some local frontline healthcare people of our own who….did not fare well. If we get a surge of Coronavirus, that is anticipated, we’re not gonna have enough staff and the base staff that we have…we’re gonna lose those members because of fatigue and illness.”

Closing
MVHS is claiming that everything is fine, but the nurses (the actual frontline people) are warning everyone about the dire situation that 360,000 people are in. Without adequate staffing, this area effectively has no real healthcare. 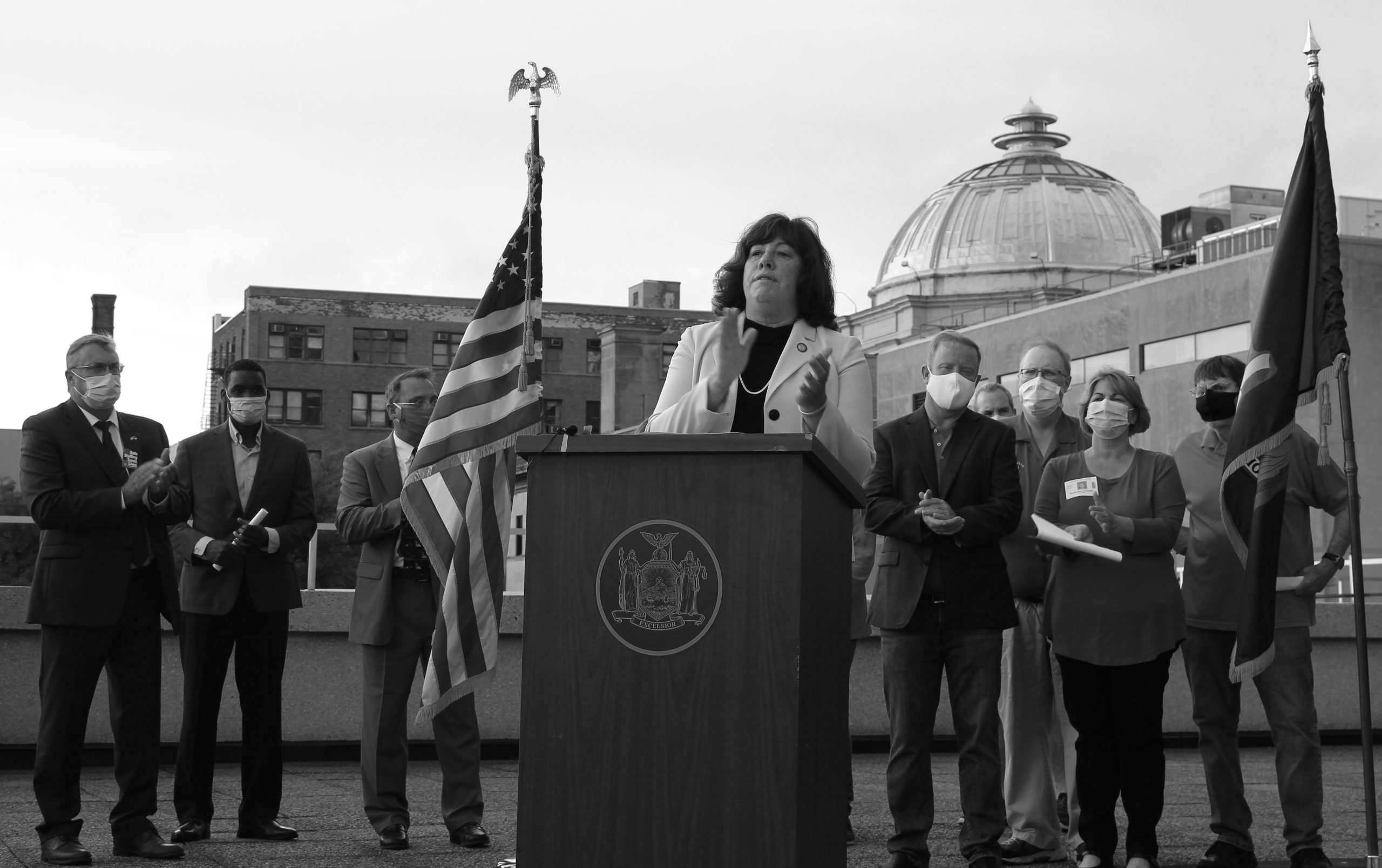 Fortunately, most of the NYS Assembly is now considering combating this issue with the aforementioned Assembly Bill A2954 “Safe Staffing for Quality Care Act”. On Sep 2nd, CWA & NYSNA reps, Albany Council President Ellis, Assembly member Buttenschon, and downstate Assembly member Gunther held a press briefing at the State Office Building where they declared their intention to see Bill A2954 passed.
Buttenschon invited these figures to the area and is keenly fighting for Bill A2954. She has a rather positive outlook on the matter because she has seen bipartisan support. She encourages every concerned citizen to contact their local Reps and demand immediate action.
Assemblywoman Aileen Gunther stated that the bill has such widespread support because the issue is statewide, possibly nationwide, and needs to be addressed now. “There are 150 NYS Assembly people, and I have 120 of them, both parties, on my bill. Also, it’s carried in the senate, and we’ve been trying to pass this bill for years. I think that the time is now. The governor, and many people across the United States as well as NYS have called nurses “Our heroes”. And they have been our heroes all through COVID. And I think that it’s time to make sure that our heroes have appropriate staffing in all acute and long-term care facilities across NYS.