The Heat Beat: Robert Johnson and The Crossroads

The Urban Legends of Blues: Robert Johnson and the Crossroads 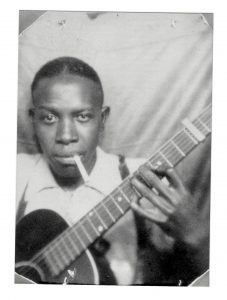 Music fans listening to 95.5 the Heat/Phoenix Radio on Wednesday evening from 8-10 p.m. know that Phoenix Radio now features Blues music. The program is called “Blues Power” and is hosted by Utica singer-songwriter and Masters of Jazz Program Host Lou Santacroce.

Make sure to listen every week, and you might just hear some music by Robert Johnson (1911-1938). Johnson was not only one of the greats in the Blues, he is the subject of one of the genre’s most enduring urban legends.

According to the legend, Robert Johnson wanted nothing more than to play the Blues. He played whenever he could. There was just one problem. He couldn’t play. Johnson wasn’t just a hobby-level player when he wished he could be professional. He wasn’t even just bad at what he did. He was strikingly awful, so awful that bar owners couldn’t let him take the stage because he’d run off the customers. It was probably not terribly surprising when he disappeared. Most people would give up and go away if they were that poorly received. The shock came when he returned. Johnson not only returned to the stage a year after he disappeared, he returned as one of the best guitar players anyone had ever heard. Johnson would go on to record forty-one tracks of twenty-nine songs between 1936 and 1937. He died in 1938, but those recordings would form the basis of his eventual status as one of the legends of the Blues.

The shock at Johnson’s astounding improvement in skill level soon turned to speculation. Johnson himself never made this claim, but others began to speculate that he must have sold his soul to the devil at the crossroads in exchange for such talent.

Today, such a legend could spring up literally overnight. One tweet, one Facebook status update, one utterance on a YouTube or Instagram or TikTok video, and a brand new rumor is born. A few clicks, and it’s all over the world. Back in the 1930s, things of course spread much slower, but this particular legend attached itself to Johnson quickly, as it was already part of the Blues and Jazz scenes of the era. How the legend came to those particular communities is up for debate. Some say the legend was imported when Black people were brought from Africa as slaves, with Satan a Christian version of trickster gods from African legends. Others argue that there are too many western elements in the legend for it to be strictly African in origin. The technical name for “selling your soul to the devil in exchange for talent and/or good fortune” is a Faustian pact, and Faustian pacts can be traced back to sixteenth-century German legend.

Whether the popularity of Faustian legend was the result of white European culture being imposed on Black people in America, the importing of African legends, or a combination of both, it was firmly planted and popular by Johnson’s time. The bars where Johnson played, known as “juke joints,” already had a bad reputation. Jazz and Blues were similarly painted as “devil music” or music that celebrated debauchery.

Jelly Roll Morton (1890-1941) claimed to have invented Jazz. While this claim was widely disputed, especially by other people who played the same style of music at the time, nobody doubted that Jelly Roll was a bit odd. His grandmother, Eulalie Echo, is said to have sold his soul to the devil in a voodoo ritual in exchange for his talent. Some say he was heard calling for the Holy Spirit to break the pact on his death bed.

Other musicians who lived from the late 1800s through the 1930s embraced the legend, probably in an effort to enhance their own fame. Peetie Wheatstraw (1902-1941) referred to himself as “the high sheriff from hell” and “the devil’s son-in-law.” He claimed he had sold his soul at the crossroads for success. Tommy Johnson, no relation to Robert Johnson, lived from 1896-1955. He claimed to have handed his guitar to a mysterious figure at the crossroads for some magical tuning.

Anyone who follows a musician or any other type of artist on YouTube or Instagram today can see that with constant learning, practice, and dedication, skills can develop dramatically in the course of a year. Johnson didn’t sell his soul. He worked hard. He just did it out of the view of anyone he knew, so it seemed as though the improvement happened instantly. But the ease of debunking the urban legend does not lessen its hold on popular music. The legend was featured in a 2009 episode of KISS lead singer Gene Simmons’ reality show “Family Jewels.” Internet gossip sites currently speculate that artists from Jay-Z to Miley Cyrus to Eminem have made Faustian pacts today.

To learn more about the Blues while you enjoy the best Blues music around, tune in to “Blues Power” every Wednesday evening. The show is broadcast and streamed exclusively on 95.5 the Heat/Phoenix Radio.