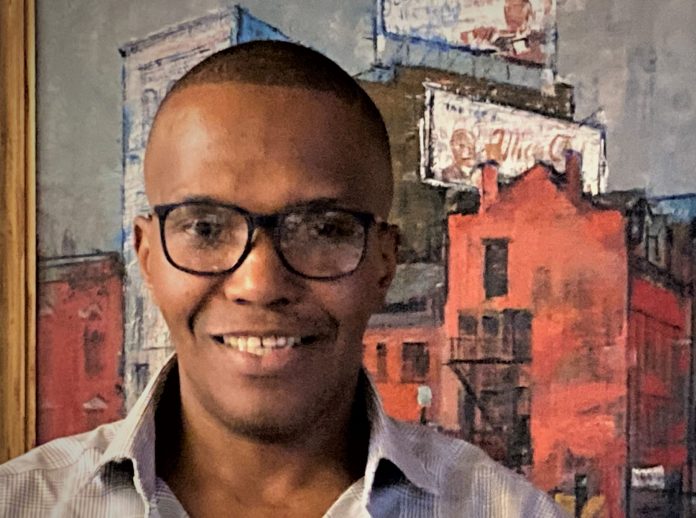 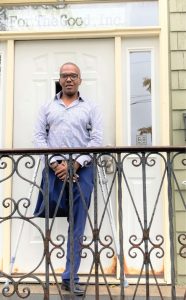 The Utica Phoenix has added its newest salesperson, a man who brings unique work experience to his field. Enter Richard Brown, a somewhat well-known individual to the merchants of Utica. Richard, better known as “Jodi” and also known as “Playboy”, just got out of a two-year stint in prison – the end of an old life and the beginning of a new one.

Cassandra Harris-Lockwood, editor-in-chief of this paper, hired him despite his questionable background:

“I’ve been at this job long enough to know that the guy with the most impressive resume can be a total disappointment when it’s all said and done.

Jodi reached out to me over a period of time. He was persistent. He had a message to convey. He is on a mission to reach out to his community. A community he is well known in and he cares about. (All good traits for a salesman) A community in peril that he is determined to help improve. Jodi made the most of the training available while he was behind bars. He took every course he could for self-improvement.

I had heard he was a recent parolee and had spent a long time in prison. I agreed to have him on the Hot Seat with another recent parolee who also was on a mission. They both did a good job on the show expressing their commitment to guiding young people from the path which they both had followed.

Both of these men took a swipe at the sales position and Jodi is the one who stuck it out. He has a background in sales. He has a reputation for being ‘an honest criminal’ a ‘good guy’. He’s handsome, well liked in the community and had a lot of well-known business people as clients over the years.

In media we sell air and space. It’s not like he could siphon off stock to sell. Besides, Jodi is on a mission. He consistently refers to his younger associates still in the world of crime and understands that his conversion to the life of legitimate businessman is being closely observed.

Jodi and I share in the commitment to improve our community. He can be an influence and have impact in ways that I will never be able to penetrate. His example to them and business success are crucial to young men contemplating their future. We are happy to have Richard ‘’Jodi’ Brown on board.”

Forty-two year old Jodi, who was born right here in Utica, has spent more years of his life in prison than he has as a free man. But in between prison stretches, he spent his time hustling on the streets as a sort of middle man for stolen merchandise. He developed a reputation for being an honest dealer, but as he reminded me in the interview, no matter how good you may be on the street, you’ll always end up dead or in jail. Given that, he’s been incredibly happy to be free again and extremely hard working.

According to Cassandra Harris-Lockwood; He keeps saying, “I’m so grateful for you giving me this chance”, and I said, “I didn’t give you a chance. I gave you a job, and you’re knocking it outta the park.

Jodi: My first time in prison was when I was 16. I did two years for possession of a handgun and assault in the second degree, and criminal possession of a controlled substance.

I got more time in prison than I do in society right now. Max prisons: Attica, Clinton, Auburn, Green Haven, Five Points…. All the max prisons. —- I did 25 months straight in Isolation. Two years and a month straight in a solitary cell Upstate in a correctional facility. That whole prison is a box. You just take it a day at a time.

Phoenix: What’s the hardest part about trying to get back into regular life?

Jodi: The hardest part for me is… I mean the transition like…I left the negative life alone and now I’m on the right path and that’s the most hardest part. Like money…just…everything is just tough, hard.

Phoenix: So, life is a lot easier when you’re on that negative path?

Jodi: No! It’s easier, but it’s not easier. It’s not that easy, just the money and all that, but you are very uncomfortable, very not-happy watching your back 24/7. It’s not easy like that. [But] you’re raking in a whole lot more cash.

When Jodi thought about it, he claimed he could make around $300k in a good year just by scamming.

Phoenix: But how do most people living that kind of street life end up?

Phoenix: How did you end up in that life?

Jodi: I mean I can’t say I had a bad upbringing, because my grandmother raised me, but my mother and my father wasn’t in my life so I was looking for more role models as I was growing up in Corn Hill.

Jodi more or less inherited his parent’s lifestyles as his mother worked the streets and his father was a drug dealer. With that kind of upbringing, education becomes less of a priority. By the time he was 16, he spent two days in Junior High, then straight to prison.

The two years he spent locked in solitary confinement did not help his feelings towards authority, but he still respects his Parole Officer who he describes as wanting him to succeed.

Jodi’s feelings towards cops though are interesting and not uncommon among criminals. Sort of a feeling of mutual respect along the lines of, “criminals and cops are just two opposing teams on different sides of the fence”.

Jodi: They [cops] got a job to do and they doing their job. I can’t speak about all the other cops doing the stuff they been doing – abusing Black people and all that. [They’re] Some good cops and some bad cops.

Any major life transition is fraught with difficulties, but transitioning from prison to civilian life is typically especially hard. In Jodi’s case, the more difficult transition is going from a life where he was making money hand over fist to the regular life where he waits just like the rest of us. However, he said the benefit is that when you’re making money legally, you’re not constantly looking over your shoulder and you’re happy.

Jodi lost a leg to the street life back in ‘99, and leaned on crutches as he was interviewed, occasionally stabbing the ground with a crutch to emphasize a point.

Jodi: Life is hard, but I’m not stressed. That’s the difference. I’d rather be happy and broke than have money and be miserable.

When asked about loyalty in gangs, he said this: “There ain’t no friends when you in the gang. Everybody’s in it for themself. Yeah, there’s a couple of people you are alright with, but at the end of the day, they be the same ones that shoot you in the back.”

Jodi lost his leg because someone he was close with shot it.

One of the big questions is – What caused him to suddenly change his life?

Now free and turning his life around, Jodi has plans. He’s working on going to school for business. Immediately he’s applying the same tools learned street hustling to getting people to buy ad space in this very publication. “Hustling” usually gets associated with “conning”. You picture some guy on a street corner trying way too hard to get you to buy a broken watch. Surprisingly, Jodi said that’s not it at all. He said that good hustling is about letting a good product sell itself, and other people’s general perception of the man seems to confirm that.

Theresa Mancuso is someone who has known Jodi for quite some time and she has a pretty good idea of how everyone in the community does and always has felt about Jodi.

Phoenix: How would I describe Jodi’s reputation?

Theresa: I guess I never really thought about his reputation but I know he is much loved. He is well known in the community and very social. He is funny and bares a presence. Even before changing his life over, what you saw was what you got. I have never known Jodi to lie about who he was. He made no excuses regarding how he was, he took full responsibility for his mistakes and somehow that bared a label of genuine and respectable, even then. So while I can’t speak on behalf of others, seeing the change take place makes you feel so happy for him because I believe everyone knew he could truly be a quality man. He is showing our community that you do not have to let the street life consume you. You do have a choice. He is becoming the example he promised his mother. His character has now been revealed as to who he really is. He shows us all that we determine the path, the path does not determine our direction.

Beyond working for the Phoenix, Richard “Jodi” Brown wants to use his life’s story to save others. He believes that Utica now more than ever needs a Youth Center, and opening one and working as a motivational speaker, a cautionary tale for the young, is his main goal in life now.

Jodi: [Utica] is getting worse. 100% getting worse. When you got killers in broad daylight killing…it wasn’t like that when I was growing up. You got people shooting and they’ll get their kids out there and they’re shooting the whole crowd. That’s dangerous. It’s getting worse. It’s not getting better. Just everything about Utica is a depressing place to live.

Despite the shootings and depression, he still believes though that Utica is worth saving.

“It’s where I’m from. I gotta do something. At least I gotta give it the effort. I’m not gonna say “try” because to try is to fail. I’m gonna give it all the effort I got to help out around, and that’s what I’m doing.”