Rescuers search for survivors as death toll climbs after catastrophic 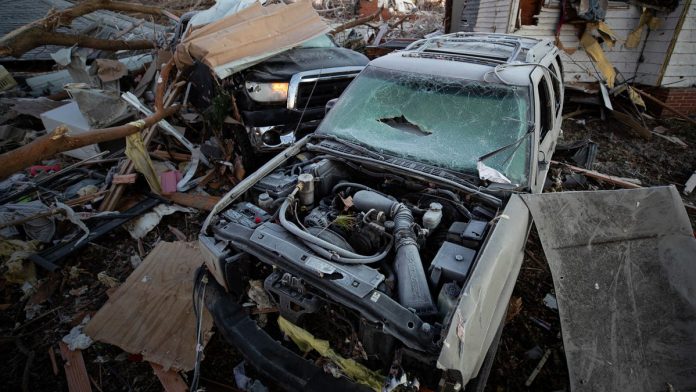 MAYFIELD, Ky. – The death toll from a series of tornadoes that roared across five states rose Sunday as somber rescuers picked through the rubble of shattered buildings and communities, searching for survivors and remains.

More than 30 tornadoes were reported late Friday and early Saturday, according to the National Oceanic and Atmospheric Administration. Kentucky was hardest hit, with 50 confirmed fatalities early Sunday, but scores more people were missing and feared dead after a tornado here destroyed a candle factory where more than 100 people were inside.

In Illinois, at least six people were killed when a tornado ripped through an Amazon warehouse north of St. Louis. Four deaths were confirmed in Tennessee and two each in Arkansas and Missouri.

Kentucky Gov. Andy Beshear said Sunday more than 100 people probably died in his state alone, including at least two of his own relatives. Entire towns were flattened by the twisters, he said. Emergency responders went door-to-door looking for survivors – although in some cases “there aren’t doors,” he said.

He said several children were among the dead.

“I know we lost a number of kids,” Beshear said on the CBS show “Face the Nation.” “This tornado did not discriminate. Anybody in its path, even if they were trying to be safe.”

The federal government declared a state of emergency for Kentucky, and the state National Guard deployed at least 300 members over nine counties, Beshear said Sunday.

“We are still hoping, as we move forward, for some miracles,” he said.

Chainsaws and bulldozers buzzed Sunday in some twister-ravaged neighborhoods. A downtown drug store had power with the help of a generator; temporary bathrooms were set up and a food truck was serving chicken. Smashed churches held Sunday services in loaner chapels.

As more aid arrived from individuals, groups and government agencies, some relatives with still unaccounted-for loved one turned up at a Kentucky State Police site to provide information for identification, hinting at what may be rising death toll.

Beshear struggled to capture the scope of the disaster.

“We’re going to have over 1,000 homes that are just gone,” he said Sunday at a news conference. “I don’t think we’ve had damage at this scale ever.”

The National Weather Service began issuing ominous warnings hours before the storms began rolling across the region. An alert targeting Graves County, where Mayfield is located, was issued more than 30 minutes before the main tornado destroyed large portions of the town.

“If you are in Fulton, southern Graves, and even Calloway county, you need to be ready to invoke your Shelter in Place plan,” the National Weather Service office in Paducah, Kentucky warned. “An intense Tornadic storm may arrive in the 845 to 945 pm time frame. We continue to monitor this closely. Stay tuned.”

Mayfield Consumer Products is a family-owned designer and manufacturer of branded candles and home fragrance products. On Sunday, National Guardsmen in Humvees barred the curious – and the mourning – from entering.

Valeria Yanis, a mother of two, was working a late shift at the candle factory when the tornado hit. She said employees rushed to one of the bathrooms for cover as the lights went out and the noise intensified.

Yanis hid under a water fountain.

“We couldn’t see anything. Everyone was panicking,” she said. “Everything fell on us. Roof, metal, and rocks. We were all trapped. … There were so many screams.”

About 110 people were inside the factory when the tornado hit, Beshear said Sunday. There aren’t any firm numbers on injuries or deaths yet, he said, but added that there haven’t been any live rescues at the factory since Saturday.

Preliminary surveys indicated Kentucky was slammed by at least four tornadoes. The primary culprit carved a path of destruction for more than 200 miles. Seventy miles west of Mayfield in Dawson Springs, Chasity Chappell surveyed a 360-degree, mile-wide swath of rolling hills littered in piles of debris from what were once homes and personal belongings.

“Getting lost in your own city is bad, but that’s what I feel like,” Chappell said. “I don’t recognize this place today.”

Mayfield’s mayor, Kathy Stewart O’Nan, said both the fire station and city hall were destroyed. “I don’t think there’s a pane of glass at any vehicle or property that the city owns that’s not shattered,” she said Sunday.

Path of destruction: A massive tornado ripped through Kentucky for more than 200 miles. Here’s its path.

In Illinois, Edwardsville Fire Chief James Whiteford said late Saturday that another injured Amazon worker was airlifted to a hospital and searchers were carefully picking through the rubble for additional victims. At least 45 people escaped the collapse.

In Tennessee, Gov. Bill Lee toured some of the hardest-hit communities Saturday, calling it a “very difficult day for many of our neighbors.”

Four people were confirmed dead in northwestern Tennessee’s Lake County and neighboring Obion County, with one person still missing in the area and 10 people injured.

In Arkansas, one person died when a tornado slammed a nursing home in Monette, a town of about 1,500 people 60 miles north of Memphis. Gov. Asa Hutchinson said staffers at the home used their own bodies to shield residents from the carnage.

“We have hundreds and hundreds of homes that are lost, businesses that are totally destroyed,” Hutchinson said on “Face the Nation.” He said President Joe Biden promised to help cut through red tape to get federal assistance to the needy as quickly as possible.

In Missouri, Gov. Mike Parson said he would visit some hard-hit areas in St. Charles and Pemiscot counties on Sunday.

“I want all Missourians who have been affected by recent storms to know that my office and all of state government stands ready to assist them,” Parson said on Twitter.

In Kentucky, Beshear expressed gratitude to untouched communities in his state and elsewhere that were providing assistance and prayers.

“We’re hoping for miracles, whether it’s in that candle factory or other places,” he said.