How California plans to copy Texas abortion tactics for gun 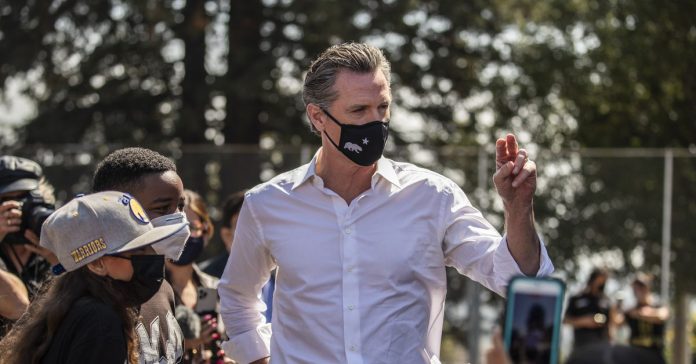 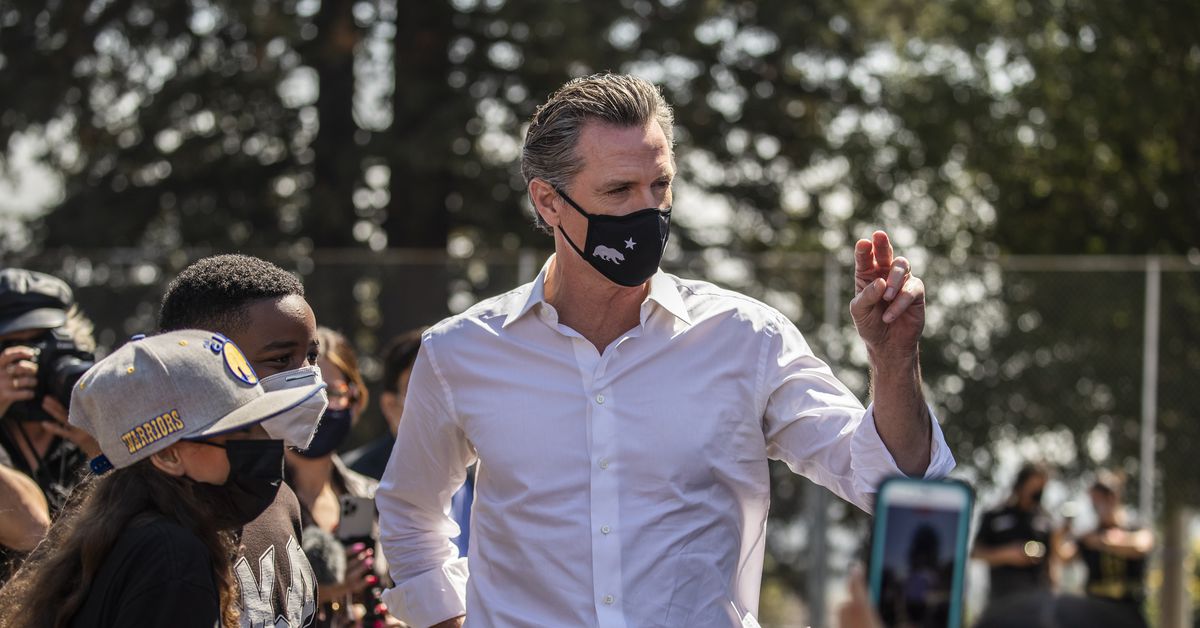 California Gov. Gavin Newsom announced Saturday that his administration will push for a new measure, modeled after Texas’s controversial abortion ban,to limit the sale of assault weapons and “ghost guns” in the state.

The proposed bill, according to a press release from Newsom, would allow Californians to sue “anyone who manufactures, distributes, or sells an assault weapon or ghost gun kit or parts” for damages — the same injunction-skirting mechanism Texas has used to ban all abortions after six weeks, which has so far been permitted by the Supreme Court.

“If that’s the precedent then we’ll let Californians sue those who put ghost guns and assault weapons on our streets,” Newsom said in a tweet Saturday. “If TX can ban abortion and endanger lives, CA can ban deadly weapons of war and save lives.”

If that’s the precedent then we’ll let Californians sue those who put ghost guns and assault weapons on our streets.

If TX can ban abortion and endanger lives, CA can ban deadly weapons of war and save lives. https://t.co/N5Iur9PEUZ

Newsom’s statement comes on the heels of a Friday Supreme Court ruling, which further entrenched Texas’s ability to ban virtually all abortions in the state, despite allowing a suit against Texas state health officials to advance. As Vox’s Ian Millhiser explained:

The upshot of this decision is that, while the abortion provider plaintiffs in Jackson may be able to get a federal court order declaring that SB 8 is unconstitutional, the only real relief they are likely to win is an order preventing a few state health officials from carrying out the minor role they play in enforcing the law. The most important provisions of the law — the ones that effectively prevent anyone from performing an abortion after the sixth week of pregnancy by threatening them with financial ruin if they do so — will most likely remain in effect.

Currently, few details are known about the proposed California legislation other than its enforcement mechanism; according to Newsom’s announcement, plaintiffs suing firearms manufacturers could be awarded at least $10,000, plus attorney’s fees if they win their case. As the LA Times reports, however, the California State Assembly and Attorney General Rob Bonta won’t be able to move on putting together a bill until January 3, when the legislature reconvenes after the holiday break.

Newsom wants to use Texas’s abortion tactics for gun control

SB 8, the law that Newsom references in Saturday’s announcement, hinges on a novel, convoluted enforcement scheme. Though it functionally bans all abortions after a mere six weeks of pregnancy, Texas officials are prohibited from directly enforcing the law, according to its text. Instead, SB 8 is constructed so that an individual — who doesn’t even have to be a Texas resident or have anything to do with the abortion in question — can sue an abortion provider or someone suspected of aiding an abortion performed after the six-week window.

As Vox’s Millhiser explained in August, SB 8 is an intentionally perplexing piece of legislation, designed to thwart legal challenges:

The anti-abortion law, which is before the Supreme Court in a case called Whole Woman’s Health v. Jackson, presents a maze of procedural complexities that are rarely seen in even the most complicated litigation. The law appears to have been drafted to intentionally frustrate lawsuits challenging its constitutionality. And Texas, with an assist from a right-wing appellate court, has thus far manipulated the litigation process to prevent any judge from considering whether SB 8 is lawful.

Already, SB 8 has resulted in a number of copycat bills. According to Forbes, state legislatures in Alabama, Arkansas, Florida, and Ohio have all introduced similar abortion bans, and even more could be on the way.

The proposed California legislation, however, would be the first measure to use a SB 8-style enforcement mechanism for a different goal. Newsom’s proposal would empower private citizens to sue the manufacturers of assault rifles and so-called ghost guns — firearms made from kits, which are difficult to track because they don’t have serial numbers like those that come from licensed companies and are sold by licensed dealers. Ghost gun kits are sold online, are easy to assemble, require no background check to buy, and are impossible for authorities to trace, as the New York Times’s Annie Karni explained in April.

California’s longstanding ban on assault weapons was overturned by a federal district court judge, Robert Benitez, in June; the same judge ruled in 2017 against a ban on magazines with a capacity of more than 10 bullets, and last year blocked a 2019 law requiring background checks for people purchasing ammunition.

Benitez overturned the previous ban on the grounds that it violated the Second Amendment, and explicitly pointed to the AR-15’s military utility in his decision. “Like the Swiss Army knife, the popular AR-15 rifle is a perfect combination of home defense weapon and homeland defense equipment,” Benitez wrote. “Good for both home and battle.”

As Vox’s Dylan Matthews explained in 2019, the AR-15 “is not a specific model — it gets its name from ArmaLite, the company that originally manufactured the rifle,” but the design is no longer patented.Though the AR-15 was initially designed as a military weapon, it has since become one of the most popular rifles in the US.

At the time, Newsom called Benitez’s ruling “a direct threat to public safety and innocent Californians.”

Newsom’s new tactic — adapting the SB 8 model to gun control — would ostensibly circumvent Benitez’s June ruling, taking enforcement of the law out of the hands of the state and shielding the ban itself from judicial challenge in the same way SB 8’s enforcement mechanism does.

California legislation could be a political win-win for Newsom

In some ways, the proposed legislation could be a no-lose strategy for Newsom, who is running for reelection next year after surviving a recall effort in September. It’s a way for him to take aim at the June ruling overturning the assault rifle ban, and to rebuke the Texas law that both infringes on the right to an abortion and presents an alarming subversion of legal and judicial processes.

While Newsom’s proposed bill probably stands a good chance in the California legislature, where Democrats have a supermajority in both chambers, it’s also proof positive of the warning that SB 8 presents a slippery legal precedent, as gun rights group the Firearms Policy Coalition described in an amicus brief in Whole Woman’s Health v. Jackson.

“To the extent this tactic is effective at evading or outright blocking pre-enforcement review, while still deterring protected behavior, it will easily become the model for suppression of other constitutional rights, with Second Amendment rights being the most likely targets,” the group’s attorney, Erik Jaffe, wrote in the brief.

Supreme Court Justice Sonia Sotomayor echoed that assessment in her dissent to Friday’s ruling, which allows SB 8 to stand while another legal challenge is argued before the Court, saying the Texas law would create a path for other states to “reprise and perfect Texas’ scheme in the future to target the exercise of any right recognized by this court with which they disagree.”

With Newsom’s Saturday announcement, that now appears more likely to come to pass.

“Gov. Newsom is following through on the threat,” UC Berkeley School of Law professor Khiara Bridges told the LA Times. “It’s just been academic up until now.”

As Bridges points out, the proposed bill won’t necessarily succeed. Should it become law and end up before the Supreme Court, it’s still possible judges could strike it down while leaving SB 8’s citizen enforcement mechanism intact.

“I have no doubt whatsoever that the Supreme Court will find some bizarre, disingenuous argument to distinguish gun rights from abortion rights,” Bridges told the Times.

Newsom’s proposal does, however, have the potential to underscore the absurdity of the mechanism behind SB 8, whatever the actual outcome for the gun bill. As Chief Justice John Roberts wrote Friday in a minority opinion, “If the legislatures of the several states may, at will, annul the judgments of the courts of the United States, and destroy the rights acquired under those judgments, the constitution itself becomes a solemn mockery.”